The Facebook page of the Akkeshi Distillery of KENTEN Jitsugyo Corporation announced the release of a new product in late August 2022.

This will be the eighth product in the Akkeshi Whisky “Twenty-Four Solar Teams Series”.
The 24 seasonal divisions were introduced from China. The year is divided into 24 equal parts and the seasons are named accordingly, including Risshun and Geshi.

It will be interesting to see how the Akkeshi malt, matured in Hokkaido oak barrels, will taste.

1. What is “Taisho” in the Twenty-Four Solar Teams?

Starting with the release of single malt Kanro in October 2020, Akkeshi Distillery has been selling a new product every three months as part of the “Twenty-Four Solar Teams Series”.

The eighth installment of this month’s calendar is “Taisho”.
The “Taisho” is the 12th day of the 24 solar terms, and it is the hottest season of the year during the period from the summer solstice to the Risshu around August 8, about one month after the Geshi. During this period, many festivals and fireworks displays are held in various regions, and many summer events are held.

The blended whiskies in the Twenty-Four Solar Teams Series were Rainy Water, Summer Solstice, and Great Cold, and we could sense the process of evolution with unique whiskies.

Citrus freshness, honey and other sweetness, and strong peat and spiciness. Harmony of Akkeshi malt and grain nurtured by the sea breeze of Akkeshi Bay. We can’t wait to see how it is finished.

The label is inspired by the yukata (summer kimono) of the summer festival in Akkeshi.

Information released by the Akkeshi Distillery is listed below. 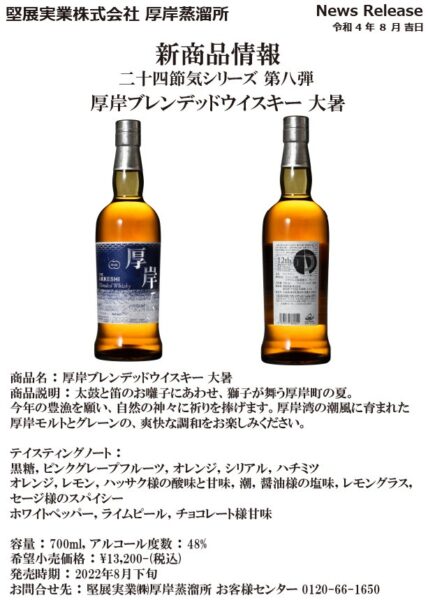 “Akkeshi Blended Whisky Taisho” is the eighth in the Twenty-Four Solar Teams Series.
In summer in Akkeshi-cho, lions dance to the accompaniment of drums and flutes. Prayers are offered to the gods of nature, hoping for a good catch this year.
Please enjoy the refreshing harmony of Akkeshi malt and grain nurtured by the sea breeze of Akkeshi-Bay.

3. Attractiveness of the Akkeshi Distillery

The distillery was the first craft whisky distillery in Japan to obtain external HACCP certification.

We overcame numerous difficulties and persisted in thorough quality control, and acquired the certification in our sixth season of operation. We feel their commitment to Japanese craftsmanship. I have high expectations for further improvement of sake quality.

For those who still do not know about the Akkeshi Distillery or want to know more about it, please check the distribution of BS Fuji’s Whiskipedia in December 2020, which had a special feature on the distillery.
The program is not only about the appeal of Akkeshi whisky, but also about the nature of Akkeshi-cho, the fishing industry centering on oyster fishing in Akkeshi, and the marriage of whisky and oysters from Akkeshi.

4. “Twenty-Four Solar Teams Series” of Akkeshi Whisky released in the past.

Let’s review the Twenty-four Season Series released by the Akkeshi Distillery in the past. 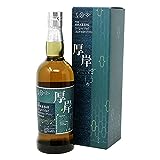 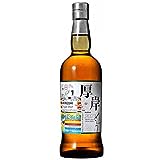 【Review】Akkeshi Single Malt Japanese Whisky Seimei
The key malt is all Hokkaido Mizunara. After a good richness and bitter sweetness, a tidal peat taste comes up softly. This is the taste of Akkeshi.