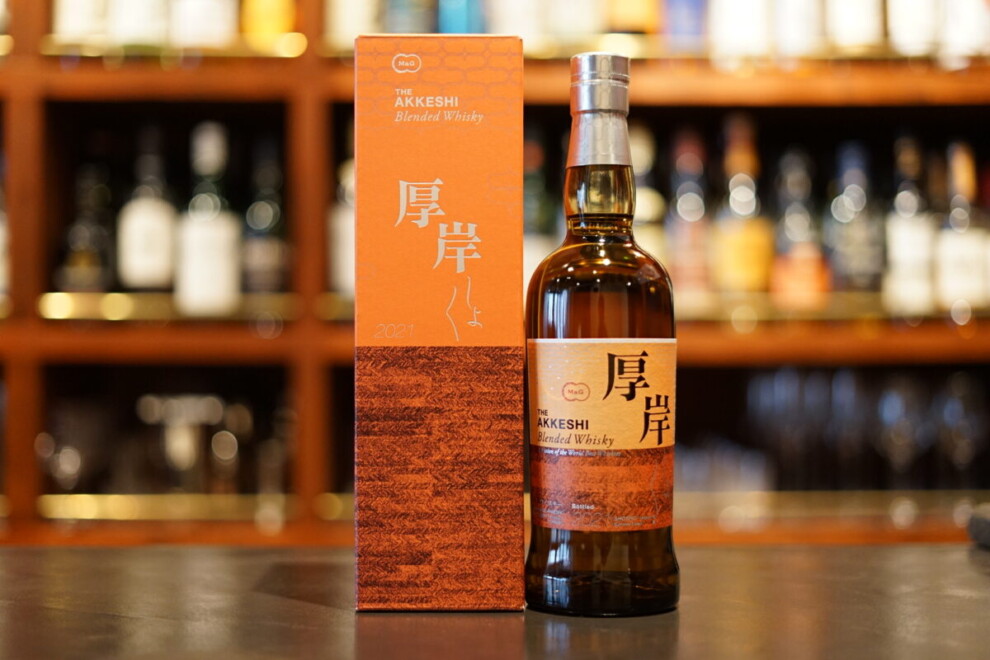 Akkeshi Blended Whisky Shosho, the fourth in the “24 Season Series” of Akkeshi Whisky, is limited to 10,000 bottles. This is the first release in three months since the last single malt Japanese whisky boushu release.

This 24-season series will be released alternately as single malt and blended, and this time it will be blended.
“The year is divided into 24 equal parts, and the seasons are named after them.
“Vanishing heat is the fourteenth of the twenty-four seasons. It is the 14th of the 24 seasonal seasons. The word “heat” means to stop, and the heat eases and a cool breeze begins to blow in the morning and evening. It is also the time of harvest for grains and other crops, but it is also the arrival of the typhoon season.
As the 24 solar terms are not fixed dates, they change from year to year, and in 2021, the first day of summer will be August 23. In 2021, the summer heat will be on August 23, and the summer heat will last for about 15 days from August 23 to September 7, which is the 15th day of the 24th solar term, Hakuro.

The first release of the 24 Season Series in October.

Deep fog with tidal air, clean air, and abundant peat. We began distilling in 2016, believing that the climate of akkeshi, Hokkaido, would create the unknown flavors of Japanese whiskey that we were seeking.
Just like the whisky making process on the island of Islay, we use water that passes through a layer of peat for the brewing water, and the whisky is matured day by day in the cool, humid, and sea breezes of akkeshi.
The area around Akkeshi is rich in peat, which is essential for the flavoring of whiskey, and the varied topography of the sea, mountains, and marshland means that different flavors can be expected from each location where the peat is collected.

“With a strong desire to produce whisky like Islay malt using traditional Scottish methods, we installed equipment made by Forsythe in Scotland. Forsythe’s craftsmen came to Japan to carry out all the work. The shape of the pot still is a straight-headed onion shape, similar to those of some distilleries in Islay. Heating is by a radiator system, the attached condenser is a shell and tube type and the mash tun is a semi-loiter type.
The fermentation tank (washback) is stainless steel, and we dare not adjust the temperature. The craftsman determines the timing of fermentation while letting nature take its course.

In addition to bourbon and sherry, difficult-to-obtain “mizunara” oak is used for maturing barrels. In addition to bourbon and sherry, we also use hard-to-find “mizunara” oak barrels.
In addition, barley, the raw material for whiskey, is grown in Akkeshi, and all the barley, including peat and wooden barrels for aging, is produced in Akkeshi. As a new initiative, in August 2021, we will start a trial production of the original whiskey distilled at the Akkeshi Distillery. Maturing in Furano In August 2021, a new initiative was launched to test distilled spirits from the Akkeshi distillery. What kind of changes will be brought about by the undiluted whiskey matured in Furano? This is exactly the kind of terroir that takes advantage of not only the local Akkeshi but also the great character of Hokkaido. The idea of “terroir,” which wine connoisseurs have probably heard a lot about, has been incorporated into whiskey, and the fusion of the “character of Akkeshi” and the “character of Hokkaido” to create whiskey that takes advantage of the terroir of the land is fascinating, and the expectations are endless.

Lake Akkeshi and Bekanbeushi Marsh around Akkeshi Town are registered wetlands under the Ramsar Convention. The Ramsar Convention is a treaty on wetlands adopted in Ramsar, Iran on February 2, 1971, which aims to conserve and wisely use wetlands as habitats for waterfowl and other wildlife under international cooperation.
We aim to be a distillery that protects and coexists with this rich nature.
The intake for the drinking water used for whiskey is the Homakai River upstream of the oboro River, which runs near the distillery. The area around the distillery is a marshland and a habitat for the baikamo, which is said to live only in clear streams. The small white flowers that bloom in the summer season are a symbol of the rich water. This water nurtures the whisky of the Akkeshi. Most of the whiskey is aged for four years. Bourbon barrels are the main ingredient, and the phenol value, which represents peat, is 20ppm.

The second blended whisky, “Blended Whisky Usui”, was mainly made from 3 years old sake, but “Blended Whisky Shosho” is mainly made from 4 years old sake. The composition of the raw material is mainly bourbon barrels, adjusted with sherry and wine bar rels.
Some people who have already drunk this whisky may feel that it has a more aged feel.
In addition, the peatiness and sweetness unique to the Akkeshi has been brushed up with each release, and this one has a complexity that is hard to believe for a blended beer, a maturation feeling that is even deeper, and a gentle peaty aroma with a phenolic value of 20ppm. The sweetness that lurks in the peat is still present in this release. It is a blended whisky with a complex and refined taste, and you can enjoy the peatiness of the Akkeshi brand, which has both “peat” and “sweetness”.

That unique peaty taste of Akkeshi is no longer an exaggeration to say “Akkeshi brand”.
It is a blend of malt from various barrels, including peated malt, and imported grain aged in the Akkeshi region. “Even the blended whisky “Usui” had a very rich aroma and heavy flavor that made me think it was like a single malt. I believe that the various aromas and flavors that come out in multiple layers are the result of the Akkeshi Distillery’s dedication to the creation of raw materials and the maturing environment of the Akkeshi region.

The Akkeshi Distillery’s future plans include growing barley, the raw material for whiskey, in the Akkeshi area, and producing all of its whiskey, including peat and wooden barrels for maturation, in the Akkeshi area, with the aim of creating an “all-star” whiskey in the future.
This year, too, it seems that the sowing of Akkeshi barley was successfully completed in mid-May. “It seems that preparations are steadily underway for the “Akkeshi All Star.
They are also stepping up their efforts to use Hokkaido barley (Furano, Nakashibetsu) as a raw material, and although the Hokkaido barley they tested in 2018 cost more than twice as much as the Scottish barley and had an alcohol yield of about 80-90%, the flavors were Japanese (warm tangerine, roasted chestnuts, dense roasted sweet potato). From 2019, they will be producing about 10% of the distillery’s barley from Hokkaido.

If you want to know more about the Akkeshi Distillery, it was featured on BS Fuji’s Whiskipedia in December 2020, so be sure to check out that distribution.
The program is not only about the charm of Akkeshi whiskey, but also about the nature of Akkeshi town, the fishery centering on oyster fishing, and the marriage of whiskey and oysters from Akkeshi.

■Please also check out other articles about “Akkeshi Distillery and Akkeshi Whisky”.

If you want to know more about Japanese whisky, which is a worldwide trend, and want to learn more about it, we highly recommend these books.

This is a book written by Mamoru Tsuchiya, a world-famous whisky critic and representative of the Whisky Culture Research Institute, titled  “Japanese Whisky as a Culture that Works for Business”.
The book covers the basics of whisky, the introduction of whisky to Japan, the birth of Japanese whisky, advertising strategies and the rise of Japanese whisky, and the current rise of craft distilleries. This is a book that summarizes Japanese whisky in a very easy to understand way.