This time, we would like to introduce “Akkeshi Single Malt Japanese Whisky Seimei” from “Akkeshi Distillery” located in “Akkeshi-cho” in the east of Hokkaido.

President Hida, who had no experience in whisky production, much less liquor production, was impressed by Ardbeg 17 years old and decided to make whisky in Hokkaido, aiming to create a smoky whisky like Islay malt.

They selected Akkeshi, which has a cool and humid climate similar to that of Islay, as their site and began operations in 2016 with a strong desire to “make a whisky like Islay malt using the traditional Scottish process”.

For the first three years, the company released four bottles of the Newborn series, aged less than three years. After that, Saron Kamui was released; the Twenty-Four Season series started with Single Malt Kanro, which was released at the end of October 2020. The Akkeshi Single Malt Seimei will be the seventh in the series. 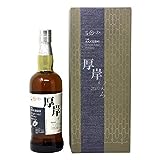 The fourth in the Nijushisekki series, “Akkeshi Blended Whisky Seimei,” has been making great strides worldwide, winning the “World’s Best Award” in the blended whisky category at the World Whisky Awards 2022 (WWA2022).

The film looks at the charms of the Akkeshi distillery, including the location of the distillery, its environment, and various other information.

How was it for those who watched the show?

If you enjoyed it, please subscribe to our channel.

厚岸蒸溜所 シングルモルト 清明 ５５°７００ＭＬ
created by Rinker
厚岸
¥42,910 (2023/02/08 01:48:44時点 Amazon調べ-詳細)
【Review】Akkeshi Single Malt Japanese Whisky Seimei
The key malt is all Hokkaido Mizunara. After a good richness and bitter sweetness, a tidal peat taste comes up softly. This is the taste of Akkeshi.

Other information about Akkeshi Distillery

If you are interested in “Akkeshi Single Malt Seimei” and “Akkeshi Distillery”, please take a look at other information.

Youtube video distribution of Japanese Whiskey Dictionary , the 4th installment! This time, we will introduce …