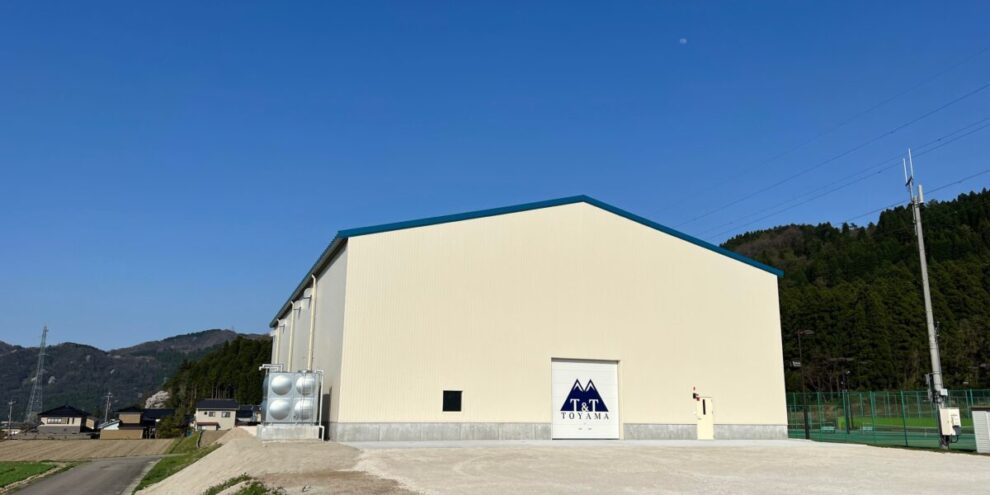 Construction of the Inami Matured Warehouse for T&T TOYAMA, a joint project by Takahiko Inagaki of Saburomaru Distillery and Komei Shimono of Malt Yama, was completed on April 22, 2022.

As the world’s first Japanese whiskey bottlers business, the casks of whiskey collected from several distilleries in Japan have been stored in a warehouse at Wakatsuru Shuzo’s Saburomaru Distillery, but will be moved to the Inami warehouse to continue maturing.

The I nami facility will be equipped with a tasting space, tables, and a naming board. 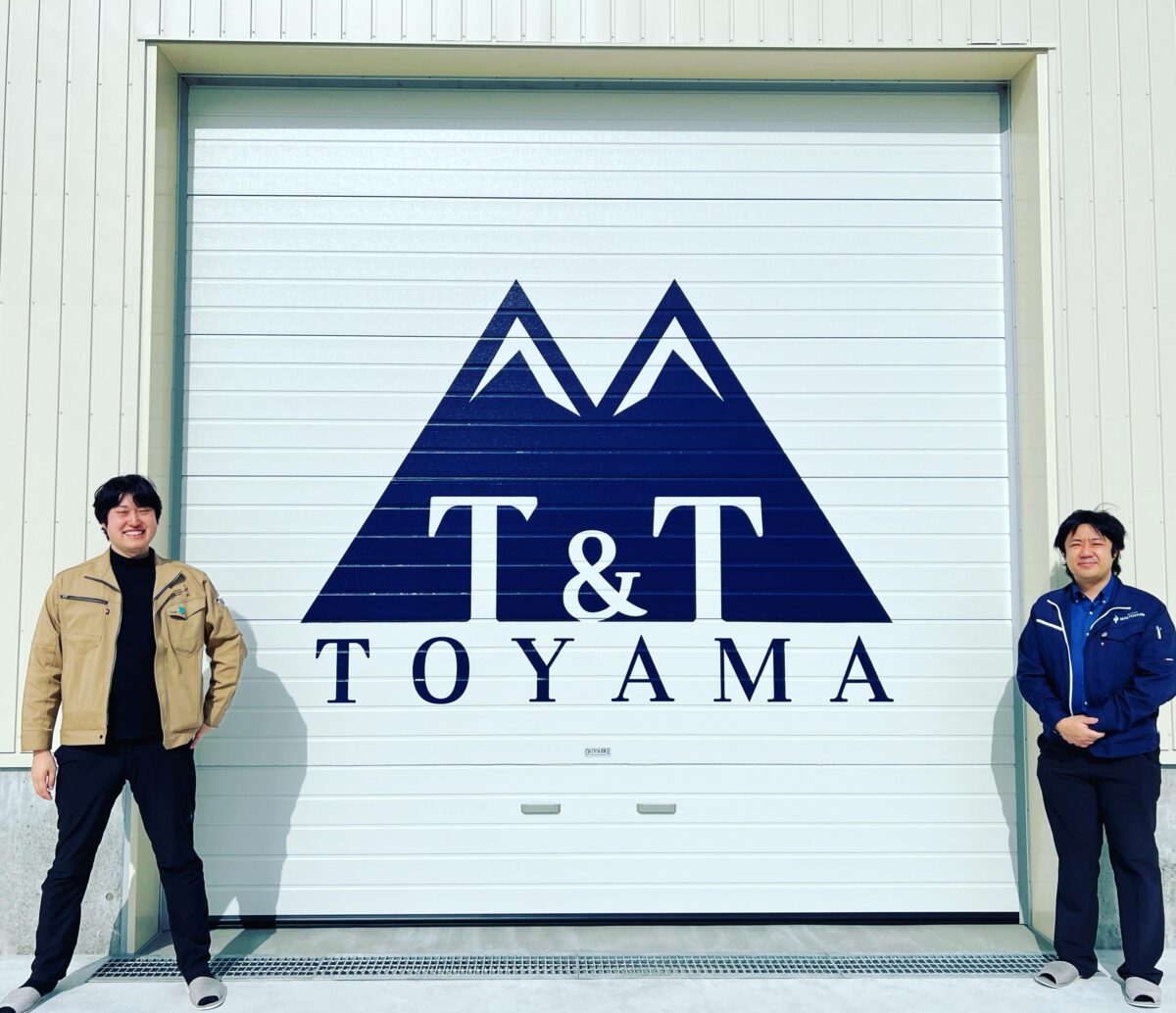 Bottlers’ whisky is whisky that is purchased from distilleries by a bottling company separate from the distillery, aged and bottled in its own way, and then sold with its own label.

We purchase Japanese craft whisky distilleries’ original whisky, especially pre-aged new pot, and mature it in our own “T&T TOYAMA Inami Matured Warehouse” in Inami, Nanto City, Toyama Prefecture, using special casks that we have procured ourselves, and then find the best timing for maturation. We will continue to be the world’s first full-scale Japanese whiskey bottler to bottle “Single Cask & Cask Strength” at the peak of its production.

For more information on the Japanese Whiskey Bottlers business, please also check out our crowdfunding campaign in May 2021.

Now I would like to get to the main topic of this article.

I will explain about T&T TOYAMA’s “Inami Aged Storage” which was completed this time.

It is a region of scattered villages surrounded by fields and dotted with houses, where the air is clean and rich in nature, and humidity is maintained at a moderate level throughout the year. The temperature is relatively stable and the environment is ideal for slowly nurturing whiskey. 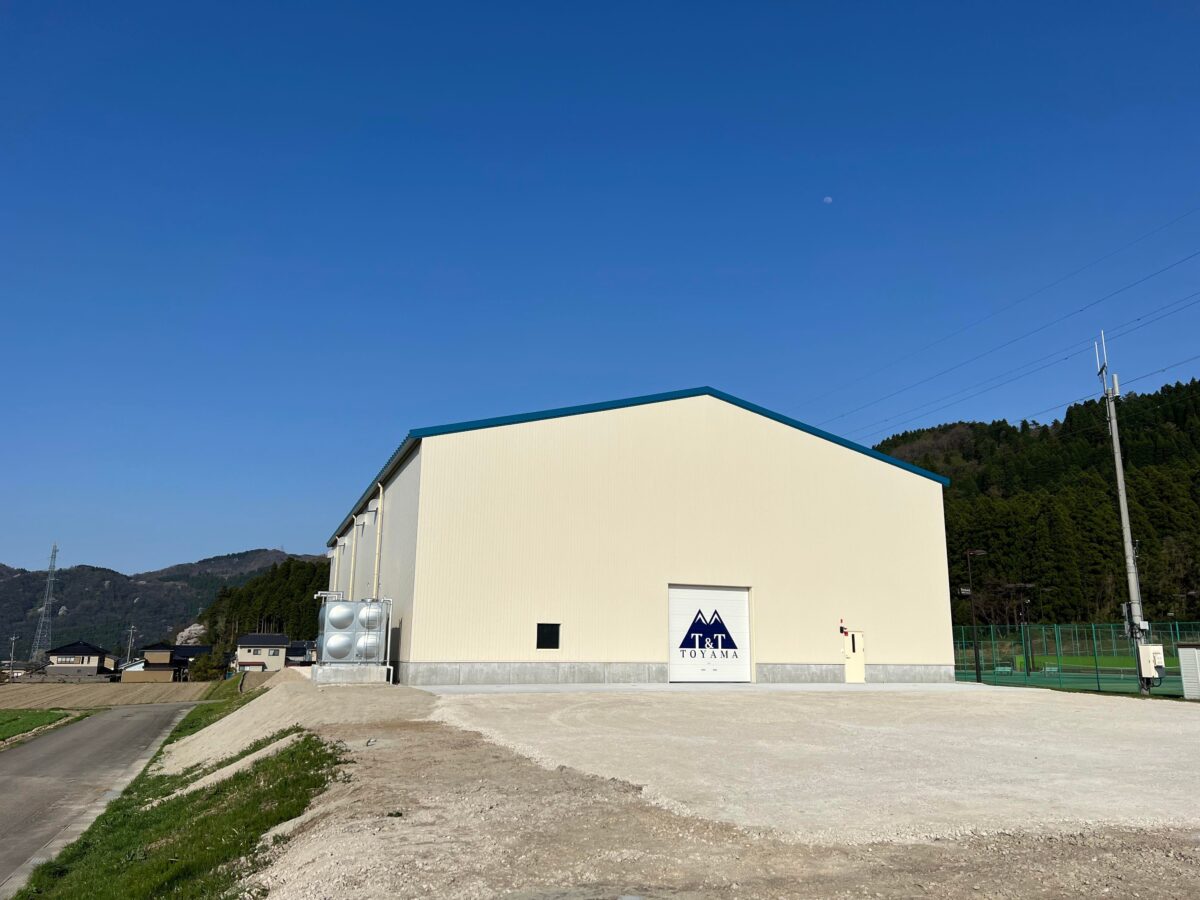 Once the tour of the aging cellar begins, I am curious about the sightseeing and dining options in the area.

3-2. The process of building the ripening room

The Inami ripening room, from the start of construction to during construction, is available on Youtube by Mr. Shimono.

You can see the beautiful natural surroundings and how the construction of the ripening room is progressing.

3-3. Specifications of the ripening room

This is a wood-framed aging house with a maximum storage capacity of 5,000 casks (barrels). 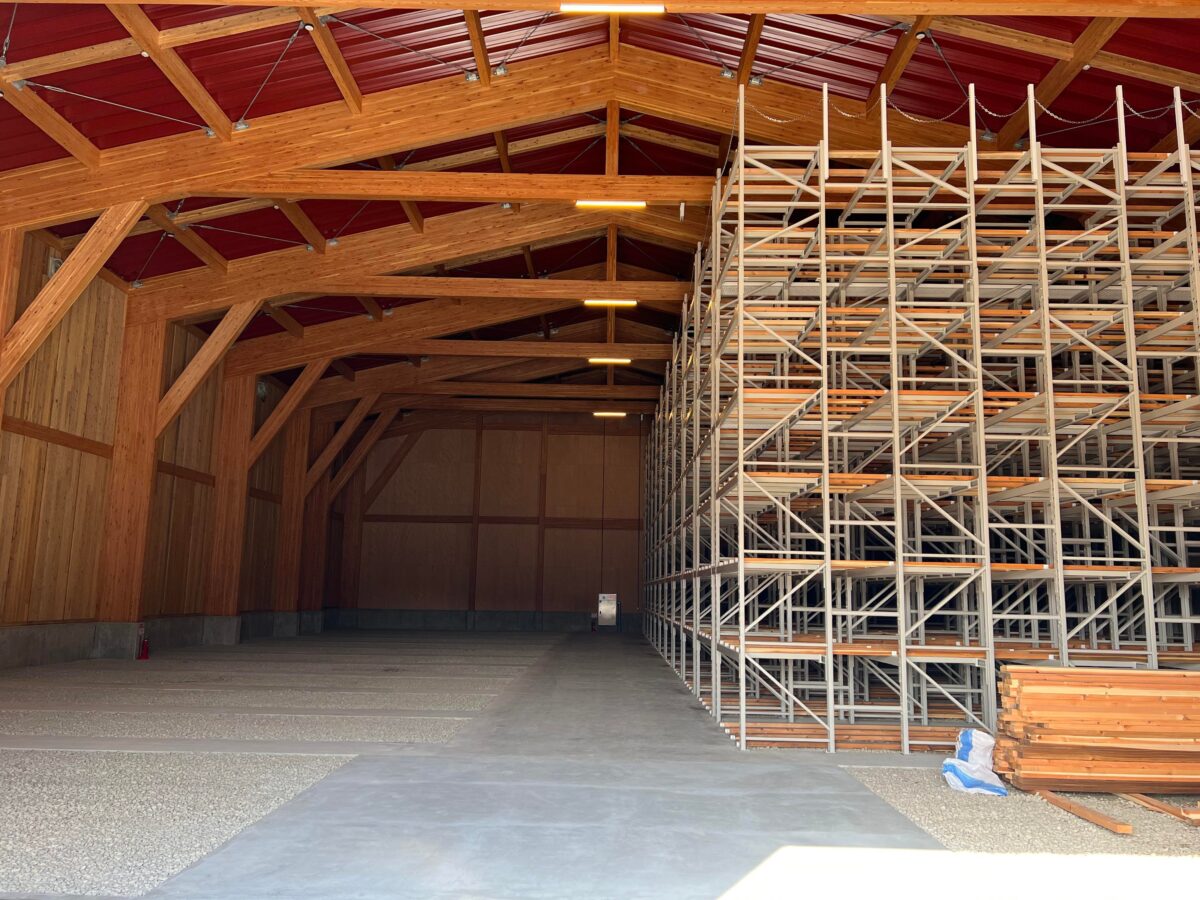 As mentioned in the previous section, the Iba Maturing Vault is made of abundant wood and has excellent heat insulation and regulation properties, creating a comfortable space inside the vault where you can feel the grain and texture of the wood.

In such an environment, a tasting space will be set up where visitors can enjoy whiskey while relaxing.

According to the crowdfunding information, the tasting table will be made of bubinga wood, which is now rare and carefully selected by Mr. Shimono, and the tasting space as well as the cellar will be one of the highlights of the project. 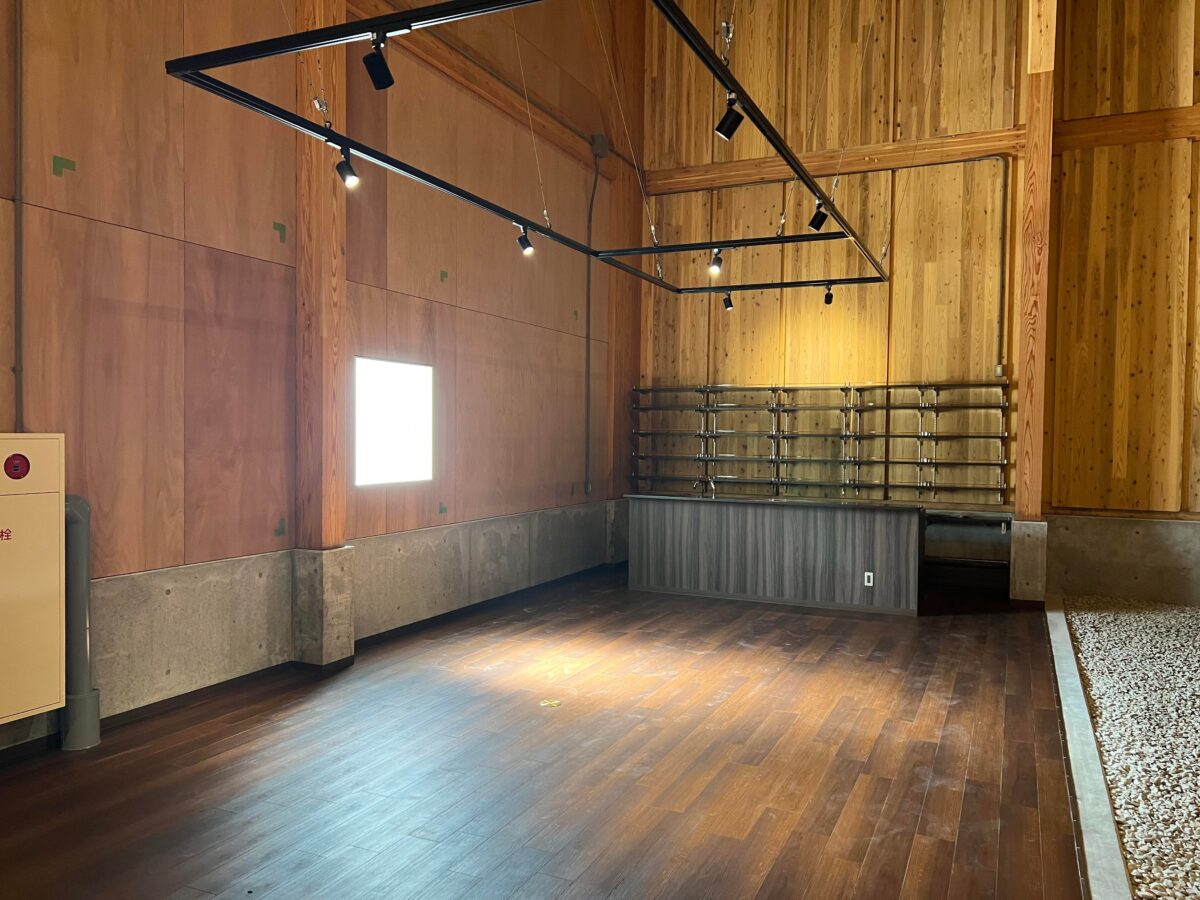 What we are interested in is which partner distilleries provide the original sake to “T&T TOYAMA” .

Mr. Inagaki and Mr. Shimono visited distilleries all over Japan and selected the following 6 distilleries from those that met their own criteria and agreed to participate in the project. (as of the crowdfunding in 2015)

Many of you may know the local whiskey “Akashi” when you hear it.

A sake brewer founded in 1888 in Akashi City, Hyogo Prefecture, this company has a long history, having obtained a whiskey production license in 1919. In recent years, the facilities have been renovated, and the whiskey to be produced in the future is expected to be even more promising. Recently, the double blenders’ program realized through an exchange of sake with Nagahama Distillery was also a topic of conversation. 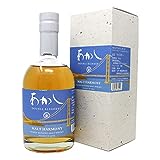 Kuroki Honten is a long-established shochu distillery known for its “Hyakunen no Kodoku” “Yamaneko” and “Yamazaru” . Inspired by the Edradower distillery in Scotland, Toshio Kuroki, the distillery’s predecessor, built this distillery in the mountains. His son, Shinsuke Kuroki, who succeeded him, started making whiskey in November 2019.

At the recent Whisky Festival, they served Newborn aged in chestnut barrels. This is an unusual approach with a Japanese flavor that will be watched closely in the future. In addition to whiskey, they are also enthusiastic about producing gin.

A long-established authentic shochu distiller with over 170 years of history in the mountains of Hioki City, known for such products as “Satsuma Hozan” and “Tenshi no yuwaku” A whiskey distilling facility will be constructed in 2019.

All of the barrels used for maturation are old sherry butts. The company’s policy of being particular about the raw materials used, and its experience in shochu production, is utilized in the careful production of its whiskey.

It may not be long before they become the Japanese version of Macallan. 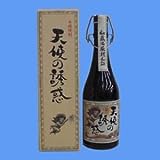 Established in 1883, Kagoshima Prefecture’s Komasa Jozo is a brewer whose main product is the authentic shochu called kozuru.
Taking full advantage of the authentic shochu production technology it has cultivated over the years, the company acquired a whiskey production license in 2017 and began operating the “Komasa Brewery Kanosuke Distillery” as a new stage of challenge. The distillery has some unusual features not found in other distilleries, such as using empty barrels of Mellow Codzu, a barrel-aged shochu liqueur invented by the distillery’s predecessor, Kanosuke, for maturing whisky. 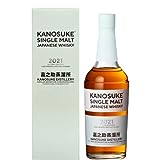 A long-established brewery founded in 1918. In fact, it has a deep history in whiskey making, producing and selling malt whiskey from 1938 to 1989.

In 2018, in order to take on the challenge of new possibilities in Western whiskey making, new equipment was installed and the Sakurao Distillery was established.
In 2021, the company will simultaneously release two single malt whiskeys,  “Sakurao” and “Togouchi” which have been aged for three years. In addition, the craft gin “Sakurao Gin“

has become the main product of the Sakurao Distillery.

This sake brewery has a very long history in Hokuriku, having started sake production in 1862 in Saburomaru Village, Tonami County, Toyama Prefecture. After the end of World War II, in order to break out of a deadlocked situation, they independently researched distilled spirits production and obtained a license to produce whiskey in 1952, and began selling “Sunshine Whiskey“

In 2016, they launched the “Saburomaru Distillery Renovation Project” and challenged crowdfunding to secure funds, calling for the passion for whiskey making that they have kept for over 60 years and the challenge of developing it into a world-class whisky distillery. The company has re-started as a.

Most recently, the third batch and force batch of “Far Eats Of Peat” which was created through an exchange of original spirits with the Eigashima distillery, were released.

Lottery entries were submitted through Wakatsuru Brewery’s online store “Me and ALC” but unfortunately, the deadline has already passed and applications for the lottery sales have been closed.

This is a rare whiskey that we hope you will drink when you see it at a BAR near you.

5. Last but not least

However, a boom in a bubble state always has a shadow and gradually enters a period of stagnation. In light of this past rule of thumb, it can be said that the Scottish bottlers have contributed to the creation of an industry structure that supports each other, as they have done in the past.

T&T TOYAMA will not only create whiskies with various flavors and tastes that differ from the official products of each distillery, but may also play a role in supporting the whisky industry as a whole. In this sense, the future of T&T Toyama will be the focus of more and more attention.