Information on the release of “Single Malt Yoichi Grande and Single Malt Miyagikyo Grande” has been released on the official website of Asahi Breweries, Ltd.
The release date is April 12, 2022. Limited quantities.List price: 10,000 yen (excluding tax). Product for duty free stores at airports.

The bottle further accentuates the individuality of the Yoichi and Miyagikyo brands. The bottle is a bit “peaty” for Yoichi and “elegant” for Miyagikyo.
Both bottles use the “non-chill filtered” method, which preserves a richer flavor profile. The filtration process is carried out at room temperature without cooling, resulting in a richer aroma and more complex flavor.

The “Grande” in the product name is intended to make the product features easier to understand for both Japanese and foreign consumers.

The bottle is for duty-free stores at airports, so it may be difficult to obtain for the general public, but if you are planning to go abroad, please check it out.

This product brings out the unique characteristics of the sherry cask malt and new cask-aged malt that support the elegant and gorgeous flavor of “Single Malt Miyagikyo” . It features a rich, sweet aroma with a hint of dried fruit derived from sherry casks, a fruity and mellow flavor reminiscent of pears, a cacao-like aroma, and a long-lasting bitter aftertaste.
Reference: News Release｜Asahi Beer

Yoichi Distillery in Hokkaido is known as the “Scotland of Japan. Its predecessor, Dai Nippon Kaju Co., Ltd. was established in 1934 by Masataka Taketsuru a.k.a. Massin. Masataka Taketsuru was a great admirer of the Scottish Cool and humid climate, abundant water sources and dignified clean air Yoichi is located at the base of the Shakotan Peninsula, west of Otaru, and was selected from a variety of possible sites. Masataka Taketsuru’s goal for his first distillery was to create a heavy and powerful malt whisky. He was determined to reproduce the whisky-making methods he had learned at distilleries in Scotland without making any compromises. The symbol of this commitment is the “Brewer’s Whisky. Straight head pot still and direct coal-fired distillation. This produces a heavy, aromatic, heavy peat base, resulting in a unique single malt with a peaty, salty aroma. This distillation method is based on the Longmorn distillery, where Taketsuru himself studied. If it is necessary to produce authentic whisky, we will follow it, even if it is inefficient. Such passion, which can be called the origin of Nikka Whisky, and Masataka Taketsuru’s desire to achieve his dreams are still being passed down today. 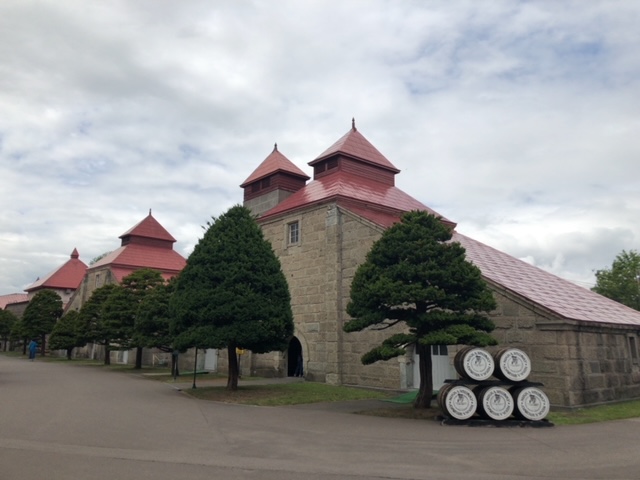 It has been about 30 years since the first distillery was started in Yoichi, Hokkaido. Masataka Taketsuru, who believed that “blending multiple original whiskies from different distilleries makes whisky richer and richer in flavor” desperately needed a second distillery. Taketsuru chose Miyagikyo in Sendai. Miyagikyo Gorge in Sendai, a lush green gorge blessed with two clear streams, the Hirose River and the Shinkawa River. On his first visit to this area, Taketsuru drank Black Nikka he had in the clear water of the Shinkawa River and confirmed the taste. It is said that he decided to build the distillery on the spot. The Miyagikyo Distillery is proud of its Cafe-style continuous distillation machine. At the time of its introduction, this distillation machine was already considered obsolete. Because it is an old type, it tends to leave a lingering taste, but Taketsuru chose this old type distillation machine because it is possible to transform it into the original aroma and sweetness of the raw materials through technology. At Miyagikyo Distillery, the people who inherited Taketsuru’s passion continue to make various attempts in pursuit of the deliciousness of whisky. 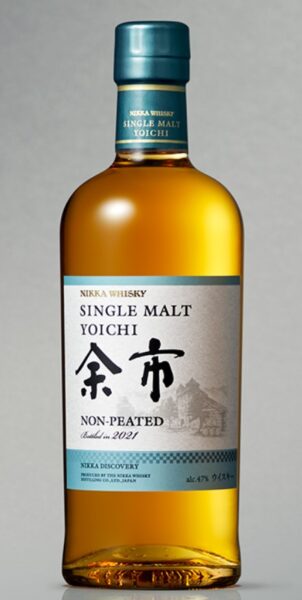 Although the taste is non-piped, the overall flavor is slightly sweet with a powerful assertion of malt from direct coal-fired distillation, as one would expect from Yoichi, and the fruity aroma is followed by a sweet and savory aroma like buttered toast. It gradually gives way to a bitter aftertaste. The sweetness brings the whole thing together nicely, and it is a whisky that comes together with a fruity, all-encompassing sweetness that is unlike any other Yoichi we have ever tasted. 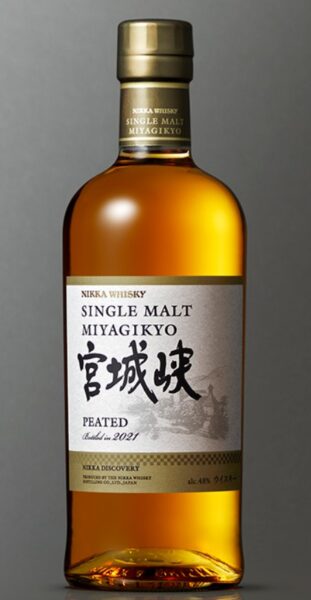 The originally gorgeous and fruity Miyagikyo dares to use only peated malt. While making the most of Miyagikyo’s character, the addition of peat gives this whisky a good balance between the mellow, light sweetness of Miyagikyo malt and a strong peat taste.

The aroma is somewhat hidden by the peat, and it is easy to detect the sweetness of the oak and vanilla, but as time goes by, the pleasant peat comes to the forefront. The taste is a mix of dark berry sweet and sour, vanilla sweetness, and rich cocoa chocolate sweetness with the peat at the core, but the peat asserts itself again at the end. The strong, thick flavor of “Single Malt Yoichi” is further aged in apple brandy casks to achieve a harmonious combination of rich sweetness and peat richness. The aroma is sweet and malty and rich, like apple compote, and the flavor is savory and sweet, like baked goods reminiscent of apple pie or fruit cookies, followed pleasantly by a hint of peat and barley sweetness. The gorgeous, light “Single Malt Miyagikyo” is further aged in apple brandy casks to achieve a harmony of refreshing sweetness and soft astringency. It has a calm, woody oak aroma, sweet and floral aroma, fresh apple lushness, and a sweet and sour taste reminiscent of fruitcake, with the bitterness and sweetness of the oak slowly followed by a cinnamon-like spiciness.

The powerful and thick tasting “Single Malt Yoichi” is further aged in Manzanilla casks to create a harmonious blend of fruity sweetness, richness, and savory peat. You will enjoy the aroma of tropical fruits such as peach and papaya, sweet and sour notes reminiscent of shortcake, and a lingering peat aftertaste reminiscent of a bonfire.

The gorgeous, light “Single Malt Miyagikyo” is further aged in manzanilla casks, and features a harmonious combination of mild sweetness and soft bitterness. The single malt Miyagikyo has a sweet aroma reminiscent of dried fruits, coconuts, and milk chocolate, and a slightly bitter aftertaste derived from the barrels.