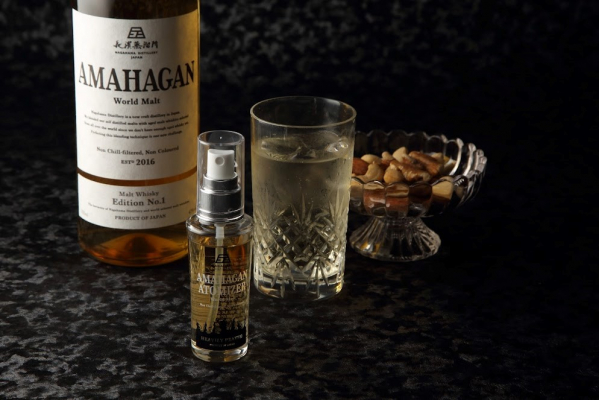 In line with the catchphrase,  “One push and the chase peat“ the AMAHAGAN Atomizer is bottled in a perfume atomizer with approximately 50ppm of heavily peated base alcohol blended at the Nagahama distillery. They say you can feel the peat right away with just one push!

The unique shape of the pot stills installed in the distillery reminds us of the very origin of whiskey making.
Nagahama Distillery was originally a rice warehouse from the Edo period, which was renovated and started making beer in 1996. Later, in 2016, facilities for whiskey making were installed. The building has a vaulted ceiling, with a saccharification tank and distiller on the first floor, and a crusher and fermentation tank on the second floor.
There are two first distillation and one redistillation pot stills, and the heating system is an alambic type pot still shaped like an indirect steam gourd, a pot still often used for brandy distillation. Among Japanese craft distilleries, only Nagahama Distillery currently uses this alambic type pot still. The feature of this distillery is that it has the merit of producing a clear, soft, and less cloying liquor.

For more information about Nagahama Distillery, see also this article.

One push injects about 0.15 ml, so one bottle can be used about 250 times. Use it on highballs, of course, but also on shochu or cocktails, and you’re sure to have an interesting drink!

And not just for booze, use it on oysters, cheese, and other snacks for an accent that takes it up a notch! The marriage of oysters and peaty whiskey is especially wonderful, and because it is so easy to enjoy, this item is a must buy for oyster lovers in particular.

■ Please take a look at other products and articles from Nagahama Distillery.

Release information on the release of “Single Malt Kanosuke” from Komasa Kanosuke Distillery Co. The …