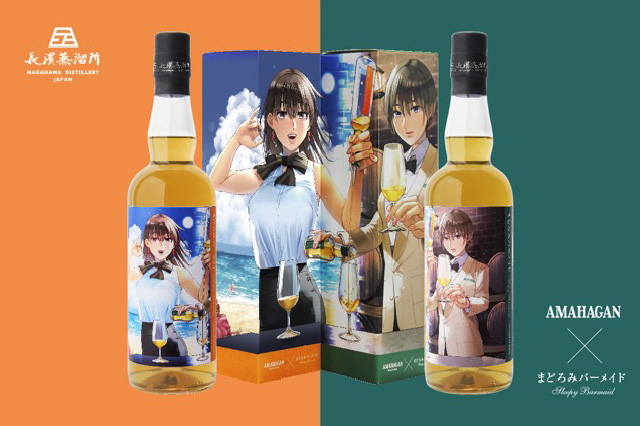 Reservations began on June 21, 2022 on a first-come, first-served basis at the official online store of Nagahama Distillery, and were sold out in about 2 minutes.

It will be available at liquor stores nationwide from July 12, 2022 (Tuesday).

This is the second AMAHAGAN Sleepy Barmaid Bottle. Kiho Ibuki’s caring and sisterly nature and her gentle but sometimes passionate personality are expressed in this blended malt based on sherry casks. The dignified behavior of the bar counter is accentuated with approximately 50ppm of smoky malt. Citrus aromas reminiscent of orange from the malty flavor. Red berries and rum raisins from the sherry casks, and moderately soothing tannins tighten the flavor. 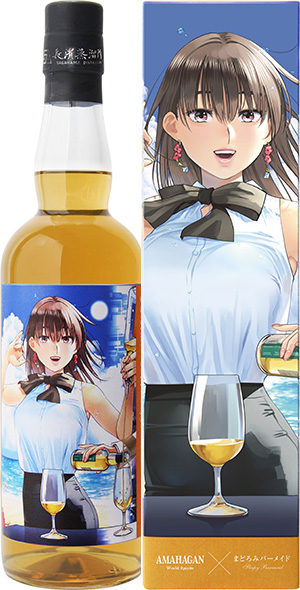 This is the third AMAHAGAN Sleepy Barmaid Bottle. The innocent and cheerful personality of Hiyoko Yonosaki, who has a solid core and skill, and who pioneers the way with her outlandish ideas, is expressed in “World Spirits,” a blend of Awamori and malt whisky stored in oak barrels that defies conventional boundaries. The attack is firm oak and vanilla from new oak barrels. The malt flavor is combined with the delicate, soft sweetness of Awamori and rises as a mellow aroma.

The base spirit is Awamori distilled at Okinawa’s oldest brewery, Niisato Shuzo, and aged in stainless steel tanks for three years to settle the flavor, and then aged in American oak barrels for an additional seven years or more. The barrel aging process gives the Awamori a darker color, and because it is considered a liqueur under tax law, a minimum amount of extract (reduced syrup) is added. The original brew is blended with Nagahama Distillery’s overseas malt whisky to bring out the best in each other, and then carefully mulled over.

(Quoted from the official website of Nagahama Romantic Beer)

This is a sequel to the first AMAHAGAN x Sleepy Barmaid collaboration, “AMAHAGAN World Malt Sleepy Barmaid Bottle – Yuki Tsukikawa,” which was released on February 8, 2022.

The second and third bottles have a label design that connects the pictures when placed side by side, and the recipe has been tried and tested so that the two bottles can be enjoyed when blended together, as shown on the label.

The Kiho model was crisp, sharp, and spicy. It also gives the impression of a cool yet passionate person who fought for her pride, as Kiho showed in the bartender showdown program “Barman Platinum”.
The Hiyoko model also had a gorgeous aroma and strong sweetness. The fact that it also contained Okinawa awamori gave me the impression of both the sun-like freshness of Hiyoko’s surname “Yonozaki” and the sweetness that represents Hiyoko’s coquettishness.
When I mixed equal amounts of the two types, added a little water, and drank it straight, I found that it tasted even richer or thicker than if I drank it by itself, and it was a very delicious and strange experience. The illustration on the box was also a difficult order to make, as it is easy to see at a glance that the drink is both stand-alone and can be mixed with other drinks.

Sleepy Barmaid is a manga work featuring three female bartenders serialized in Weekly Manga Times (Houbunsha). The manga has been well received for its beautiful artwork, extensive knowledge of sake, and introduction of the latest bar tools and bottles; it was also adapted into a TV drama in 2019.

The first collaboration bottle model, Yuki Tsukikawa, provided the recipe for the Twist Cocktail (an arranged cocktail that is a partial modification of an existing cocktail recipe), which is her specialty in the manga, and the TV drama was interviewed and technically provided by Shinobu Ishigaki, owner-bartender of Bar Ishinohana, who is known as “the best bartender in the world”. If you like bars and cocktails, you will be satisfied with both the manga and the drama.

There are many works with bars as their subject matter, such as “Bartender” and “Bar Lemon Heart”. All of them focus on slightly different aspects, but if you like bars and drinking, why not pick one up?