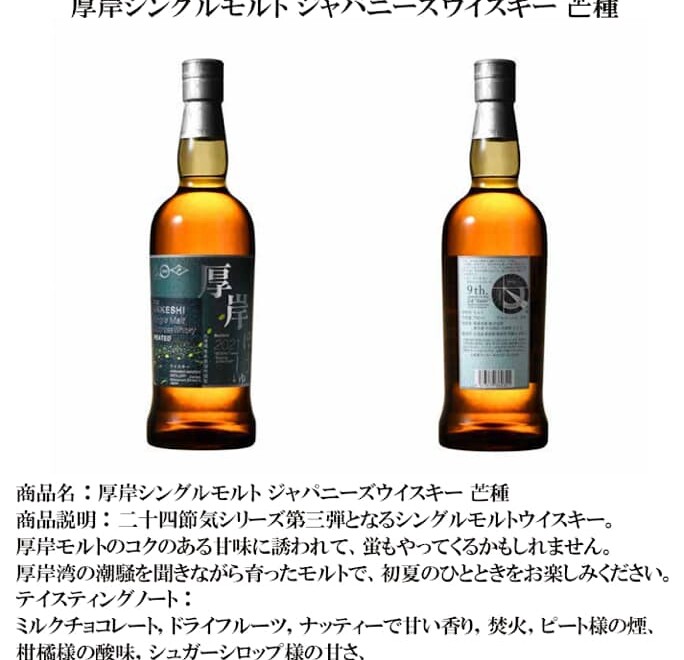 Kenten Jitsugyo Corporation, Akkeshi Distillery Facebook page announced the release of a new product in May 2021.

It is the third Akkeshi whisky “24 Seasonal Divisions Series” . It means 24 terms used to denote the changing of the seasons.

What is the “BOSHU” of the 24 seasonal divisions?

Starting with the single malt release in October 2020, the Akkeshi Distillery has been regularly selling products as the “24 Seasonal Divisions Series”.

The third one to be released is “Boshu”=芒種. The term “Boshu” comes from the season when grains with a beard or ears such as rice and wheat sow their seeds. This is the time of year when the plum blossoms turn from blue to yellow and the hundred tongues begin to sing. This is also the time when mantis and fireflies begin to appear.

The Akkeshi whisky Boshu’s label depicts the light of fireflies on a deep green base, which is quite mysterious.
In Hokkaido, the number of fireflies has been decreasing due to pesticide spraying and changes in the environment, but in recent years there has been a movement to revive the firefly population, and it seems that the number of places famous for fireflies in Hokkaido is increasing.

In the eastern part of Hokkaido, where Akkeshi is located, there are many wetlands, so it seems that “Heike fireflies” live there. The fireflies can be seen from June to August, and the design of the firefly label is perfect for this season “Boshu”.

If you have actually drunk the first “Kanro” and the second “Usui”, you will know that the main characteristic of the whisky from the Akkeshi distillery is “sweetness”. It has a peaty and complex taste, blended with peated malt and other malts from various casks.

In the Usui, the aroma and taste were very rich, as if it were a single malt, even though it was blended with grain. I believe that the various aromas and flavors that emerged were the result of the Akkeshi Distillery’s commitment to the creation of the raw materials and the maturing environment of Akkeshi.

I am very much looking forward to the third release, “Boshu,” following “Kanro” and “Usui” to see how it tastes

In addition, the name of the new product is announced as “Akkeshi Single Malt Japanese Whisky 芒種”. This has an important meaning: the Standards for Labeling Japanese whisky established by the Japan Spirits & Liqueurs Makers Association has came into effect since April 1, 2021. The label clearly indicates that the product complies with these standards.

This is a genuine “Japanese whisky” that is clearly distinct from those.

The information released by the Akkeshi Distillery is listed below. 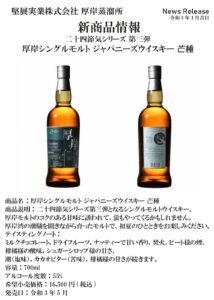 This single malt whisky is the third in the 24-Seasonal Divisions series. The rich sweetness of the Akkeshi malt may attract fireflies. Please enjoy the early summer time with the malt grown up listening to the sea noise of Akkeshi Bay.

If you don’t know about the Akkeshi Distillery or would like to know more about it, please check out the special feature on BS Fuji’s Whiskypedia in December 2020.
In addition to the appeal of Akkeshi whisky, the program is full of the attractions of Akkeshi, such as the nature of Akkeshi Town, the fishing industry centering on oyster fishing, and the marriage of whisky and oysters from Akkeshi.

Single malt whiskies released in the past

Let’s review the single malts that the Akkeshi distillery has released in the past.

Newborn (New Make) released in the past

Let’s review the Newborn (New Make) that Akkeshi Distillery has released in the past. In case you are wondering, Newborn is a whisky that has been aged for less than three years.