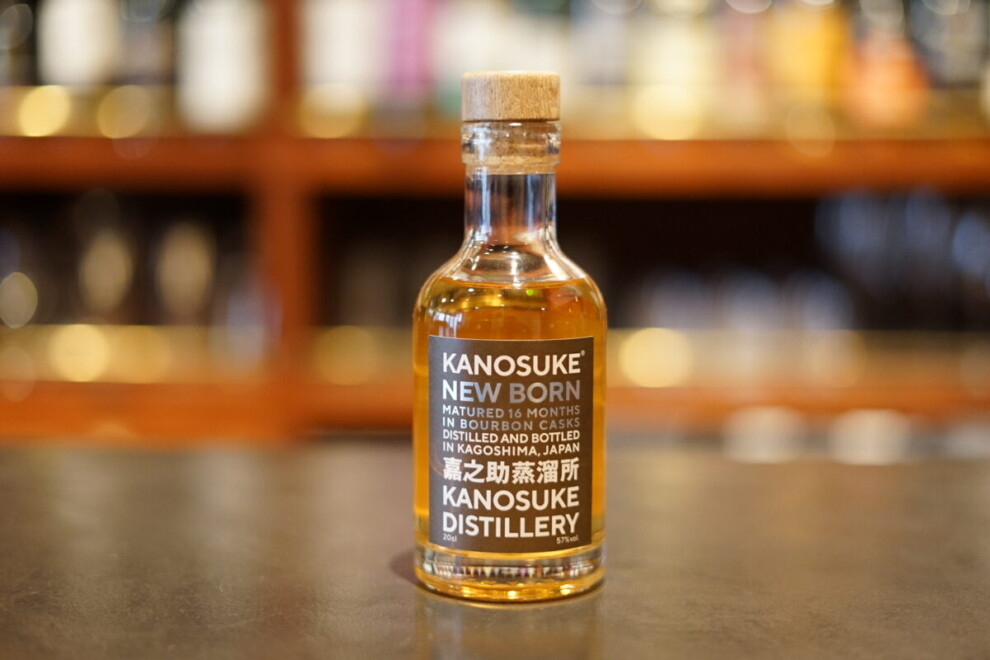 Komasa Jozo was founded in 1881 and is a very historic shochu maker, with its representative brand being the barrel-aged rice shochu “Mellow Kozuru” . Although it is a shochu maker, the company’s expertise in developing shochu aged in barrels seems to be utilized in making whiskey.
This is the second in the Newborn series from the Kanosuke distillery, which started operations in 2018. The name “Kanosuke” comes from the second generation of Kanosuke Komasa, the creator of Mellow Kozuru in 1957.
Kanosuke Newborn 2019 won the “Best Japanese New Make” award at the WWA (World Whisky Awards) 2020.
Now, the distillery is attracting attention not only in Japan but also overseas.

The Kanosuke distillery stands on a site of about 9,000 square meters by Fukiage beach on the west coast of Kagoshima Prefecture.
In addition to the distillation facilities, the U-shaped, two-story main building has a bar with a great view and a store selling original goods.
The main feature of the distillery is that it has three pot stills (large, medium, and small). Each has a capacity of 6,000 liters, 3,000 liters, and 1,600 liters.
In the world, craft distilleries usually have two stills. Whiskey is usually distilled twice, and by using pot stills with different neck shapes and upper line arm angles during the second distillation (re-distillation), the aroma and flavor of the raw material can be changed more richly.
Fukiage beach, where the distillery stands, is one of the three largest sand dunes in Japan and has been selected as one of the 100 best beaches in Japan. The beach is about 47 km long from north to south, and the strong wind rises from the surface of the sea, and the area around the distillery is covered in white mist from the fine spray from the sea. It is a place with a wide range of temperatures, with hot summers and cold winters, where it is not unusual for the temperature to drop to around 0°C and snow to fall.

For more information on the Kanosuke Distillery, you can also read this article. 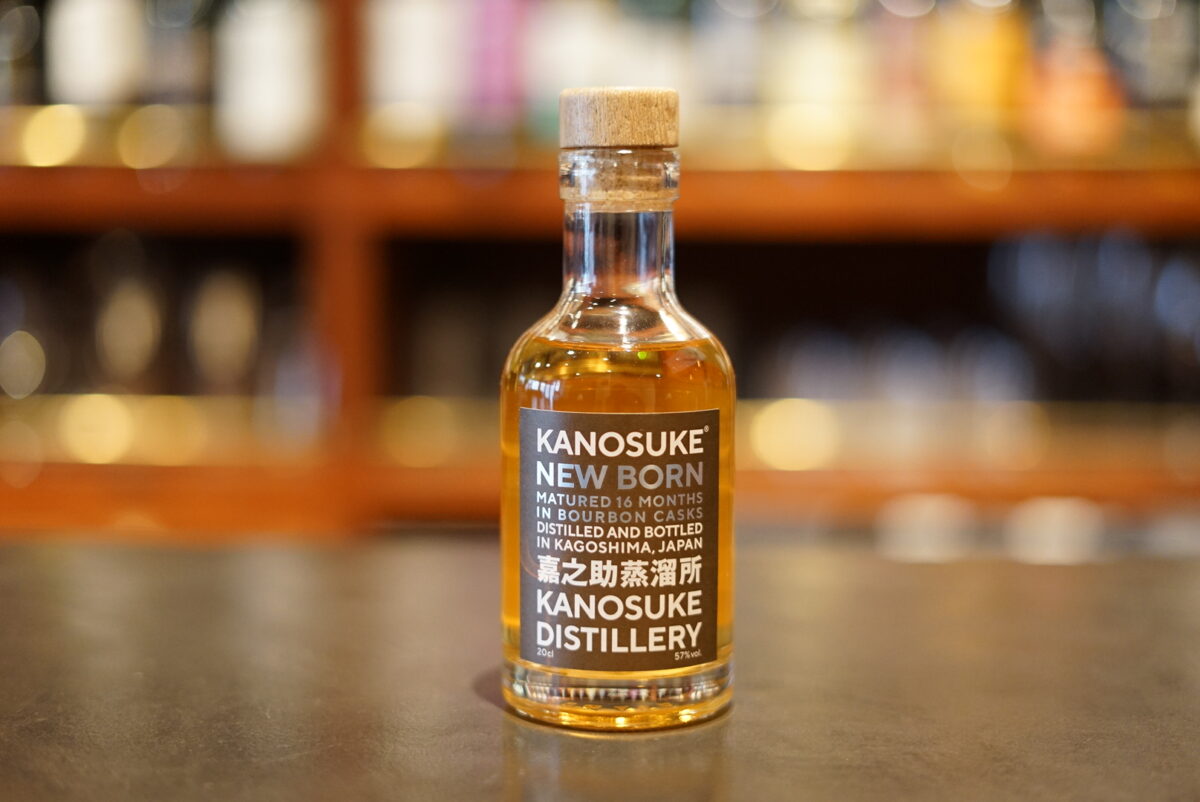 The second batch of Kanosuke Newborn, stored in bourbon barrels for 16 months.

Non-peated malt from England was used as the raw material. After fermentation with distillery yeast, it was distilled in the first distillery kettle, and then in one of the two kettles owned by the Kanosuke distillery, which has a different structure and is capable of producing liquor with body. Storage. The whisky was distilled in May 2018 and stored in barrels where bourbon whisky used to be stored. The whisky was stored for 16 months in the sea breezy Kanosuke distillery cellar before being bottled at cask strength.

Newborn is a young whisky that is still in the process of maturing (less than 3 years old). 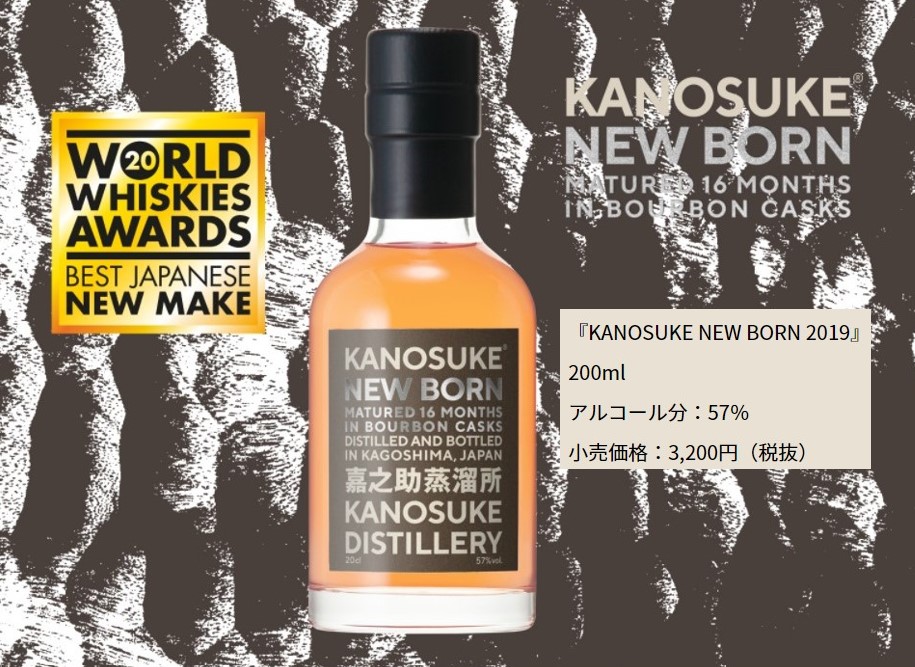 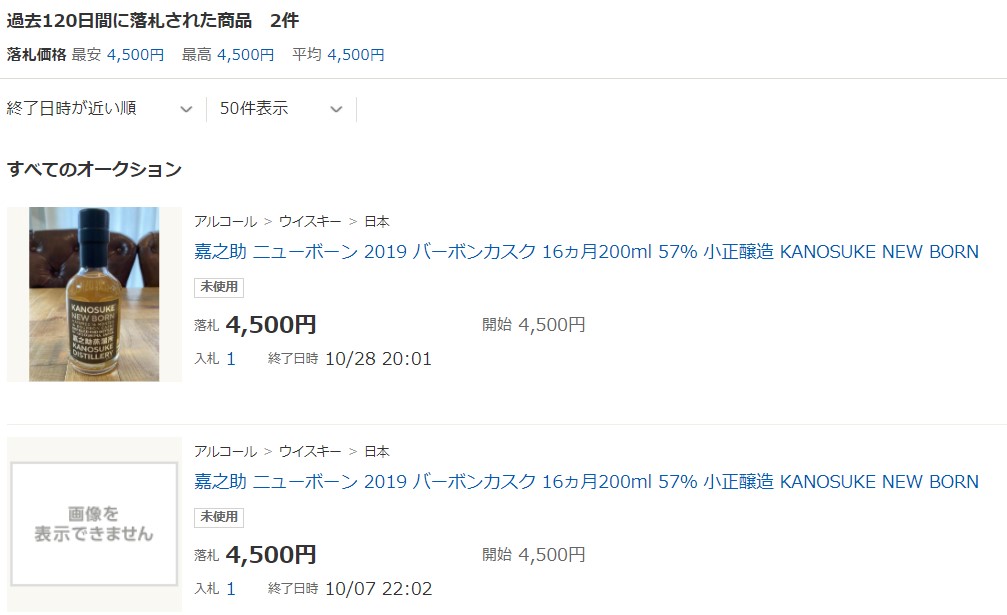 Bottled at cask strength after 16 months of storage. It has evolved further from the previous Newborn, becoming mellow and soft.
The aroma changes from vaguely tidal to sweet. The palate has a soothing spiciness and a bitter, soft sweetness that lingers on the palate, not unlike a 16-month-old. The sweetness of the vanilla comes out more clearly and mellows out when water is added.

The current release of the Newborn series is in 200ml bottles, but a full bottle aged for 3 years is scheduled to be released in the spring of 2021.

Please be sure to check out the other articles about Kanosuke Newborn.

[Review] Kanosuke Newborn 2020 Peated
Distilled using peated malt from England. Stored in white oak barrels, this is the third version of the Kanosuke Newborn. This single malt Newborn is casked from whiskey stock d...
[Review] KANOSUKE NEW BORN 2018
Komasa Jozo was founded in 1881, and is a very old shochu maker. Its representative brand is the barrel-aged rice shochu "Mellow Kozuru" . Although the company is a sh...