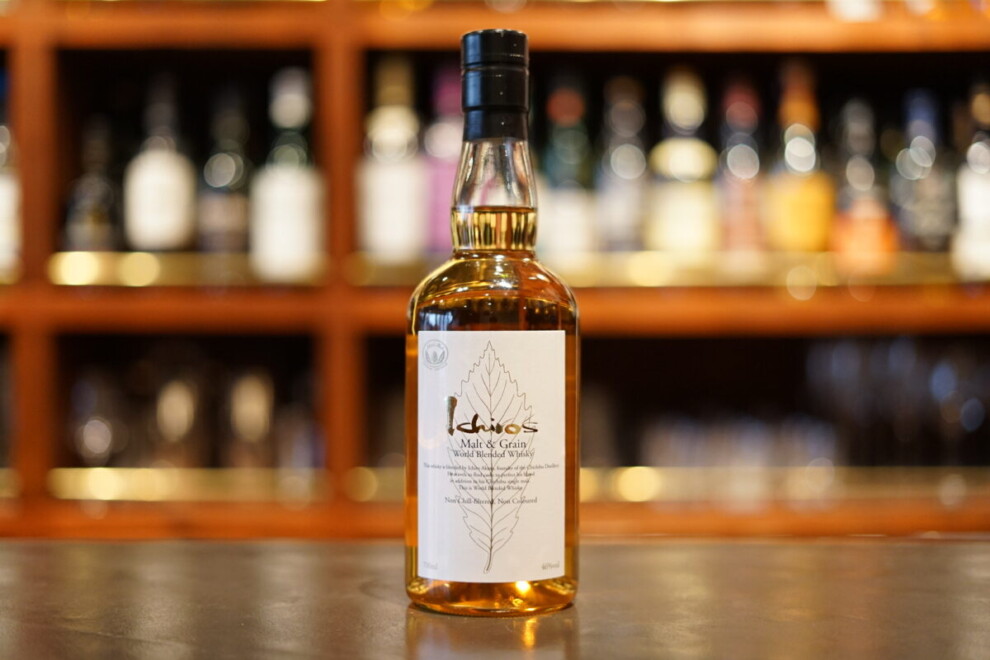 Ichiro’s Malt is popular not only in Japan but also in the world, having won the world’s number one prize at the WWA (World Whisky Awards).
Ichiro’s Malt, which is as popular among whiskey fans as the two major brands of Suntory and Nikka, is a popular and difficult to obtain whiskey that sells out the moment it appears in stores. The Leaf Series (Quercus Reserve, Wynwood Reserve, and Double Distilleries) are immensely popular and have captivated whisky fans, but this time I would like to review the White Label, the mainstay of the Venture whisky line, which is probably the most drunk of all the whiskies released by Ichiro’s Malt. Chichibu Distillery, which started production in 2008, matures its whiskey in a traditional dunnage-style storage facility*1. From among them, we have selected as the key malt an original whiskey that shows its power in blending, and blended it with a well-balanced blend of unique malts and grains aged in Chichibu.
The mellow sourness of the ripe plums and the sweetness that surrounds it is like light cotton candy, and the pleasant barrel aroma of the matured grain wine lingers in the mouth forever. This product has been bottled with non-chill filtered*2 and natural color in order to enjoy the character of the original. We hope you will enjoy the complex flavors that were created through the dialogue with the original sake. (Reference: from the label on the back of the bottle)

1Dunnage style is a method of storing whiskey barrels where they are left.
There are two ways to store barrels: dunnage style and racking style. The dunnage style is the traditional way of storing whiskey barrels, where the barrels are never placed in more than four layers.
The rack method, as the name implies, is a more efficient way of storing barrels, where the barrels are framed and stacked up to 12 high.
The main difference between the two storage methods is the temperature difference created by the height of the stored barrels, with the racking method being closer to the roof and evaporating faster.
*1  Another big difference is that most of the dunnage styles are placed directly on the ground, and the moisture from that also affects the whiskey barrels.
In contrast, many of the racking styles have concrete floors, so the humidity does not change significantly.
*2  Non-chill filter: When the temperature of the whiskey matured in the barrel becomes low, the dissolved flavor components precipitate*3 out and become cloudy. In order to prevent this from happening, whisky is usually filtered after being cooled down to about 0 to 5 degrees Celsius. The ingredients that precipitate when cooled are either malt-derived or barrel-derived, both of which are considered to be flavor components of whiskey. The fact that the whiskey is not cooled and filtered means that it is bottled with the flavor components of the malt and barrels intact, resulting in a whiskey with a more complex and richer taste.

*3 Precipitation: The separation of crystals or individual components from a liquid substance. Since it is now easy to buy at a fixed price at liquor stores and online stores, it seems to be traded at almost the same price on Mercari. It tastes good, is good with soda, and is good in terms of cost. Since it has become easier to obtain in recent years, it is a must drink for whiskey beginners.
From Suntory to Toa Shuzo, Sasanogawa Shuzo, and the 2,000 bars where Ichiro Akuto is said to have frequented, it is deeply moving to think that each of these connections has led to today’s Ichiro’s Malt.
Ichiro’s Malt is also starting to come out with a year number, and I’m sure it will continue to lead the way as a pioneer of craft distilleries in Japan.
The Chichibu distillery is now aiming to make whiskey that is unique to Chichibu, including products made from barley grown locally in Chichibu and considering the production of barrels using Chichibu materials.
Mr. Ichiro Akuto’s dream is to bring out whiskey that has been matured for 30 or 50 years. His dreamy words only make our expectations for the future swell.

■ Please check out the other articles about “Ichiro’s Malt” .