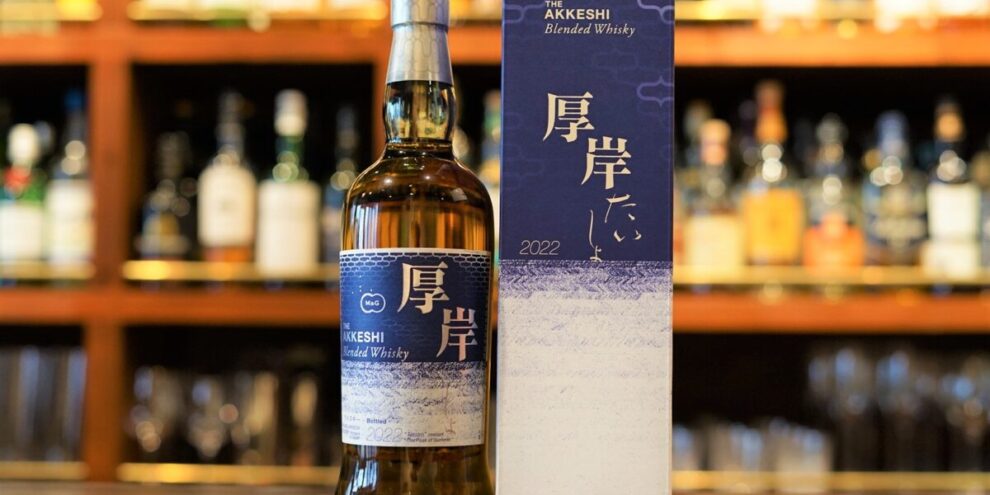 Akkeshi Blended Whisky Taisho, the eighth in the Akkeshi Whisky “Twenty-Four Season Series,” has been released. Finally, one third of the release has been completed.

It has been three months since the last single malt whisky Seimei was released.

This Twenty-Four Season series will be released alternately as single malt and blended, and this time it will be released as blended.
The 24 Seasonal Seasons are the seasons of the year divided into 24 equal parts and given names, such as “Risshun” and “Geshi” which we often hear about.

The “Great Summer Heat” is the 12th day of the 24 solar terms, and the period from the summer solstice to Risshaku

around August 8, which is the hottest season in the year. During this period, many festivals and fireworks displays are held in various regions, and many summer events are held in the area.

The label design is indigo blue, which is reminiscent of yukata (summer kimono).

October: First release of the 24 Season series.
2021: Construction of a new barley milling building (operation to begin in 2022)

Deep fog with tidal air, clear air, and abundant peat. Believing that the climate of Akkeshi in Hokkaido will create the unknown Japanese whiskey flavor we seek, we started distilling in 2016.
As in the whiskey making process on the island of Islay, water that has passed through the peat layer is used as the brewing water, and the whiskey is matured daily in Akkeshi, a cool, humid, and sea-breezy place.
The area around Akkeshi is rich in deposits of peat, which is essential for flavoring whisky, and the varied topography of the sea, mountains, and marshes allows for different flavors to be expected at each location where the peat is collected.

With a strong desire to “make whiskey like Islay malt using traditional Scottish methods,” equipment was installed by Forsyth’s of Scotland. All construction was carried out by Forsyth’s craftsmen visiting Japan. The pot stills are straight-headed and onion-shaped, similar to those at some distilleries on Islay. Heating is by radiator system, the attached condenser is a shell-and-tube type, and the mash tun is a semi-reuter type.
The fermentation tank (washback) is stainless steel, and the temperature is purposely not adjustable. The craftsman determines the timing of fermentation while letting nature take its course.

In addition to bourbon and sherry, we use hard-to-find ” Mizunara ” oak barrels for aging. In addition, we are challenging every possibility, such as matching with wine and rum casks.
In addition, barley, the raw material for whiskey, is grown in Akkeshi, and everything, including peat and wooden casks for aging, is produced in Akkeshi, aiming for “Akkeshi All-Star” whiskey production in the future. In August 2021, a new initiative has been started to experimentally distill the original whiskey distilled at the Akkeshi distillery. Maturing in Furano The new initiative is to test distill the original whiskey distilled at the Akkeshi distillery. What kind of changes will be brought about by the sake matured in Furano? This is exactly what terroir is all about, taking advantage of the great individuality of not only the local Akkeshi distillery, but also of “Hokkaido. The idea of “terroir”, which wine connoisseurs have probably heard a lot about, is incorporated into whiskey, and the fusion of “the individuality of Akkeshi” and “the individuality of Hokkaido” and the whiskey production that makes use of the terroir of these lands is fascinating and the expectations are infinite.

Lake Akkeshi and Bessanbeef Marsh in the vicinity of Akkeshi Town are registered wetlands under the Ramsar Convention. The Ramsar Convention on Wetlands, adopted in Ramsar, Iran, on February 2, 1971, aims to conserve and make wise use of wetlands as habitats for waterfowl and other wildlife under international cooperation.
We, too, aim to be a distillery that protects and coexists with this rich natural environment.
The tap water used for whiskey is taken from the Homakai River upstream of the Ohoro River, which runs near the distillery. The surrounding area is a marshland and a habitat for baikamo ducks, which are said to live only in clear water. The small white flowers that bloom in summer are a symbol of the abundant water. This water nurtures the whisky of Akkeshi. 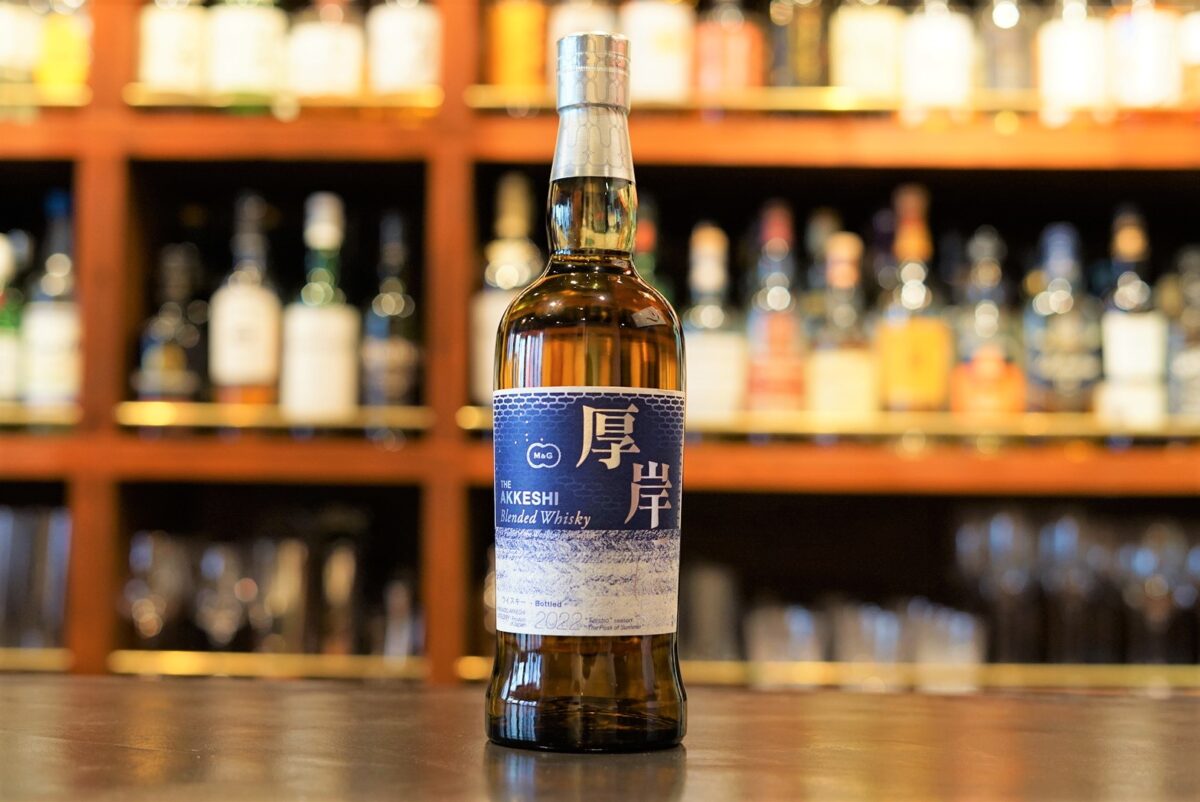 The key malt is “all Hokkaido’s original Mizunara oak barrels.

The key malt is all Mizunara oak from Hokkaido.
The flavor has a clear and distinct profile. The malts and grains of Akkeshi Malt and Grain are well harmonized and well put together.

The slightly smoky peat is like incense. It is characterized by a slightly strong and dry taste. With peat and sweetness, which are the characteristics of Akkeshi whiskey, as the core, citrus acidity such as grapefruit and orange, sweetness of honey and chocolate, and cookie-like savory taste continue, and then turn into spicy aftertaste such as white pepper. 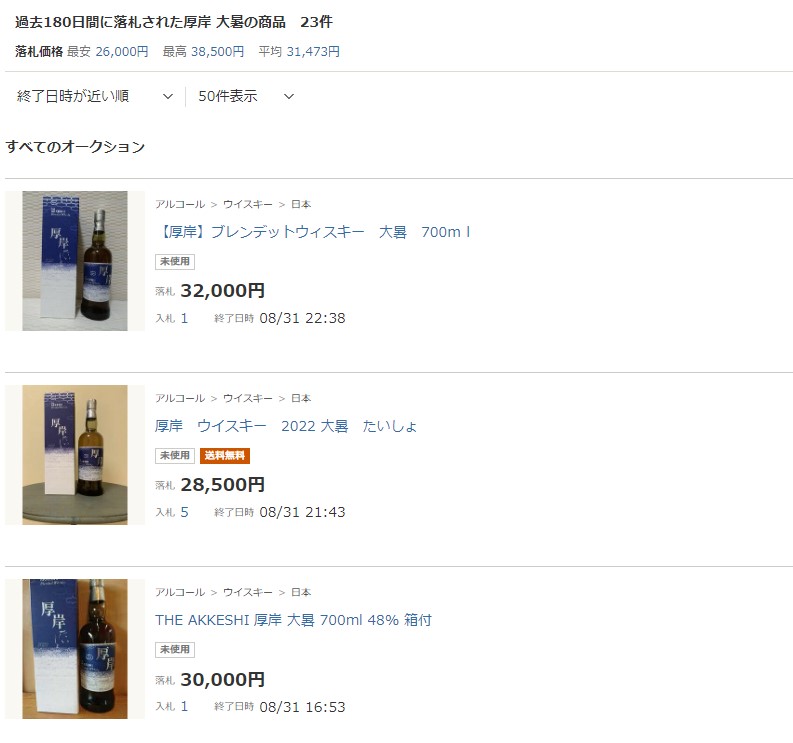 The blends released so far have been “Rain Water”, “Dosetsu”, and “Daichan”.

The “Dosetsu” was awarded the world’s highest prize in the blended category at the “World Whisky Awards (WWA) 2022” and was a unique whisky reminiscent of a single malt.

This time, “Great Heat” has a more pronounced impression of quercus, with a lactic acidic richness, fruit acidity, bitter sweetness, and a lingering peaty finish.

If you want to know more about the Akkeshi Distillery, please check out BS Fuji’s Whiskipedia in December 2020, which had a special feature on the distillery.
The program is not only about the appeal of Akkeshi whisky, but also about the nature of Akkeshi-cho, the fishing industry centering on oyster fishing, and the marriage of whisky and oysters from Akkeshi.