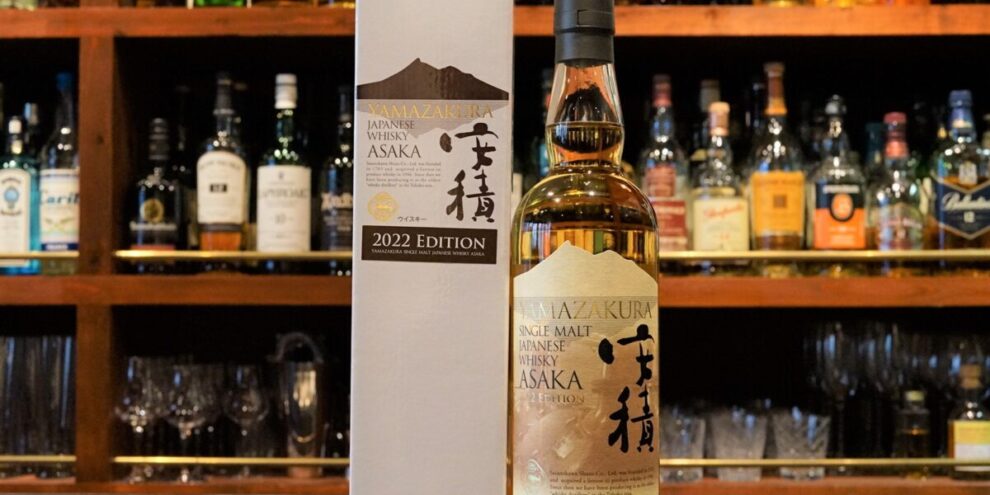 Sasanogawa Brewery, with a history of over 250 years as a sake brewery, obtained a license to produce whisky in 1946 and established the Asaka Distillery in 2016 as a 250th anniversary project.

The distillery has been gaining recognition both in Japan and abroad, with Yamazakura Blended Malt Japanese Whisky Asaka Sherry Wood Reserve winning the world’s highest award in the Blended Malt Whisky category at the World Whisky Awards (WWA) 2022 held this year.

Yamazakura Brewery, founded in 1710 south of Lake Inawashiro, moved to Koriyama in 1765.
This Yamazakura Brewery was the first to obtain a license to brew whisky in 1946, when the demand for whisky increased as a national policy during the postwar American military occupation.
The shortage of rice during and after the war made sake brewing extremely difficult, and the influx of Western culture after the war was also a factor in the company’s commitment to whisky making.
In the 1950s and 1960s, during the period of high economic growth, the company was known as “Cherry of the North, Toa of the East, and Mars of the West,” and along with Toa Brewery and Hombo Brewery, Sasanokawa Brewery’s “Cherry Whisky” became very popular.
However, as Toa was forced to withdraw from the business in 2003 due to low growth and changing tastes, Sasanokawa took care of the barrels of original whisky at the distillery in Hanyu.
This was a big help in releasing Ichiro’s Malt, which later became popular worldwide.
Since the postwar period, the distillery has continued to produce whisky in small quantities, and currently uses two types: a Scotch type and a malt type imported from Kentucky.

The Asaka distillery is located in the “Sasanokawa Sake Brewery,” a sake brewery that has been in operation since the Edo period, and began operations at the end of October 2016 with production facilities and the cooperation of Chichibu distillery Ichiro Hido. Accented with 50ppm peated base liquor

This is a blend of carefully selected 1st fill bourbon barrel non-peated and 50ppm peated. It is gentle, mellow, and rich, with a light citrus acidity unique to Asaka and a refreshing lemongrass-like aroma with a hint of peat. Nuts, savory canele, and vanilla can be detected, and the barrel-derived sweetness and malt flavor are well balanced with a light body. 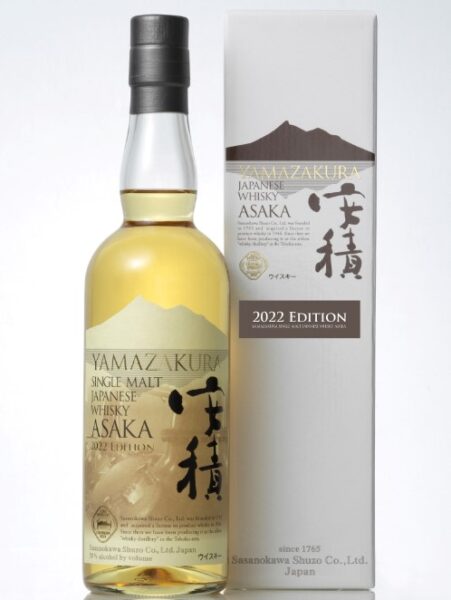 Not too sweet, with almost no peat taste, and a refreshing taste that is perfect for this hot season.

The official product description says, “The subtle accentuated peated Asaka peat aroma is pleasant”, but I didn’t feel it, or rather, I didn’t feel the peat at all, to the point where I thought it was non-peated. I only drank it straight, so perhaps the peat would come out if I drank it on the rocks or with soda.

It has a taste that is not close to any of the recent Japanese whiskies, but there are no negative elements, and my impression is that this is a delicious whisky.

We are looking forward to the next release to see what kind of whisky the Sasanogawa Brewery, which is well versed in sake brewing, will be aiming for in the future.

Please be sure to check out our other articles on Asaka Distillery.