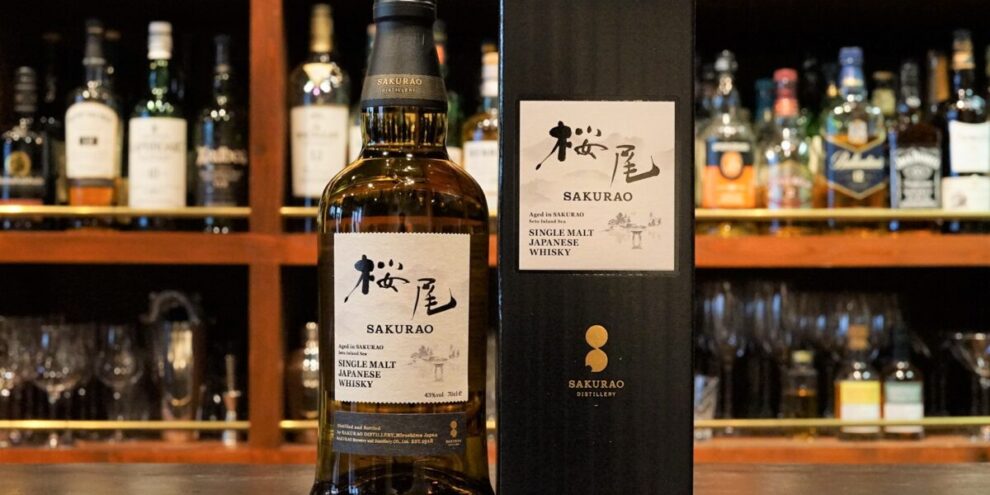 Ltd. (SAKURAO B&D) (formerly known as Chugoku Brewery Co., Ltd.), famous for its SAKURAO GIN, launched a project in 2015 to build a new distillery as a 100th anniversary project.

SAKURAO DISTILLERY was born in Hatsukaichi City, Hiroshima Prefecture, known as the town of Itsukushima Shrine, a World Heritage Site, and began operation in January 2018.

About a year later, the single malt was released in a watered-down version with an alcohol content of 43%.

Although the limited number is not certain, it is likely to be shipped to restaurants, hotels, bars, and other commercial outlets, as well as to a reasonable number of retail outlets for general consumers.

Sakurao Brewery and Distillery Co. in Hiroshima Prefecture is a long-established brewery established in 1918.
In fact, it has a deep history of whisky making, and was engaged in the production and sale of malt whisky from 1938 to 1989. At that time, the distilled spirit was stored in a warehouse in Togouchi that utilized a JR West Japan railroad exploratory tunnel.
In 2008, the company began selling Togouchi Whisky, a blend of the original whisky stored in the Togouchi storage facility and imported original whisky. (90% of the product is exported to Europe.)

In December 2017, as a 100th anniversary project, new equipment was installed to produce high quality single malt whisky and a craft distillery “SAKURAO DISTILLERY” from Hiroshima was constructed. distillation started in January 2018. The distillate is aged for more than 3 years at the Sakurao distillery.
The distillery is located on the ocean side, and the barrels have a subtle aroma of the Seto Inland Sea. The environment has a large difference in temperature throughout the year, so the aging process proceeds quickly.

It has a long-lasting woody aroma and a subtle peaty flavor. The taste is complex and deep, with a rich sweetness and a slight bitterness. The product does not appear to be currently available on any of these retail sites. (*As of 6/17/2022)

Compared to the cask strength version released last year, the flavor seems much milder. The taste is easy to drink and favorable for whisky beginners.

The Sakurao aging cellar is located by the sea. This whisky has an impressive salty taste reminiscent of the sea. This Sakurao distillery has already started producing grain whisky, and in a few years, a three-year aged grain whisky will be ready. The distillery is also increasing its production of malt whisky, and seems to be producing a variety of malt whisky. I think they are one of the top class distilleries in terms of production volume among domestic craft distilleries.

I have high expectations for their future releases.

■Please check out the other articles on Sakurao Distillery.

【Review】Single Malt Japanese Whisky Sakurao SHERRY...
A single malt blended from the best SHERRY CASK selected by Stillman, who has tasted numerous bottles of the original.