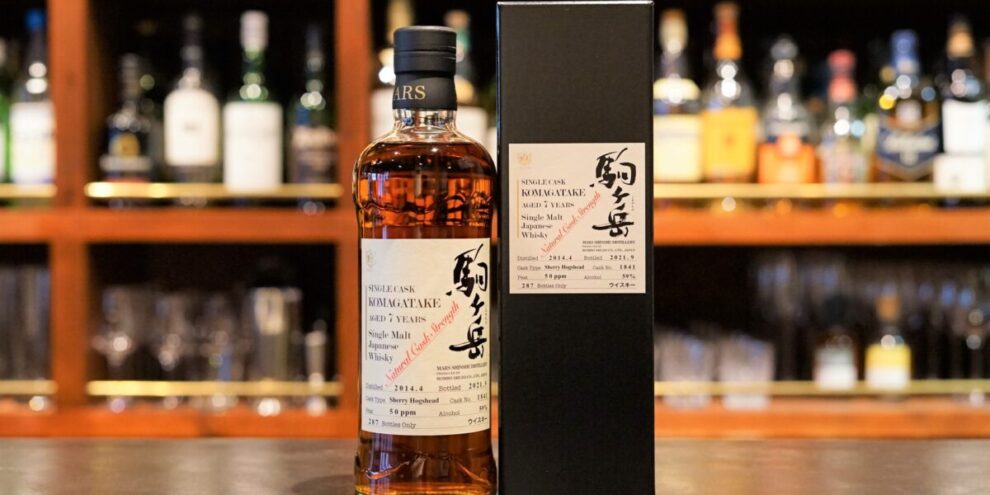 The Single Cask Komagatake is sold in very limited quantities. The “Single Cask Komagatake 2014 No. 1841 AGED 7 YEARS” presented in this article is a single cask whisky, distilled in April 2014 at the Mars Shinshu distillery, aged for more than 7 years in sherry hogsheads with a heavy peated original.Limited edition of 287 pieces.

The Hombo Brewery, which had been striving to make shochu, a Japanese distilled spirit, in Kagoshima, obtained a license to produce whiskey in 1949. Since then, the company has held on to the dream of “someday making real whiskey that takes full advantage of the Japanese climate.
After several years of whisky production in Kagoshima, in 1960, he established a factory for wine and whisky production , Mars Yamanashi Winery, in Yamanashi. Then, in order to engage in full-scale whiskey production, he searched for an even more ideal location.

The natural conditions for whiskey making are very demanding: cold climate with clean air, moderate humidity, and good quality water.
In 1985, after searching for a site that met these conditions, Mars Shinshu Distillery was established at an altitude of 798 meters at the foot of Komagatake Mountain in the Central Alps, Nagano Prefecture, in search of the best environment for whisky making.
In 1992, distillation was suspended due to a slump in demand for whiskey. Later, as Japanese whiskey began to be appreciated worldwide, we decided to resume distilling in 2009, when the demand for whiskey was on the recovery trend, and started distilling again in 2010. The company re-started in February 2011.
In September 2020, the building was completely renovated for the first time in 35 years. Investment is approximately 1.2 billion yen.
Starting in May 2019, a new whiskey distillation building (including a barrel cellar) will be built to renovate aging facilities and improve the barrel cellar facilities in anticipation of increased whiskey production and to provide tours of the whiskey making process, and a new visitor building will be built to sell original whiskey and goods, and existing facilities and equipment will be renovated.
The new whiskey distillation building has a total floor area of 1,996m2 (including the barrel cellar, which will hold approximately 2,500 barrels), and the visitor’s building has a floor area of 746m2.
Reference: Hombo Brewery official website 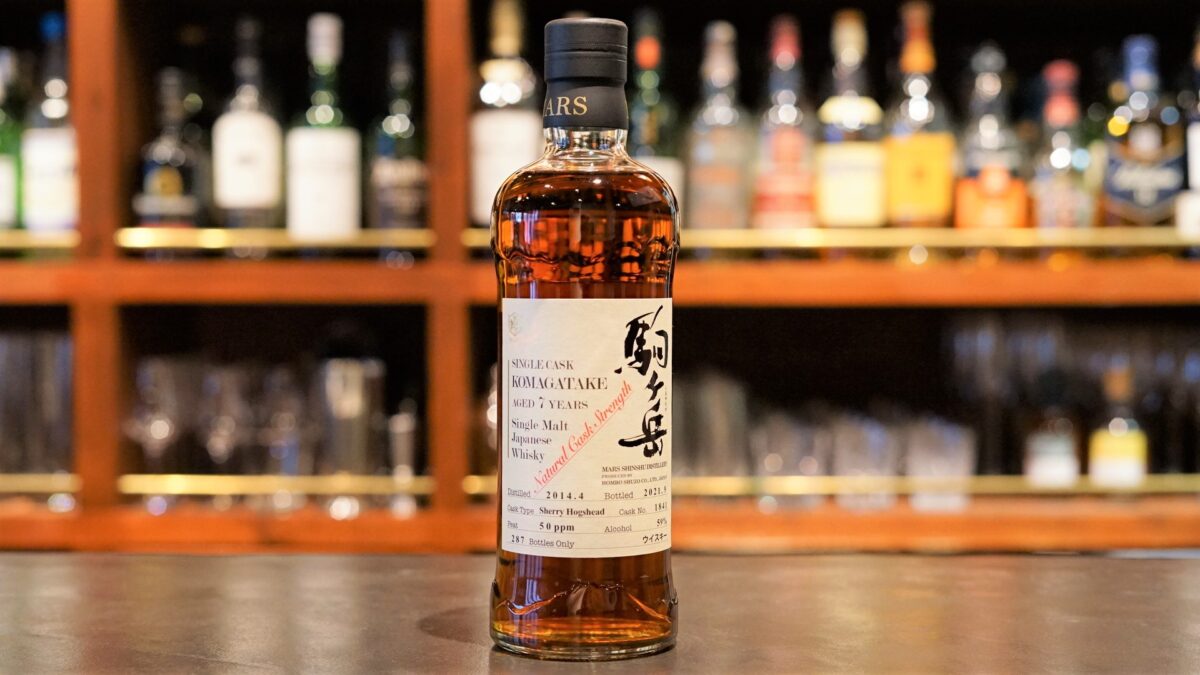 Miyata Village, Kamiina-gun, Nagano Prefecture, is located at the foot of Komagatake, in the Japanese Alps mountain range. The Mars Shinshu Distillery is located in a quiet forest at an altitude of 798m, surrounded by good quality water and rich nature.
Single Cask Komagatake 2014 No.1841 AGED 7 YEARS” is a rare and unique single cask bottled from the malt whisky matured in the cool environment of Shinshu, selected from one barrel of heavily peated (50ppm) sherry hogshead aged for more than 7 years. It is a single cask whiskey gem.
Reference: Japanese Whisky｜Single Cask Komagatake 2014 No.1841 AGED 7 YEARS

Currently no items appear to be listed on Yahoo! Auctions (*as of April 8, 2022)

Currently not available on any mail order sites (*as of April 8, 2022)

It is characterized by an elegant sweetness. While the sherry cask characteristics are quite colorful, you can certainly taste the malt flavor, the sense of maturity, and the 59° alcohol.

Both the aroma and taste are sweet at first. After that, malt and fruit flavors appear.

When a small amount of water is added, the sweetness of the aroma and taste is even stronger, while the alcohol taste fades and the beer becomes gentler to drink.

We recommend drinking it straight or toasting it up. We hope you will enjoy the rich sweetness and alcohol taste straight up, and then gradually add more water to enjoy the changes.

Single Cask Komagatake” is currently sold on a regular basis. However, since it is limited to a very small number of bottles, it seems to be quite difficult to obtain. If you have a chance to drink it, I would like to compare them.

■Please take a look at other articles about “Hombo Shuzo, Single Malt Komagatake”.