Statistics on export value of whisky (2021)

The value of liquor exports in 2021 will beApprox. 114.7 billion yen (161.4% compared to the previous year) up, reaching a record high for the 10th consecutive year.

Whisky export volume: 136.0% of the previous year’s level. It is the category with the largest “discrepancy between volume and value” among all alcoholic beverages, meaning that higher-priced products tend to be exported in greater quantities each year. 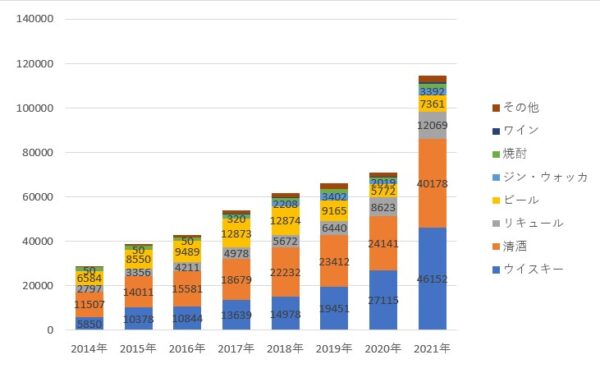 The momentum of whiskey exports has continued unabated, and even on a single month basis, exports have exceeded those of the same month of the previous year for 19 consecutive months since June 2020.

While the top four countries did not change in ranking, all of the top 10 countries experienced significant increases over the previous year.

Since the beginning of 2021, the situation of “boycott of Japanese products” which had continued until last year, has changed in South Korea, to the extent that “anti-Japanese fatigue” has become a keyword within the country. Imports of Japanese beer and other products changed to a recovery trend. As a result, the anti-Japanese boycott movement is easily heated and cooled Temporary Trends The view has changed to one that it was a radical boycott and that it is considered risky to conduct business activities in South Korea due to the extreme boycott.

All of the top 10 whisky exporting countries saw year-on-year increases.

The reason for the popularity of Japanese whisky in China is that the Japanese “tradition of craftsmanship” and “dedication with the spirit of a master craftsman” are highly valued, and its “delicate and clean” characteristics compared to Scotch match those of the Chinese.

Another reason is the soaring resale price of Japanese whisky in China, which is also a factor in the reduction of whisky import tariffs from 10% to 5% in 2017.

On February 16, 2021, the definition of Japanese whisky was finally established as a voluntary standard by the Japan Western Liquor Brewers Association.

This is a sign that Japanese whisky is ready for further development, protecting its value and reliability in the future.

Collaboration whiskys from Chichibu Distillery and Mars Shinshu Distillery through the exchange of original sake, as well as the second to fifth releases in the Nijushisekki series from Akkeshi.

It seems certain that the explosive popularity of Japanese whiskey in Japan and abroad is behind the increase in the number of distilleries year after year, such as the following.