The official website of Hombo Shuzo has released information on the release of “Single Malt Tsunuki 2022 Edition” (limited to 35,800 bottles).
The release date is January 18, 2022.

In 2022, the distillery will celebrate its 6th season. This is the third release under the name of “Single Malt Tsunuki”. I am looking forward to seeing how it evolves from the first release “Tsunuki THE FIRST” and the second release ” Tsunuki Peated “.

At this time, only product information is available, no information on lottery sales has been uploaded.

Single Malt Tsunuki 2022 Edition is a single malt whisky released in 2022 that was distilled between 2017 and 2018 and vatted with malt liquor matured in bourbon barrels.

I’m sure it will be uploaded in the future.

Tsunuki is located in Kaseda, Minami-Satsuma City. Nestled in the mountains full of greenery in the southwestern part of the Satsuma Peninsula. Mars Tsunuki Distillery, the southernmost whiskey distillery on the mainland The release date is January 2022.

Located in the southwestern part of the Satsuma Peninsula, Tsunuki is in a long basin along the Kaseda River, a tributary of the Manose River. Surrounded by the mountains of Mt. Kurata (475m) to the east and Mt. Nagaya (513m) to the west, the topography of the area is basin-like, so the summers are hot and the winters are cold, which is extremely harsh in southern Satsuma.
The area has a natural environment that is a “blessing” with good water resources (Mt. Kurata spring water), and the cultivation of oranges, known as “Tsunuki oranges,” is flourishing by making effective use of the mountain slopes.
Tsunuki, blessed with a mild climate and good water resources, is the birthplace of the Hombo Sake Brewery. It has been more than a hundred years since the brewery began making shochu using Satsuma sweet potatoes, one of Satsuma’s most famous specialties.
Reference: Mars Tsunuki Distillery official website

4. The lineup of Single Malt Tsunuki 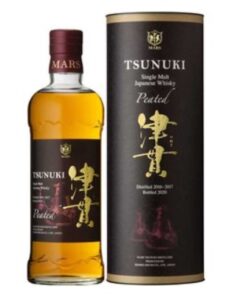 Single Malt Tsunuki Peated is the second single malt whisky from Mars Tsunuki Distillery.
This whisky is made by vatting mainly peated malt raw materials matured in bourbon barrels. It has a pleasantly sweet and soft aroma, followed by a smoky flavor derived from the peat that spreads in the mouth, giving the bottle a lingering taste that is typical of distilleries in the southernmost part of the mainland. 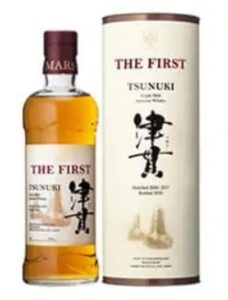 “Single Malt TSUNUKI THE FIRST” is the first single malt whisky to bear the name “Tsunuki“. Taking advantage of the climate of Tsunuki, Kagoshima, it is characterized by rich and heavy liquor even with a short maturation period.

While the climate is warm, the basin topography allows for a sharp difference in temperature, resulting in vigorous maturation. The presence of the heavy malt is unique to the warm climate and the temperature difference between the two.

Also, by adding a small amount of second-fill bourbon barrels as key malt, the barley flavor, richness of the mouthfeel, and lingering aftertaste derived from the original sake are added. This expresses the energy and depth of the deep original liquor that the Tsunuki distillery aims to produce.