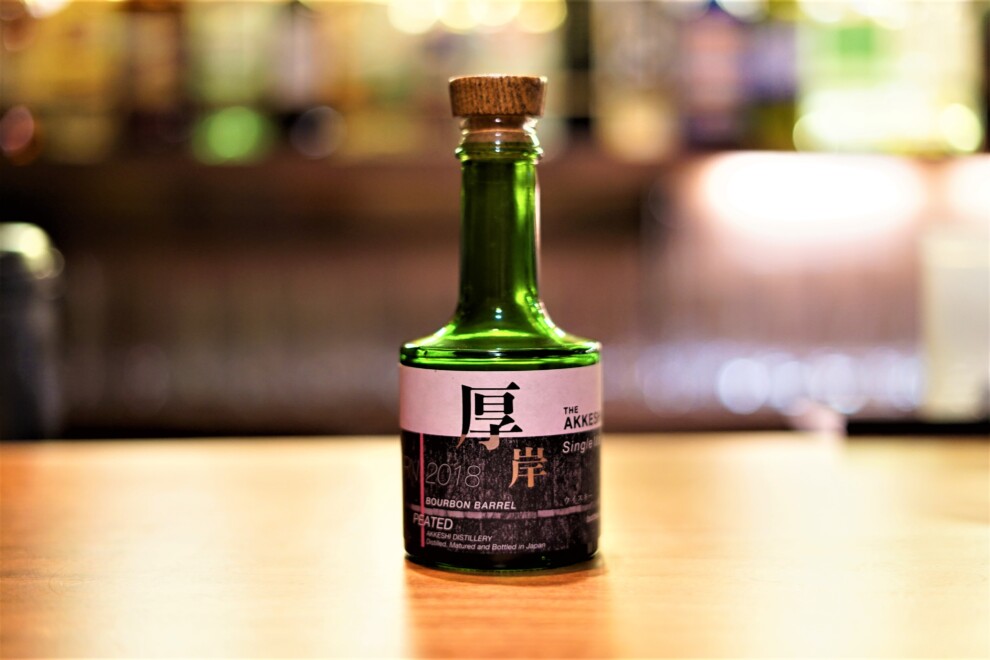 The AKKESHI Distillery is highly regarded worldwide, and is becoming more and more famous every day.
This time, I would like to introduce “AKKESHI NEW BORN FOUNDATIONS 2” which was released last August.

Prior to the upcoming official commercialization, the NEW BORN series, which will tell whisky lovers about the “present state of the AKKESHI Distillery,” is scheduled to have a total of four installments, and the first and second installments have already been released in 2018.
The third and fourth series will be released this year, 2019.

The second product introduced this time is “Peated”, which will become the house style of the AKKESHI Distillery in the future.

Deep fog with tidal air, clean air, and abundant peat. We began distilling in 2016, believing that the climate of AKKESHI, Hokkaido, would create the unknown flavors of Japanese whisky that we were seeking.
Just like the whisky making process on the island of Islay, we use water that passes through a layer of peat for the brewing water, and the whisky is matured day by day in the cool, humid, and sea breezes of AKKESHI.
The area around AKKESHI is rich in peat, which is essential for flavoring whisky, and the varied topography of the sea, mountains, and marshland means that different flavors can be expected from each location where the peat is collected.

“With a strong desire to produce whisky like Islay malt using traditional Scottish methods, we installed equipment made by Forsythe in Scotland. Forsythe’s craftsmen came to Japan to carry out all the work.
The shape of the pot still is a straight-headed onion shape, similar to that of some distilleries in Islay.
Heating is by a radiator system, the attached condenser is a shell and tube type and the mash tun is a semi-loiter type.
The fermentation tank (washback) is stainless steel, and we dare not adjust the temperature. Letting nature take its course, the craftsman determines the timing of fermentation.

In addition to the two dunnage-type aging rooms, an innovative rack-type aging room was completed in February 2018. The aging room is located right next to the AKKESHI Bay. The aroma of the sea wafting through the air is expected to have a positive impact on the characteristics of the whisky.
In addition to bourbon and sherry, difficult-to-obtain “mizunara” oak is used for maturing barrels. Furthermore, we are challenging all possibilities such as matching with wine and rum barrels.

Lake AKKESHI and Bessanbeigi Marsh are registered wetlands under the Ramsar Convention. The Ramsar Convention is a treaty on wetlands adopted in Ramsar, Iran on February 2, 1971, which aims to conserve and wisely use wetlands as habitats for waterfowl and other wildlife under international cooperation.
We aim to be a distillery that protects and coexists with this rich nature.
The intake for the drinking water used for whisky is the Homakai River upstream of the Ohoro River, which runs near the distillery. The area around the distillery is a marshland and a habitat for the baikamo, which is said to live only in clear streams. The small white flowers that bloom in the summer season are a symbol of the rich water. This water nurtures the whisky of AKKESHI.

See also this ↓ for more information on the AKKESHI Distillery. 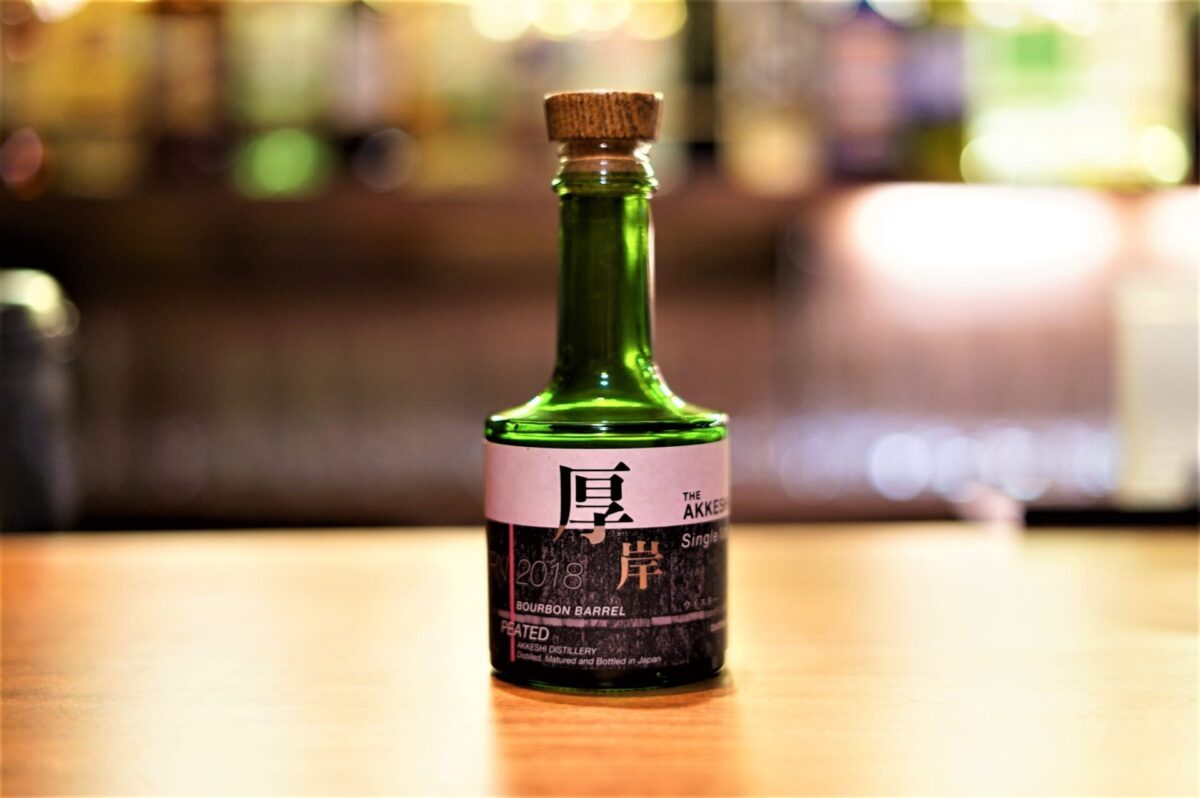 Bathed only in peated malt barrels aged for 8 to 17 months in bourbon barrels.

Peated malt (phenolic value: 50ppm), batting only the peated malt that is close to cask strength and bottled at 58% alcohol by volume. 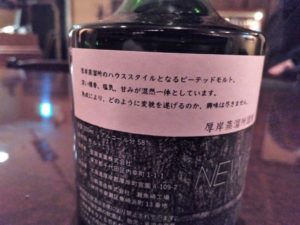 President Hida once told a media interviewer that he was so impressed by Ardbeg 17 years that he decided to make whisky.
In other words, the AKKESHI Distillery is aiming for a smoky peated malt, like the Islay malts of Scotland. Smoky peated malt is made by burning peat as a heat source during the malting stage of the whisky making process.
This peat can not be found everywhere, but it is often found in “bogs with low temperatures” such as Scotland, and in fact, Hokkaido’s AKKESHI is said to have a similar climate, which makes it a good source of peat.

Now, I’ve actually tasted this AKKESHI NEW BORN FOUNDATIONS 2, and here’s what I think.
In the aroma, you can feel the youthfulness of the Newborn maturation, but the high quality comes through the moment you put it on your tongue. It is clear in a good way with no miscellaneous flavors, and you can feel the solid smoke of the hebony peat.
If you let it sit for a while, the aroma will gradually open up. I think there is no other Newborn with such a deep flavor. 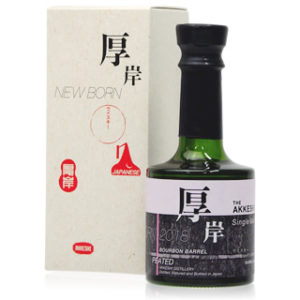 President Hida said that Akkeshi Distillery is paying the best attention to the quality of raw materials, quality control and hygiene management, and the quality of the original brew is improving day by day.
He also mentioned that in the future, they would like to use peat from Hokkaido to make a house style peated malt whisky.
The Akkeshi Distillery’s Newborn Series, which offers a variety of flavors in different casks, is a dream come true for whisky lovers, and expectations are high for the future.
The third and fourth releases of the New Born series are scheduled to follow, so let’s continue to enjoy them!

Please check out the other articles about the Akkeshi Distillery.