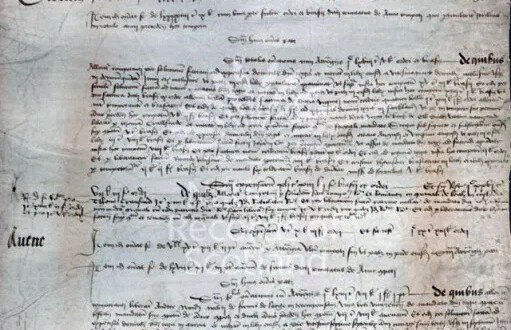 Here, we will compile the history of the birth of whisky, which is based on a vast amount of data and various theories, and compare it with Japan at that time.

1-1. Birth and Etymology of Whisky

The word “Whisky” is said to have its origin in the Gaelic word Uisge Beatha, which was first used in 1172 when King Henry II of England invaded Ireland and his soldiers reported on the Irish distilled spirit “usqueboe” .
It is recorded that the English troops occupying Ireland in the 12th century heard the word as Uishgi, which later became Usquebaugh, which then changed to Usque and Whisky.

The oldest surviving record is the 1494 Royal Treasure Book of the Scottish Royal Family on the veal-skin scroll, saying, “At the behest of the king, we give 8 bols of malt to the monk John Coe and build aquavité (latin water of life).The noun “Whisky” was first written in an English dictionary compiled by Dr. Samuel Johnson in 1755.
In the English dictionary, it is said that it was “distillate that comes out with fragrance”, and at that time it seems that it was a so-called imitation whiskey that was thought to have been seasoned with flavoring etc. in a new pot without aging.

1-2. Whisky that began with dense construction

It is said that the age was carried out from when it was aged from 1644 to 1823, and the technology of malt drying in Pete is also cultivated in the dense construction era that lasted for nearly 200 years.
The maturation began with a government crackdown that concealed whisky in sherry barrels.
The “whisky tax”, introduced by the Scottish Parliament in 1644, resulted in smuggling and strangely the foundations for Scotch whisky.
This led to the later development of the individual tastes and production methods of Highland and Lowland whiskies.
The Highland region is surrounded by a harsh natural environment with steep mountains and fast-flowing mountain streams, making it a perfect place to hide whisky, and it is fortuitous that the environment suitable for whisky making was coincidentally all there.
Furthermore, half of the existing distilleries in Scotland (about 100 distilleries) are located in Speyside, as a result of the fact that the Speyside region in the Highlands is particularly easy for moonshiners to hide themselves in.
On the other hand, in the Lowland area, the smuggling did not go as well as it should have, and the distilleries fell into disuse.
The reason for this was the gentle hilly terrain, and there must have been a limit to moonshining in an environment with a good view.
The pot stills were modified to produce large quantities at a time, but the quality declined and the lowland malts were not able to compete.
Gradually, the company began to decline.
However, with the advent of the café still (see below), Roland focused on grain whiskey production and began to come back to life.
Later, when Scotland was annexed by England in 1707, the whisky tax was raised further, but to no avail.
In 1713, a “malt tax” was introduced, which imposed a tax on the amount of malt in whisky, but producers tried to lower the tax by using unmalted barley, wheat, and rye as ingredients.
This is said to be the beginning of grain whiskey.
In 1823, the government finally realized that they were playing a game and introduced a “whisky production license fee,” which allowed whiskey makers to make whiskey with impunity.
Glenlivet was the first to obtain such a license.

2. Birth of the distiller

I would also like to touch on the history of distillers, which are indispensable for making whisky.

2-1. Lambiki born from pharmaceutical use

With little literature on distillers, the oldest is the Tepegaula site in Mesopotamia, where fragrance distillers were discovered 3,500 years ago BC.
Shochu production began in the Ryukyu Kingdom in the middle of the 16th century (Azuchi-Momoyama to early Edo period) when distillers were introduced to Japan, and around the 17th century, medicinal awamori was introduced to Edo and Kyoto during the Ryukyu invasion of the Satsuma domain.
After that, a Rambik distiller made in Southeast Asia landed, and the distiller “Lambiki” was completed referring to this Aranbic.
Write “蘭引き” in Kanji.
It was named because Aranbic changed and lanan scholars used it for medicine.
There are many ceramics, but copper ones have also been found.

2-2. The prototype of the current pot still

The original pot still we see today was a tabletop distiller, but various types of stills were created and improved, including bell, pelican, twin, triple-closed, turtle, and horn stills.
Until the early 16th century, glass and metal distillers were popular, but they were expensive and easily damaged.
Distillers made of ceramics were inexpensive and easy to manufacture, and they were used with a glaze inside to increase thermal efficiency.
Metal distillers used brass, white-eye, bronze, copper, and even toxic lead for durability and convenience.
As the price of copper dropped and became more readily available in the early 17th century, it became the preferred material for spirits due to its superior distilling qualities.

In 1826, a Scotsman, Robert Stein, succeeded in developing a continuous distiller, and an Irishman, Eneas Coffey, further improved this continuous distiller and patented it in 1831.
The name Coffey still (café still) was taken from Coffey’s name, and it is also called patent still, which means patent in English.
With the advent of the continuous distiller, mass production of whiskey became possible, and the Lowland region actively adopted this method and began to increase its production of grain whiskey.
On the other hand, the Highland region continued to use the traditional single distillation process.

Although the number is still decreasing worldwide, there are also coffeestils in operation. In 1963, Masataka Taketsuru of Nikka Whisky introduced it with the dream of creating a blended whisky that is second to none in Scotland. “Cafe Malt” and “Cafe Grain” made at Miyagikyo Distillery have attracted attention and are highly acclaimed around the world.

2-5. Whisky blend for the first time in history

After this, since the whisky until 1853 was sold as it was from the barrel when it was completed, it seems that there were variations in taste even in whisky from the same manufacturer and it became a complaint.
Wanting to sell whisky of the same quality at any time, Edinburgh merchant Andrew Usher came up with the idea of mixing glenlivet single casks and evening out the taste.
It is also the moment when the first-ever blended malt whisky was born, and it can be said that it is the founder of the blender.
Smith’s Glenlivet “Usher’s Old Vated Glenlivet” is completed, and Matthew Calbraith Perry, who left the Norfolk naval port in the UNITED States, will take home this and American Rye whiskey for Japan.

After this, until 1853, whisky was sold straight from the cask when it was finished, so even whisky from the same manufacturer tasted differently, which sometimes led to complaints.
Andrew Usher, a merchant in Edinburgh who wanted to sell whisky of the same quality at any time, came up with the idea of mixing single casks of Glenlivet whisky that he was dealing with, and succeeded in equalizing the taste.
This was the moment when the first ever blended malt whisky was born, and it can be said that he was the originator of blending.
Matthew Calbraith Perry leaves the Norfolk Military Port in the U.S. for Japan with this and other American rye whiskeys.

3. Timeline of the birth of whiskey

History of Whiskey in Japan

Chapter 7: Before and after the battle