The two new products, “Single Malt Yoichi Aromatic Yeast” and “Single Malt Miyagikyo Aromatic Yeast,” will be released in 2024. 90th Anniversary of NIKKA’s Founding The new products will be launched in 2021, and will focus on the depth of Nikka Whisky’s diverse range of whiskies and the history of the different types of whiskies created by raw materials, fermentation, and other production processes. Second product in the “NIKKA DISCOVERY Series” The new project will be launched in 2021. Developed as a series to “discover” the diversity, depth and unexpectedness of whisky.

This new product focuses on the “distinctive aroma produced by the different yeasts used in the fermentation process.” This is a limited edition product that brings out the hidden and unexpected character of “Single Malt Yoichi” and “Single Malt Miyagikyo” by adding a new aroma created by the yeast, while maintaining the unique charm of the single malt.

The product will be marketed mainly for commercial use. Overseas sales are also planned, mainly in Europe.

The label uses colors that reflect the aroma of each flavor, with a gradual color gradation to express the aromatic image of the product.

It has been almost 30 years since the first distillery was started in Yoichi, Hokkaido. Masataka Taketsuru, who believed that “whisky becomes richer and richer by blending multiple whiskies from different distilleries,” desperately needed a second distillery. Taketsuru chose Miyagikyo in Sendai. Miyagikyo Gorge in Sendai, a lush green gorge blessed with two clear streams, the Hirose River and the nikkawa River. When Taketsuru first visited this area, he drank a bottle of Black Nikka he had in the clear water of the Shinkawa River and confirmed the taste. It is said that he decided to build the distillery on the spot. The Miyagikyo Distillery is proud of its “café-type continuous distillation machine.” At the time of its introduction, this distillation machine was already considered old-fashioned. Because it is an old type, it tends to leave a lingering taste, but Taketsuru chose this old type distillation machine because it is possible to transform it into the original aroma and sweetness of the raw materials through technology. At Miyagikyo Distillery, the people who inherited Taketsuru’s passion for whisky continue to make various attempts in pursuit of the best possible whisky.

For more information about Miyagikyo Distillery, please see this article. 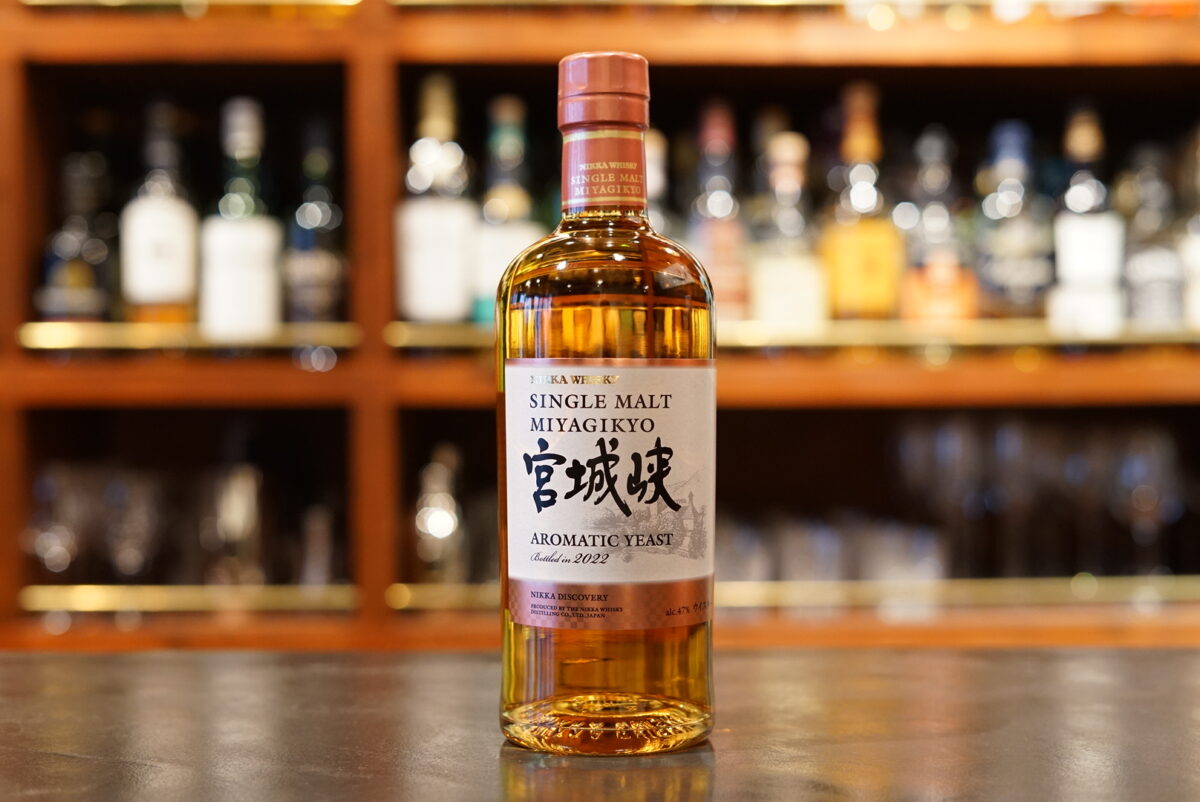 A fusion of the elegant flamboyance of Miyagikyo malt and the new aroma created by the yeast.

This single malt whisky has a subtle overlay of ripe apricot-like aroma, while utilizing the elegant opulence that is characteristic of Miyagikyo malt. The rich fruity sweetness harmonizes with the richness of the malt, and the soft malt and moderate peat provide a pleasantly balanced cask aroma that lasts.

This yeast produces a sweet and seductive aroma, like that of apricots. The original wine that makes the most of its power will show its true value after a few decades of aging.
However, this character is very sensitive, and if it exceeds a certain point, it becomes difficult to balance it with the original gorgeousness of Miyagikyo.
On the other hand, if it falls below that point, the aroma itself will disappear without a trace.
Therefore, the blender uses used barrels that have been aged for a number of years and have acquired a mild oaky character to achieve harmony.
A small amount of heavy peat was added to the blend to give a subtle peatiness to the wine.
The sweet fruity aroma rises with the gorgeousness at the top, and after the richness of the thick malt, the fruity flavor comes back again.
The strong character created by the ingenuity of the fermentation process is delicately balanced with Miyagikyo’s character and asserts itself.

Prior to the Discovery Series, the limited editions have changed their character with “different cask types used in the wood finish,” such as the 2017 Moscato Wood Finish, the 2018 Manzanilla Wood Finish, and the 2020 Apple Brandy Wood Finish.
The Discovery Series does not do finishes, and in this second release, the whisky brings out the hidden and unexpected character of single malt Miyagikyo while taking advantage of its appeal by “different yeast”. Miyagikyo itself has fruity and elegant characteristics, but both the aroma and taste are more juicy and fruity than non-vintage.

Compared to the non-vintage, the woodiness does not come out so much, but it only comes out a little after a while after pouring into a glass, but it is just right as it lasts long and jiggly.

The character of Miyagikyo and the aromatic yeast are well blended.

Please compare it with Miyagikyo Non-Vintage and taste the difference.

Nikka Whisky is planning to celebrate its 90th anniversary in 2024, and the third Discovery Series is scheduled to be released in 2023. We look forward to seeing what kind of DISCOVERY they will show us next time.

■Please check out our other articles on “Single Malt Miyagikyo.”

[Review] Single Malt Miyagikyo Peated - Characterist...
This work of the first "NIKKA DISCOVERY series" does not finish, and it is a whisky that brings out the unexpected personality hidden while taking advantage of the cha...