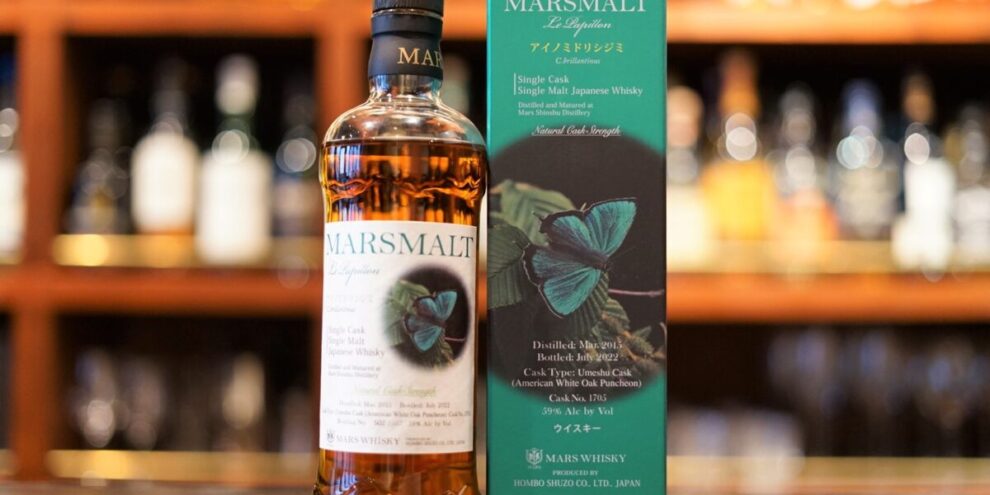 The “MARSMALT Le Papillon” series expresses the splendor of Japan’s seasonal climate and natural environment, which forms the environment in which whisky is matured, using butterflies that live in Japan as a motif.
This is the thirteenth in the series, and the theme is the “C.brillantinus”, which inhabits deciduous broadleaf forests in mountainous areas where trees of the beech family grow mainly. The image is based on the beautiful golden-green wings of the zephyrs, which are known as the “jewels of the forest”.

This single cask whisky is a gem of a single cask whisky, bottled at natural cask strength and non-chill filtered from the original malt liquor distilled in March 2015 and bottled in July 2022 at the Mars Shinshu Distillery.

The natural conditions for whisky making are very demanding: cold climate with clean air, moderate humidity, and good quality water.
In 1985, after searching for land that met these conditions, Mars Shinshu Distillery was established at an altitude of 798 meters at the foot of Komagatake Mountain in the Central Alps, Nagano Prefecture, in search of the best environment for whisky making.
In 1992, distillation was halted due to sluggish demand for whisky. Later, as Japanese whisky began to be appreciated worldwide, we decided to resume distilling in 2009, when the demand for whisky was on the recovery trend, and started distilling again in 2010. The company re-started in February 2011.
In September 2020, it was completely renovated for the first time in 35 years. The investment is approximately 1.2 billion yen.
In May 2019, a new whisky distillation building (including a barrel cellar) was built to renovate aging facilities, improve the barrel cellar facilities with a view to increasing whisky production, and provide tours of the whisky making process, as well as a visitor building to sell original whisky and merchandise.
The new whisky distillation building has a total floor area of 1,996 square meter (including the barrel cellar, which will hold approximately 2,500 barrels), and the visitor’s building has a floor area of 746 square meter. 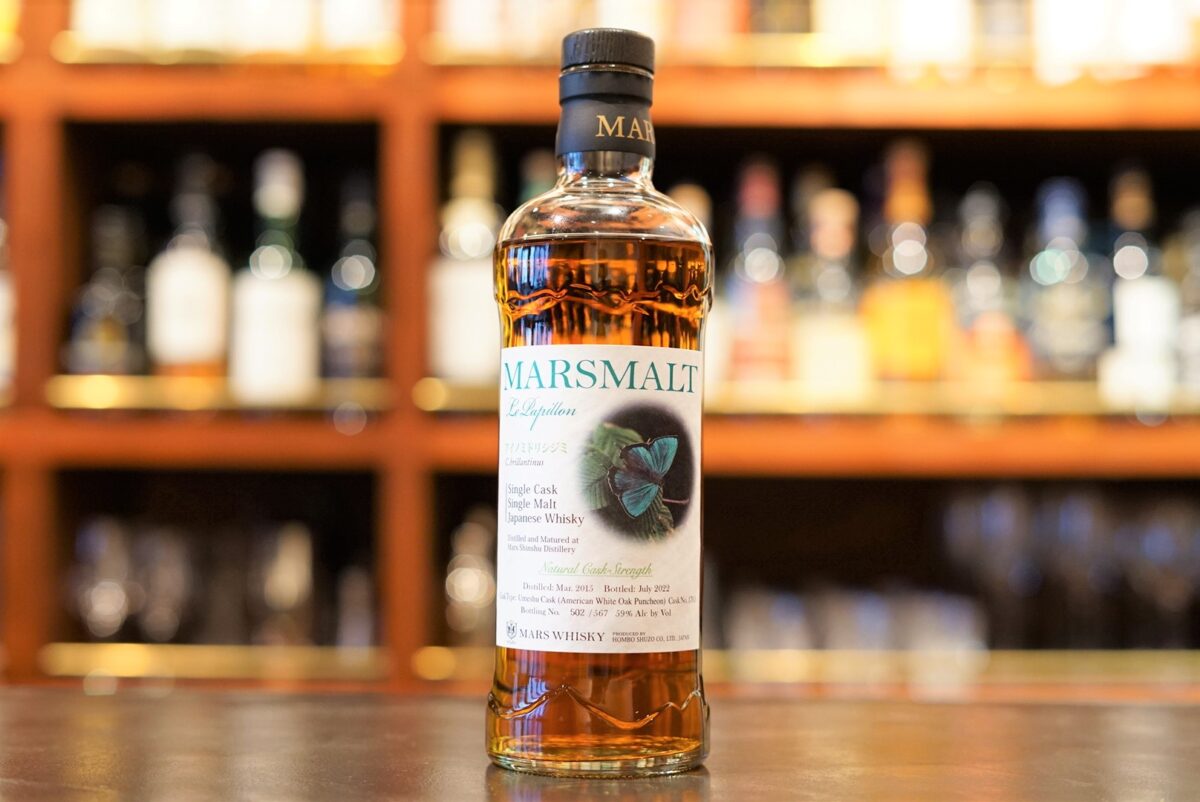 Made from the same barrels used to mature plum wine. Matured for 7 years Single cask of non-peated original

Distilled at Mars Shinshu Distillery in March 2015. Matured for 7 years in empty casks used to mature Umeshu (plum wine) and bottled in July 2022. This single cask whisky is bottled at natural cask strength and non-chill filtered. 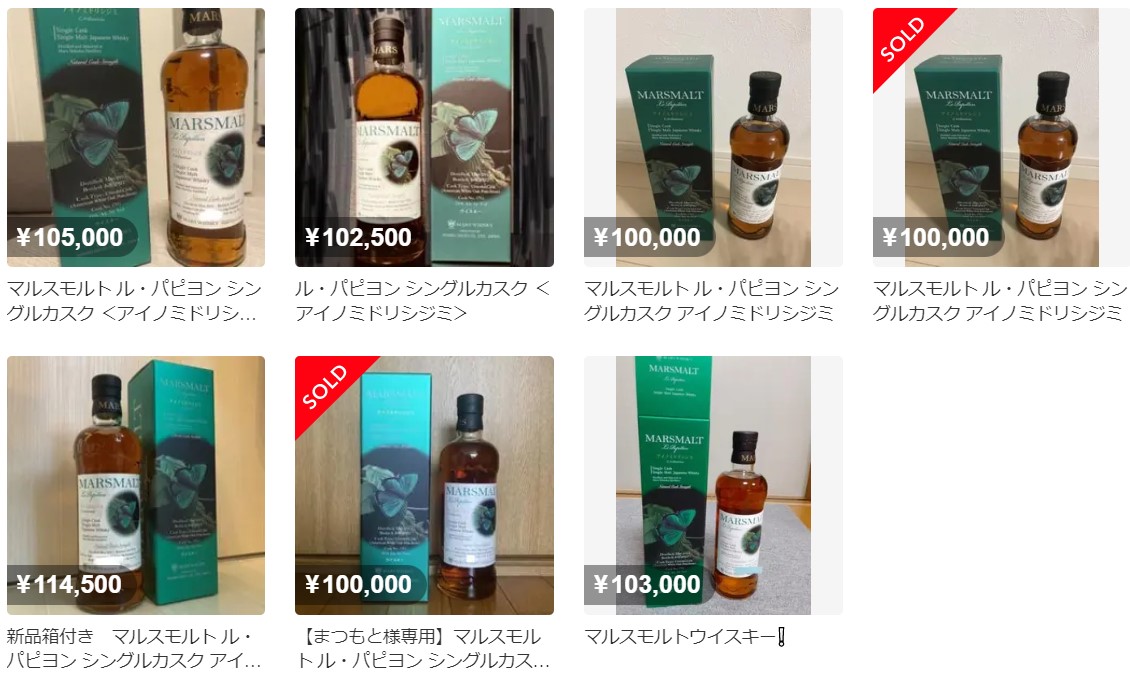 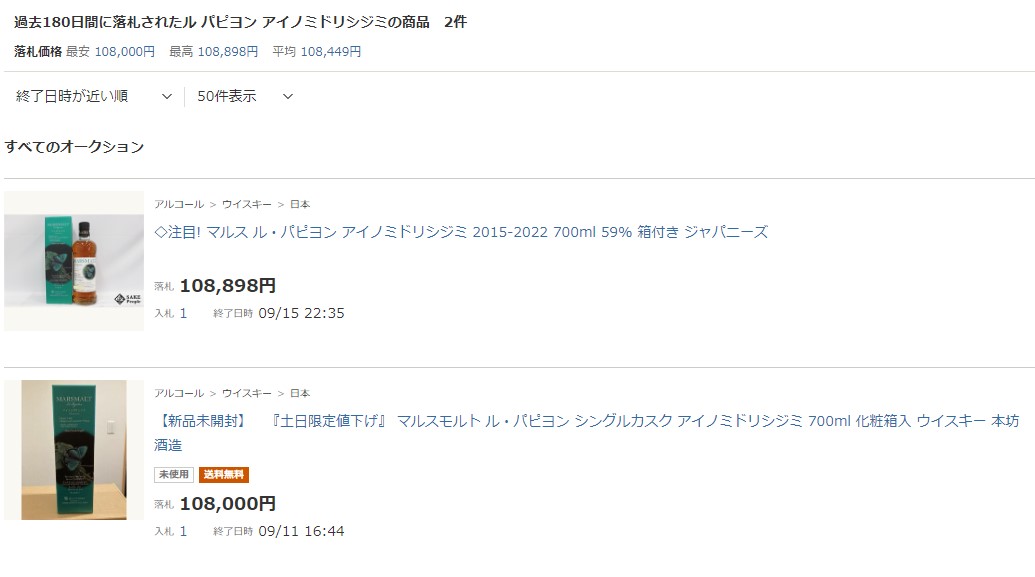 This Papillon series is a single malt whisky that is bottled in single and double casks, and the number of bottles sold each time is very small.

The resale price has also risen considerably, and the current bottle is currently being sold for more than 100,000 yen (Mercari, Yahoo! Auctions).

It has a taste that is hard to find in other whiskies.

The conclusion is that it is very tasty.

It has a mellow mouthfeel without feeling the 59% alcohol content. It is a non-peated whisky with no peculiarities, and you can fully enjoy the taste of plum wine barrel aging. It has a malty, sweet, sour, and astringent taste, all of which are well integrated. It is also delicious straight, but we prefer to enjoy it on the rocks like plum wine on the rocks.

Please check out our other articles on Hombo Shuzo.

[Review]Komagatake IPA Cask Finish Bottled in 2022
It is brewed at Minami Shinshu Beer Komagatake Brewery using plenty of hops, and is brewed in empty barrels with India Pale Ale (IPA) lying down.
[Review] MARS The Y.A. #01 - Features, list price, w...
Vacating mainly malt sake distilled in Shinshu and Tsunuki and aged in bourbon barrels. A fruit incense reminiscent of a tropical country and a flavor reminiscent of the sea bre...