was released in the email newsletter of Komasa Kanosuke Distillery Co.

The release date is Saturday, July 16, and it is already

available at the distillery store. There is not much availability for distillery tours, but if you can go, you may be able to get this limited edition bottle.

The application for the web lottery sales has started from today, July 22 to July 25 at 10:00.

The period is a little short, but don’t forget to apply if you can’t make it to the distillery.

The base for #004 is our 2018 non-peat base sake made in our proprietary three pot stills.

The original sake was matured for 3 years in American white oak rich casks and then aged for 1 year in 2nd fill bourbon barrels. Enjoy it while thinking of the refreshing summer in Kagoshima, a tropical island.

(1) Apply for the lottery sale on the web.

Announcement of winners: Only winners will be notified by e-mail with URL and password for purchase on August 1.

Multiple entries from the same name and address are invalid.

(2) Purchase on site (at the shop in the Kanosuke Distillery)

The product will go on sale on July 16. It is already available at the local distillery store.

Kanosuke Distillery started operation in 2017.
It stands on a spacious site of approximately 9,000㎡ along Fukiage beach on the west coast of Kagoshima Prefecture and is dotted with various facilities. The U-shaped, two-story main building houses distilling facilities, a bar with a great view, and a store selling original goods, allowing visitors to experience the whisky-making process up close and personal.
One of the main features of the Kanosuke Distillery is that it is equipped with three pot stills (distillers). Three pot stills (distillers) The distillery has three pot stills, each with a capacity of 6,000 liters. The capacity of each still is 6,000 liters, 3,000 liters, and 1,600 liters, respectively, and two stills are common for craft distilleries (small distilleries) in the world. Whisky is usually distilled twice, and Kanosuke Distillery uses pot stills with different neck shapes and angles of the upper line arm during the second distillation (redistillation) to create a different aroma and flavor of the original whisky. 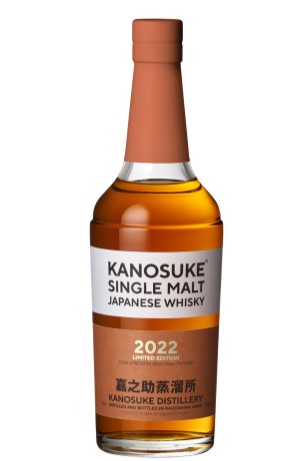 “Single Malt Kanosuke 2022 LIMITED EDITION” is a single malt Japanese whisky produced at the Kanosuke Distillery from 2017 to 2019. It is made with non-peat malt and
The key ingredient is the original spirit matured in sherry casks, vatted in multiple casks, and bottled at cask strength.
The key malt is the original sherry cask-aged spirit, which imparts a full and attractive aroma.
Enjoy the lingering taste of a sunset slowly setting over the East China Sea. (From the manufacturer’s website)

“Single Malt Kanosuke 2021 SECOND EDITION” is a single malt Japanese whisky produced at the Kanosuke distillery in 2018. It is made with non-peat malt and aged in bourbon casks as the key ingredient, vatted in multiple casks, and bottled at cask strength.
The gentle sea breeze that blows at the Kanosuke Distillery cools the beer day by day, allowing it to spend a gentle time maturing.
Please enjoy the elegant sweetness and bitterness of this distilled spirit, matured in the softness of the sea breeze. (From the manufacturer’s website)

“Single Malt Kanosuke 2021 FIRST EDITION” is our first single malt Japanese whisky produced at the Kanosuke distillery in 2017-18.
It is made with non-peat malt, and was vatted and bottled at cask strength in multiple casks, with the key ingredient being the original spirit aged in the American white oak rich cask used for our barrel-aged rice shochu “Mellow Codzuru.“

Finally, our Japanese whisky journey has begun. (From the manufacturer’s website)