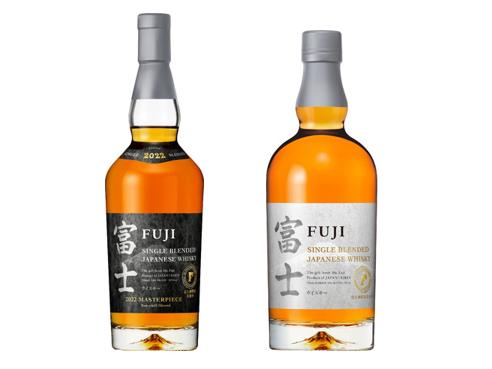 Two new products to be released from Fuji Gotemba Distillery

“Kirin Single Blended Japanese Whiskey Fuji” will be available from the Fuji Gotemba Distillery of Kirin Brewery Company, Limited for a full year (approximately 4,700 cases shipped in the first year) from June 7, 2022, and from “Kirin Single Blended Japanese Whiskey Fuji 2022Masterpiece” will be available in a limited quantity of approximately 1,000 bottles at the Kirin online store DRINX from April 19, 2022.

As part of its business policy for 2022, Kirin plans a major renewal of “Riku” and export of “Fuji” to China and Australia. We plan to develop the brand even more strongly.

Fuji Gotemba Distillery produces malt and grain in the same distillery, a new style of product that is unique in the world. All of the original malts and grains are made using the same Fuji subterranean water, the same brewers, and the same natural environment.

This is a superb blend of rare, precious, and long-aged original sake that concentrates the characteristics of the Fuji Gotemba Distillery. The flavor is multi-layered with ripe fruit aroma, custard richness, floral, spicy, and other colorful aromas.

Fuji Gotemba Distillery, located at the foot of Mt. Fuji, is one of the few whisky distilleries in the world to handle the entire process from preparation to bottling of malt and grain whiskies.
The distillery produces a wide variety of Kirin Group products, including whisky, mineral water, and canned chuhai, in a natural environment blessed with abundant subterranean water from Fuji, a cool climate, and frequent fog throughout the year.

In February 2019, the company invested approximately 8 billion yen to expand its production facilities in preparation for further future increases in whiskey sales volume.

In order to produce a wide variety of malt whisky base whisky, four new small fermentation tanks and two lines of four distillers were installed to approximately double the base whisky production capacity, and the barrel storage capacity was increased by approximately 20% through renewal and enlargement of the barrel aging warehouse. The company aims to establish a production system that will ensure a stable supply of high quality whiskey in the future. Operation is scheduled to start in June 2021.

The taste has been enhanced by revising the blend ratio, mainly using a wide variety of original sake from the Fuji Gotemba distillery.

In terms of the package, the logo has been enlarged to enhance identification to address issues such as “difficulty in recognizing the product on the sales floor” and “design that is too modern and not whisky-like”. The use of a gold band to emphasize the quality of the product and its whisky-like character helped to overcome these issues.

In addition, sampling will be conducted for 500,000 people, and a TV commercial will be introduced for the first time in 17 years

for a domestically produced whiskey.

Kirin Single Grain Japanese Whiskey Fuji” was launched in the United States in September 2021, and will be launched in China and Australia in April 2022. Armed with the straightforward and uniquely Japanese name “Fuji” we aim to further increase awareness of the product on a global scale.

With the launch of the two new “Fuji” products mentioned above, in addition to overseas expansion, we are targeting a 202% year-on-year increase in sales for 2022, to 1.2 billion yen. 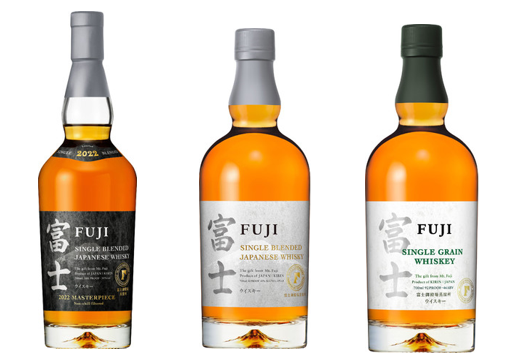