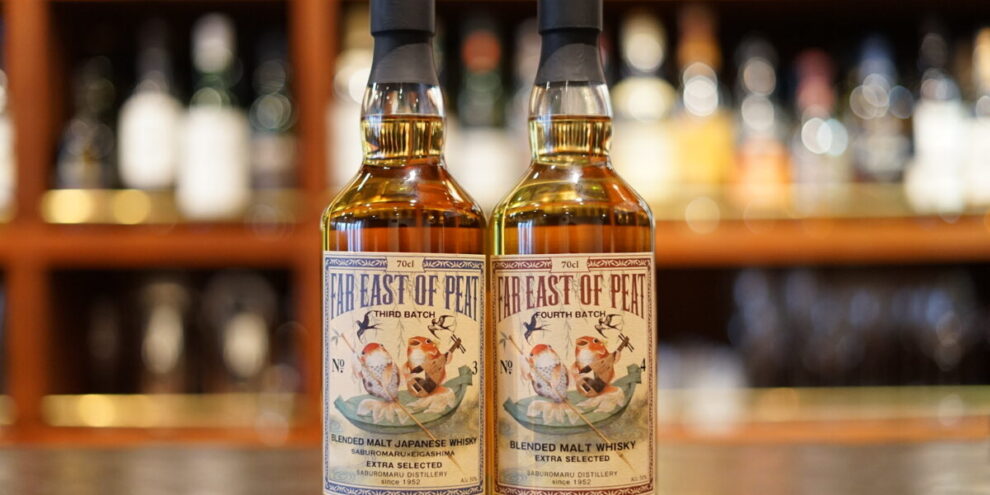 The sale of this collaboration is also sold two at the same time. THREE BATCH is limited to 600 pieces. 4 BATCH limited to 5,000 pieces.

On February 22, 2022, it was sold only by visitors to Saburomaru Distillery, and it was sold by lottery.

By the way, the blue one of the label character and the outer frame is THIRD BATCH, and the red one is FOUR BATCH.

The only distillery in Hokuriku, established in 1952.
Amidst the postwar rice shortage, the distillery obtained a license to produce whisky in 1952. Since then, they have been brewing sake in winter and Whisky distilled only during the summer months The company is also a member of the Japan Society for the Promotion of Science (JSPS). 200 bottles are made per year. Plans are underway to make 300 in the future.
Since the beginning, the company has focused on smoky whiskey, using Islay peated malt and more recently Peated malt from Toyama Prefecture The company uses a variety of ingredients to make its products. In order to preserve the natural flavor, no cooling filtration or coloring is used.

In 2018, we installed a state-of-the-art mash tun from Miyake Mfg.
In 2019, we collaborated with a local company, Oigo Seisakusho, to produce a cast pod still ZEMON. The company has developed a
In 2020, one wooden fermenter will be installed.

The main difference from other distilleries is the world’s first cast pod still ZEMON. The company uses a

There are three major features.
(1) The casting method enables molding by die and quick delivery. Also, it is possible to add sufficient wall thickness at a low cost, which increases the service life of the main body.
(2) Free molding by the casting method allows for various types of sake quality. Also, by unitizing each part, only worn parts can be replaced and functions can be expanded.
(3) Made of a copper-tin alloy containing approximately 90% copper and 8% tin. Tin is a high-grade metal that is traded at about three times the price of copper.
Tin has been used since ancient times mellow the taste of alcohol It is said to have been used for sake and shochu coolers. ZEMON produces high quality spirits thanks to the dual effects of copper and tin. Contribute to It is also used as a cooler for sake and shochu.
Reference: Wakatsuru Sake Brewery official website

See also ↓ for information on the Saburomaru Distillery.

Akashi is made at the White Oak Distillery in Eigashima, Akashi City, Hyogo Prefecture.
The distillery is now renamed Eigashima Distillery to make it easier to understand for foreign tourists.

A small fishing village, Eigashima has a pleasant climate throughout the year and benefits from a mild maritime climate right next to the Akashi Strait on the inland sea.
The license to produce whisky and wine was obtained in 1919.
The first distillation of whisky in Japan took place at the Yamazaki Distillery in 1923, but it was the Eigashima Distillery (formerly White Oak Distillery) that received the first patent for whisky distillation in Japan in 1919.
The year 1919 was when Masataka Taketsuru, the father of Japanese whiskey, went to Scotland to study whisky distilling.
It is surprising that the White Oak distillery existed at an early stage.
However, although a patent was obtained, the correct whisky-making process was not handed down, and it is said that what was being made at the time was imitation whisky that imitated whisky. 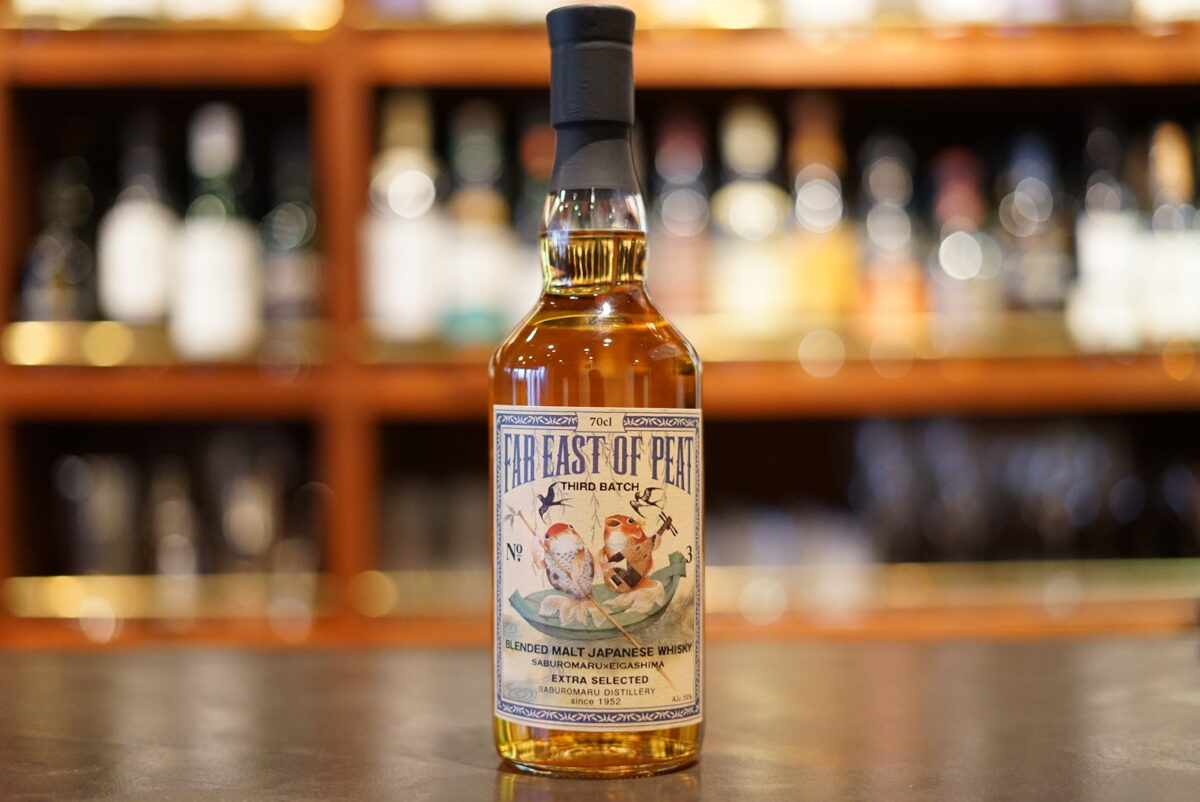 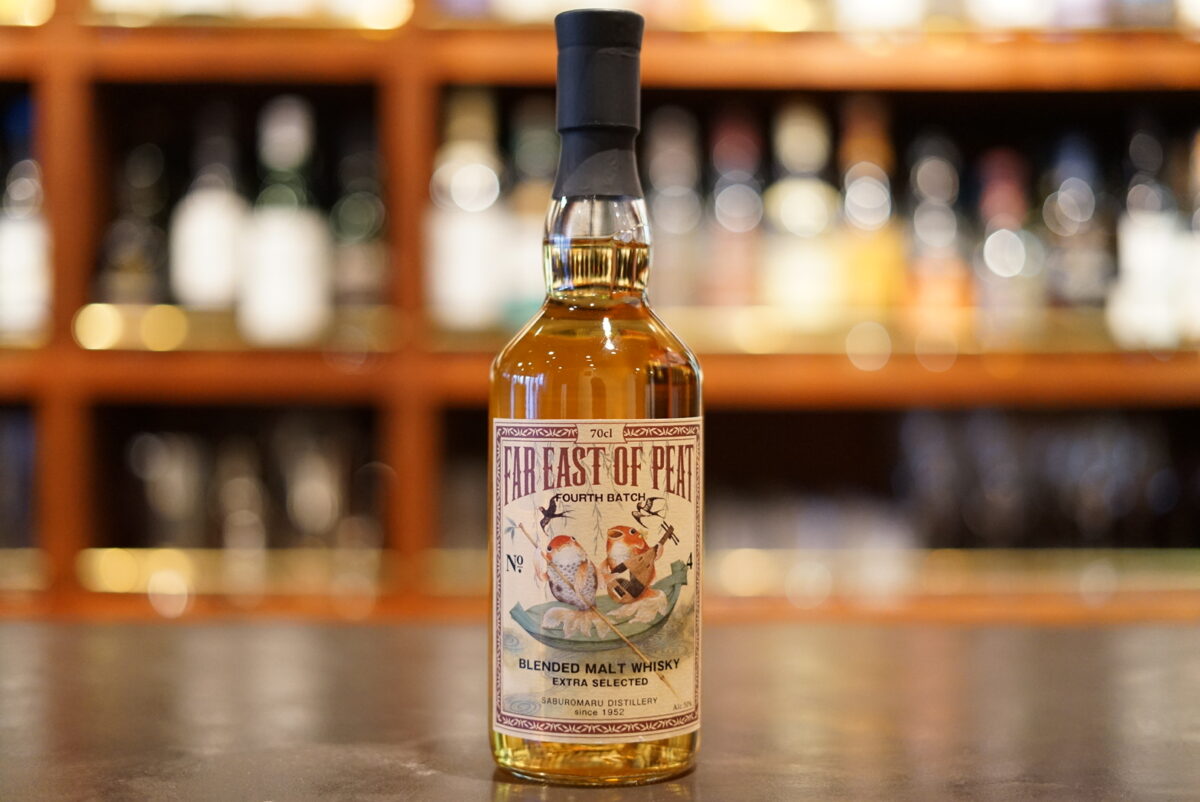 Selected and blended with Billy Peated Malt and Eigashima Brewery’s Bourbon Cask Aged Lightly Peated Malt from the Saburomaru Distillery, distilled in 2018.
This is a supple and robust collaboration of Japanese craft distilleries, with the fresh, complex fruity character of the Eigashima malt boosted by the robust Saburomaru malt.

A blend of scotch malts, along with a selection of 2018 distilled hebdomadally peated malts from Saburomaru Distillery and bourbon cask aged lightly peated malts from Eigashima Brewery.
We used only malt base alcohol to create a gorgeous, multi-layered flavor. 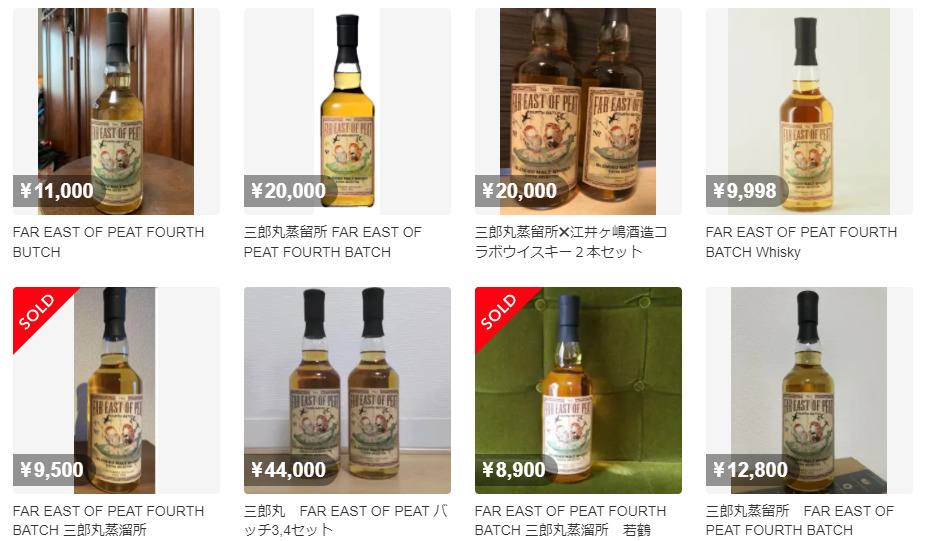 This is the second exchange of original sake from the Saburomaru distillery. We feel that both are quite unique bottles.

First of all, THIRD BATCH is notable for its sweetness. The sweetness that cannot be imagined from the aroma invades the mouth. Combined with the oily taste, you can feel the sweetness quite strongly. There is not much peat, and the sweetness is followed by citrus freshness, coniferous and minty woody notes. The flavor does not change significantly when watered down, and while the oily character is diminished, it does play a role in the drinkability of the beer. This is a bottle to be enjoyed slowly.

FOURTH BATCH has a more distinctive flavor. It is peculiar from the aroma to the taste, and features complex flavors of Saburomaru, Eigashima, and Scotch malts. This one has a light mouthfeel that makes the 61% alcohol content seem less noticeable, and when watered down, it shows a different side to THIRD BATCH.

When we actually experience the transformation of the original sake we encounter into a completely new flavor with its own individuality, we are excited by the hidden potential of the sake exchange. I am very much looking forward to the next sake exchange to see which distillery’s sake will show us its potential.

■ Please be sure to check out our other articles on Saburomaru Distillery and Eigashima Distillery.