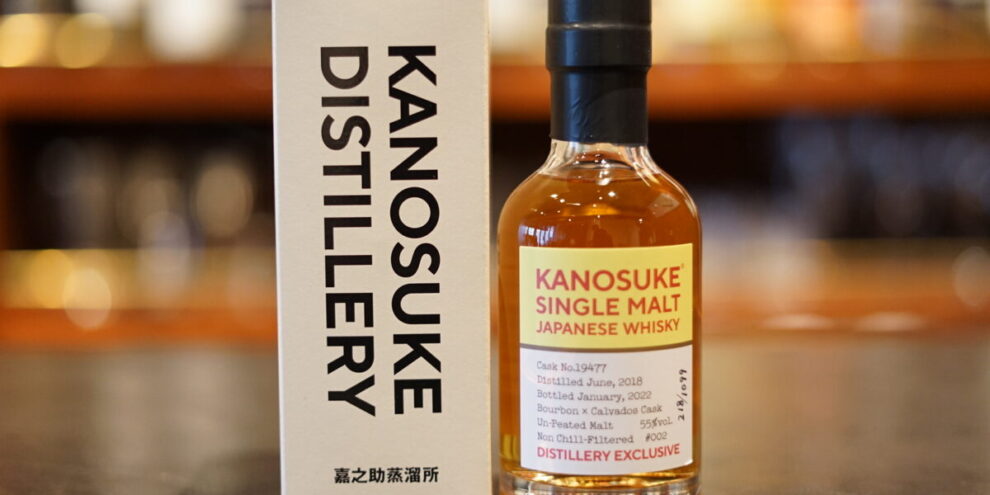 Established in 1881, Komasa Shuzo is a shochu maker with a long history. Its representative brand is Mellow Kozuru, a barrel-aged rice shochu with a unique sweetness. The company applies its expertise in barrel aging and rice shochu making to whiskey and craft gin.

The Single Malt Kanosuke Distillery Limited Edition Bottle is a single malt that offers a completely different character depending on the combination of barrels and aging period. Like #001, it is hand-numbered.

This time, #002 is made from non-peated barleywine distilled in Kanosuke Distillery’s unique three-pot still and aged for about 1.5 years in bourbon barrels and 2 years in Calvados barrels. Limited edition of 1,099 bottles.

The Kanosuke Distillery stands on a site of about 9,000 square meters along Fukiage beach on the west coast of Kagoshima Prefecture.
In addition to the distillation facilities, the U-shaped, two-story main building houses a BAR with a great view and a store selling original goods.
The main features of the distillery are The distillery is equipped with three pot stills (large, medium and small). The main feature of the distillery is that it has two distilleries. The distillery has a capacity of 6,000 liters, 3,000 liters, and 1,600 liters respectively.
In the world, craft distilleries (small-scale distilleries) usually have two units. Whiskey is usually distilled twice, and by using pot stills with different neck shapes and upper line arm angles during the second distillation (re-distillation), the aroma and flavor of the raw material can be changed more richly.
Fukiage beach, where the distillery stands, is one of the three largest sand dunes in Japan and has been selected as one of the 100 best beaches in Japan. The beach is about 47 km long from north to south, and the strong wind rises from the surface of the sea, and the area around the distillery is covered in white mist from the fine spray from the sea. It is a place with a wide range of temperatures, with hot summers and cold winters, where it is not unusual for the temperature to drop to around 0°C and snow to fall.

For more information on the Kanosuke Distillery, please see also this article. The base of #002 is a 2018 non-peated raw spirit that was made in our original three pot stills.

After maturing in bourbon barrels for about a year and a half, this single malt is aged for two years in Calvados barrels, a distillate made from apples in Normandy, France, before bottling. You can enjoy a well-balanced combination of freshness and depth of flavor. 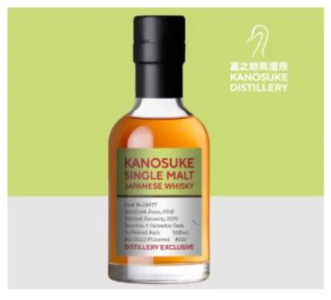 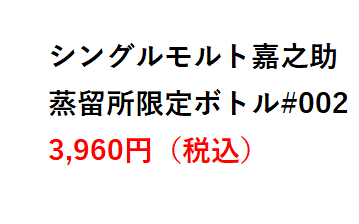 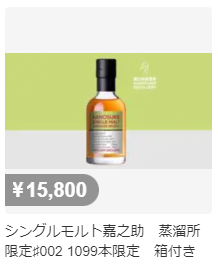 We have not been able to confirm the price on Yahoo Auction. (As of February 8, 2022)

The flavor of Calvados is quite strong. There is a sweetness, sourness, and astringency reminiscent of baked apples and plums.

It tastes as if you are eating an assortment of fruits, mainly apples, but you can also feel the sweetness and bitterness of the malt.

By adding water, you can reduce the astringency and bring out more sweetness. Please enjoy it straight or with a twist of whiskey.

Limited edition of 1,099 bottles, 200ml. This is a very rare whiskey with a very high level of perfection, so if you have the chance, you must try it.

For more information on other whiskeys from the Kanosuke Distillery, please click here.