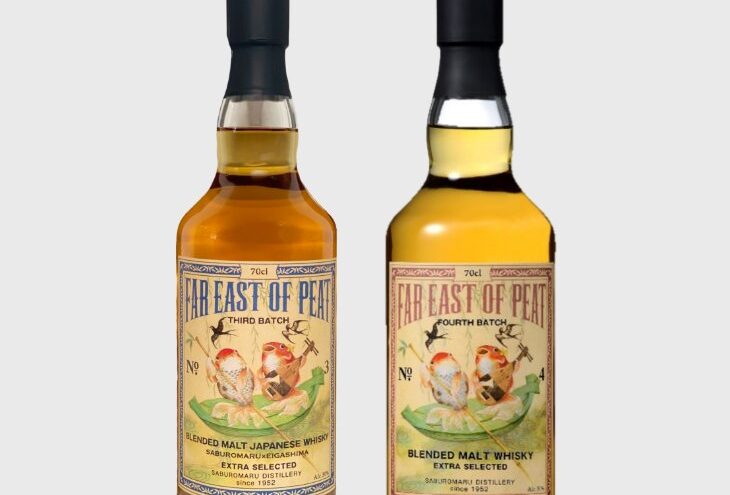 This time we exchanged unblended whisky from Wakatsuru Shuzo’s Saromaru Distillery and Eigashima Distillery of Eigashima Shuzo Co. This is a collaboration between two distilleries that have been producing whiskey since before the local whiskey boom in the 1980s.

Product Concept
We selected and blended the 2018 distilled Billy Peated Malt from Saburoumaru Distillery and Lightly Peated Malt aged in bourbon casks from Eigashima Shuzo. The Eigashima malt’s fruity freshness and complexity is complemented by the robust Saburoumaru malt, creating a supple and robust collaboration between Japanese craft distilleries.

Citation: Me to, ALC.

Only members of “Me and ALC.” online store can purchase. If you haven’t registered yet, please do so.

Announcement of winners: Winners will be notified to the e-mail address entered in the application form on or after February 10 (Thu).

There is a quiz (5 questions in total) in the application guidelines, and after answering all the questions, the winners will be drawn according to the number of correct answers.

Only one entry per person is allowed. The quiz cannot be cancelled or changed after submission, and the contents of the quiz must not be made public through SNS or other means.

The SaburoMaru Distillery tour is by reservation only, and there are only a few spots left for the tour on February 22, so if you are planning to visit the distillery, we recommend that you make a reservation as soon as possible. Reservations for the tour can be made up to two days in advance.

The availability of the distillery tour is Click here from.

For more information or to apply for a distillery tour, please contact

The only distillery in Hokuriku, established in 1952.
The distillery was licensed to make whiskey in 1952 amidst the rice shortage after the war. Since then, the distillery has been brewing sake in winter. Distilling whisky only during the summer Since then, the distillery has been making sake in winter and whiskey in winter. The annual production is 200 bottles. Planning to make 300 in the future.
Since the beginning of the operation, we have been focusing on smoky whisky, using Islay peated malt and recently Peated malt from Toyama Prefecture The whisky is made with Islay peated malt and more recently with It is characterized by the fact that it is not cooled, filtered, or colored at all in order to preserve its natural flavor.

In 2018, we installed the latest mash tun from Miyake Manufacturing.
In 2019, we collaborated with a local company, Oigo Manufacturing, to develop a cast pod still ZEMON in 2019.
In 2020, one wooden vat fermenter will be installed.

There are three major features.
(1) The casting method makes it possible to mold the product using a mold, which allows for short delivery times. (2) The casting method enables molding using molds, which results in shorter production lead times, and allows for sufficient wall thickness at low cost, resulting in a longer service life for the body.
(2) Various liquor quality is realized by free molding by casting. In addition, it is possible to replace only worn-out parts or expand functions by unitizing each part.
(3) The product is made of a copper-tin alloy containing about 90% copper and 8% tin. (3) Made from a copper-tin alloy that contains about 90% copper and 8% tin. Tin is a high-grade metal that is traded at about three times the price of copper.
Tin has been used since ancient times to mellowing the taste of alcohol. It is said that tin is a high-grade metal that sells for about three times the price of copper, and has been used for liquor containers and shochu coolers. ZEMON contributes to the production of high quality spirits through the dual effects of copper and tin. to the production of high quality spirits. It has been used for sake vessels and shochu coolers.
Reference: Wakatsuru Sake Brewery official website

See also this ↓ for more information on the Sanromaru Distillery. 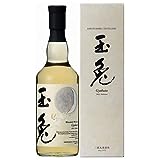 三郎丸蒸留所 玉兎 Gyokuto 2021 Edition 700ml 46％ カートン付
created by Rinker
三郎丸蒸留所
¥6,980 (2023/02/06 23:34:09時点 Amazon調べ-詳細)
[Review] SABUROUMARU GYOKUTO Edition 2021
Saburoumaru Distillery of Wakatsuru Shuzo is known as the only distillery in Hokuriku. In winter, sake is brewed and Distilling whiskey only during the summer In winter, sake is...

＜原酒交換による新たなウイスキー！お一人様1本限り！＞ あかし ダブルブレンダーズ モルトハーモニー 47％ 500ml 限定品
created by Rinker
¥5,280 (2023/02/06 23:34:09時点 楽天市場調べ-詳細)
[Review] Akashi Double Blenders Malt Harmony
The raw malt distilled at the Nagahama Distillery and the raw malt distilled at the Eigashima Distillery are exchanged with each other. Both blenders met at the Eigashima distil...