The release information of AMAHAGAN World Blended Edition Summer was released on the news of the official website of Nagahama Roman Beer Company (Nagahama Distillery). The release date isJune 22, 2021.

It will be sold at liquor stores nationwide and on the Nagahama Roman Beer website.

The appearance is a shining light gold. The top notes are refreshing citrus and fruity aromas such as lemon. Soft and sweet aroma of salted caramel and brown sugar. Peat-derived seaweed and smoke accentuate and enhance the overall aroma. On the palate, there is a gorgeous fruitiness with vanilla and lemon pie from the barrel. You can enjoy the malty taste of Nagahama malt, black pepper and other spices, cocoa, and a pleasant smoky aftertaste.

AMAHAGAN World Blended Edition Summer will go on sale from June 22, 2021 (Tuesday) at liquor stores nationwide and on the Nagahama Roman Beer website.

Edition Summer is the first peat type to be released in the series. It is made by blending malt from the Nagahama distillery with several types of peated malt from overseas. A portion of the malt is additionally aged in bourbon barrels to create a pleasant taste with citrus fruits such as lemon, a soft sweetness of vanilla, and a smoky aftertaste, suitable for hot summer days.

This product is especially good with highballs. We have bottled it in 750ml so that our regular customers can enjoy Amahgan’s smoky highball as much as possible. We hope you will enjoy its refreshing taste to your heart’s content.
Reference: Nagahama Roman Beer Restaurant, Beer and whisky Production

The unique shape of the pot stills installed here reminds us of the very origins of whisky making.
The Nagahama Distillery was originally a rice warehouse from the Edo period, which was renovated and started making beer in 1996. Later, in 2016, equipment for whisky production was introduced. The building has an atrium, with saccharification tanks and distillers on the first floor, and crushers and fermentation tanks on the second floor.
There are two pot stills for first distillation and one for second distillation, and the heating system is an alambic type pot still shaped like a gourd with indirect steam, a type of pot still often used for distilling brandy. Among Japanese craft distilleries, only the Nagahama Distillery currently uses this alambic type pot still. It has the advantage of producing a clearer, softer, and less muddy liquor.

There has been a lot of trial and error from its inception to now. Some of the major changes include changing the malt grinding ratio, changing the fermentation time from 60 hours to 72 hours, and changing the distiller from two to three. Also, the number of distillers was increased from two to three. When the distillery was founded, the first distillation kettle was 1000 liters and the second was 500 liters, but the second kettle was replaced and all three kettles are now 1000 liters. Also, following the example of Scottish distilleries, the distillation equipment is rarely cleaned. The distillery has undergone many changes in the four years since its establishment.

3. The main lineup of the AMAHAGAN series 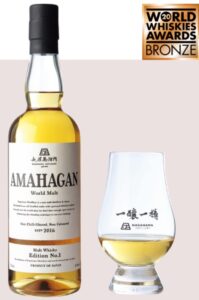 The aroma of round malt derived from Nagahama malt is intricately intertwined with fruity and deep notes reminiscent of orange chocolate, and the whole is enveloped by a sweet aroma of vanilla. In the mouth, you can enjoy a full-bodied attack followed by a gorgeous aftertaste in the nose. 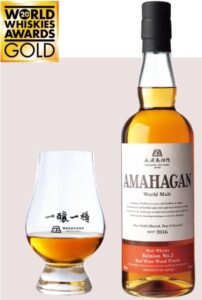 The red wine-derived flavors of raisins and berries are in perfect harmony with the malty taste characteristic of the Nagahama Distillery. At the end, you can feel a refreshing orange peel. The sweetness of the grains spreads throughout, and the moderate bitterness tightens the flavor. 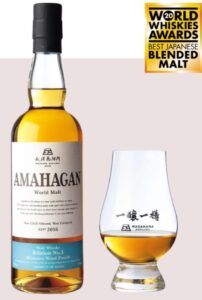 The appearance is a light amber color. The aroma of sweet malt, typical of Nagahama malts, overflows into the glass, mingling with warm fruits such as oranges and red apples, making it more mellow. As time passes, the aromatic woody nuances from the Quercus serrata become even more pronounced, and finally, a sweet caramel woodiness is felt. On the palate, there are flavors of baked orange and savory brown sugar. The sweetness is followed by a rich lingering aftertaste, as if the bitter chocolate is slowly melting in the mouth. 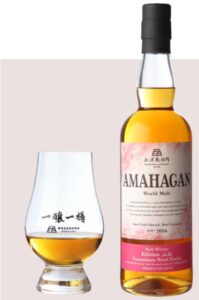 The appearance is a reddish amber color. The malty sweetness that is characteristic of Nagahama malt is maintained, and the aroma is sweet, gentle, and elegant, derived from mountain cherry blossoms. It has a “Japanese” flavor reminiscent of cherry blossom rice cakes and plums. The mild orange peel and molasses characteristic of the Amahagan series, and the gorgeous and elegant sweetness that spreads in the mouth. The aftertaste is leafy and pleasantly astringent, like black tea. 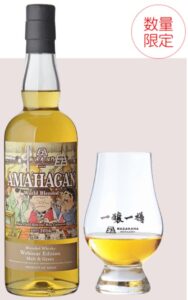 Pale golden in color. The top notes are savory cereal and brown sugar with a soft, sweet aroma. The top notes are a soft, sweet aroma of fragrant cereals and brown sugar, followed by multi-layered aromas of burnt caramel and lush fruit. The palate is fruity and spicy with a warm taste of apricot, peach, smooth Calvados and then cotton candy. A lingering, mild smokiness from the long-aged lightly peaty original finishes the taste.