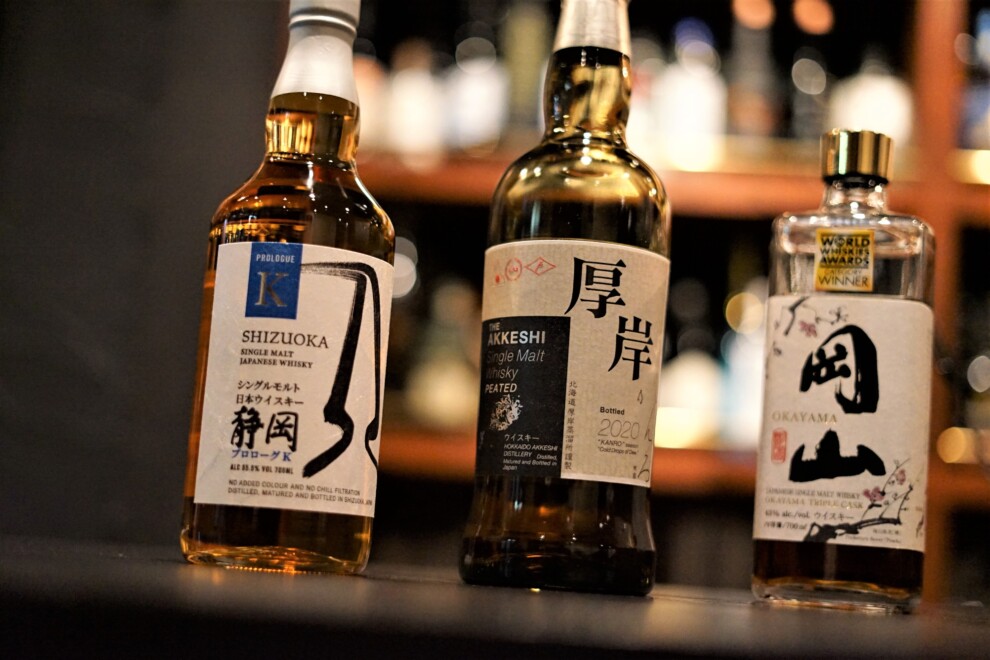 On February 16, 2021, the definition of Japanese whisky was finally established as Standards for Labeling  of the Japan Spirits & Liqueurs Makers Association.

In this article, I would like to explain the actual situation of Japanese whisky so far, the content of this standards, and the impact of establishing this.

1． Actual Conditions and Problems of Whisky in Japan

Under the current Japan’s liquor tax law, whisky does not define “manufacturing area”, “storage environment or period”, and only roughly defines “mixture”.

The following is the original text of the Liquor Tax Act, which describes the definition of whisky.

It is written difficultly, but if you explain it in an easy-to-understand manner,

This is the definition of “whisky” under the liquor tax law. If this definition is true, it can be manufactured and sold as “whisky”.

It’s funny, isn’t it? Up to 90% can be said to be whisky even if you use anything other than malt whisky or grain whisky. There is no definition of “manufacturing area” or “storage environment or period”, so to say badly, it is as much as you want.

1－2． Type of product based on unblended whisky used

As mentioned above, since the liquor tax law does not define “manufacturing area” or “storage environment and period”, some domestic sake brewers sell “bulk whisky” imported from overseas as it is in Japan, blend it with Japanese whisky, bottle it, and affix a product label using Kanji characters. (There is no problem with liquor tax legally) Of course, some products are manufactured using 100% Japanese whisky undies and are written as “Japanese whisky”.
From the “manufacturing area” of the whisky liquor used, I tried to classify it into three types.
A. 100% Japanese whisky
B. Overseas whisky + Japanese Whisky [Clearly Stated]
C. Overseas whisky (+ Japanese Whisky) [not specified]

All of the whisky liquor used to make, store, and ultimately bottling whisky liquor at distilleries in Japan is made from Japanese whisky. Some manufacturers label it “Japanese Whisky“ or “ジャパニーズウイスキー“.

There is no problem in liquor tax laws even if whisky which was made by whisky original liquor imported from overseas is sold, and there is no obligation to label it.
However, some manufacturers clearly state the “production area” of whisky liquor used in their products in an easy-to-understand manner.

In particular, the following products are sold as a product concept that blends Japanese whisky undies and overseas whisky originals, such as Venture Whisky’s “Ichiro’s Malt & Grain World Blended”, Suntory’s ,“碧Ao” Nagahama Distillery’s “Amahagan World Malt”,  and Nikka’s“Nikaka session”“, Since it is clearly stated that Japanese unblended liquor and overseas unblended liquor are blended respectively, general consumers can purchase it after understanding it.

Of course, this does not violate the Liquor Tax Law, nor does it mean that the manufacturer has bad intentions. I believe that imported whisky is used as a means to provide inexpensive whisky that meets consumer demand. (It doesn’t even use the term “Japanese whisky.”)
However, it is not clear whether consumers are buying whisky with an understanding of what is inside, and there is a high possibility of confusion because many people buy whisky thinking it is Japanese whisky.

On the other hand, in Scotland, Ireland, the United States, and Canada, the reliability of each product is maintained because the “production place” and “storage period” of whisky are defined in detail by law.

Sugared, fermented and distilled at distilleries in Scotland, packed in oak barrels of no more than 700 l and aged for more than three years in a bonded warehouse in Scotland, it is called “Scotch whisky.”

Sugared, fermented and distilled at distilleries in Ireland, packed in oak barrels of no more than 700 l and aged for more than three years in a bonded warehouse in Ireland, it is called “Irish whisky”.

Distilled from grains at distilleries in the U.S., then aged in new oak barrels (but no ripening is required for corn whisky) and blended with spirits, bottled with an alcohol count of 40% or more, it is called “American whisky”. In addition, the type, proportion, and manufacturing method of the raw material are further subdivided as follows.

* Those manufactured in Kentucky are often called “bourbon whisky”, but by law they are not limited to Kentucky, and it is said that it is good in the United States.

It is said that all of them aged for more than 2 years can be written as “straight to whisky”.

Canadian whisky is a Canadian distillery that is saccharified, fermented, distilled, and aged for more than three years in a Canadian bonded warehouse using barrels with a volume of 180 liters or less.

As described above, the laws of each country clearly state that scotch, Irish, American, and Canadian whiskys have their own “manufacturing area” and that the “ripening period” is 2 to 3 years or more (with some exceptions).

This time, we will confirm the specific contents of the “Standards for Displaying Japanese Whisky in Whisky” established by the Japan Sake Brewers Association.

This standards apply to both domestic sales and overseas export sales.

It was considered a good thing to name only whisky that met the above A to D requirements as “Japanese whisky”.

In addition, if the requirements set forth in the preceding paragraph are not met, the following notations should not be associated with Japan.

These are the details of this Standards for Labeling. It is quite finely defined, and I think that many of the whiskies that have been sold so far will conflict with this Standards. I would like to pay attention to how each manufacturer responds to this.

3． Impact of Standards for Labeling

The Standards for Labeling set out this time are expected to have a significant impact on many of the whiskies currently on sale.
For manufacturers that have previously manufactured whisky in accordance with this standards, consumer confidence will be even higher. On the other hand, manufacturers that comply with the liquor tax law but use imported undies and manufacture and sell it as if they were Japanese whisky may lose the trust of consumers if they do not take appropriate responses. In addition, I summarized the possible influences now.

As I mentioned at the beginning, there is no detailed definition of Japanese whisky under the liquor tax law, so I guess there are many consumers who purchase whisky from Japanese manufacturers currently in circulation under the assumption that it was produced at a distillery in Japan. This is the same for whiskies exported not only in Japan but also overseas. Japanese whisky manufacturers export and sell many products to the United States, Europe, and other countries due to the popularity of Japanese whisky in recent years. However, some of them are manufactured in 100% domestic distilleries, while others are not.

For example, “what is not” can be the following products.

If you are not familiar with whisky, you may buy it under the assumption that it was produced at a distillery in Japan. In fact, if you know that the contents use whisky liquor imported from overseas, it will naturally cause confusion for consumers.

3－2． Protecting the value and reliability of Japanese whisky

It is easy to imagine that the reliability of Japanese whisky will be significantly reduced if products using original whisky are sold as if they were 100% Made in Japan and that is regarded as a problem all over the world. If only the product loses credibility but also it will have a negative impact on the development of Japanese whisky in the future, it becomes less reliable for the entire Japanese whisky.

Today, the world appreciates Japanese whisky and has won various awards at exhibitions. Unfortunately, however, there are products that would have been made only with whisky liquor imported from overseas. I don’t know if the judges understand that and evaluate it.

I think it is necessary to make the “correct display” so as not to mislead in this way and not to lose trust.
There are many confusing products in circulation, so I think that the value and reliability of Japanese whisky will be protected by establishing standards and rules as “Japanese whisky”, manufacturing in accordance with the rules, and selling them “correctly displayed”.

It is not “evil” to use imported whisky liquor. Blending whisky liquor with various characteristics to create a delicious whisky like never before is also a result of the delicate taste of the Japanese people. I think the important thing is to “display” that thing correctly.

Conversely, if all of the whisky liquor used is distilled to stored in Japan, it should be displayed as “Japanese Whisky” to indicate its value.

By clarifying the classification of Japanese whisky by “manufacturing area”, “storage environment and period”, “type of original sake blended”, etc., manufacturers who make whisky honestly and seriously should be properly evaluated. If that is achieved, it will attract attention from all over the world.

“Ichiro’s Malt” is now immensely popular around the world. April 1, 2022 It seems that …