Chapter 1. The Birth of Whisky｜History of Whisky in Japan

Here we will compile the history of the birth of whisky from a vast amount of data and compare it with Japan at that time.

1-1. The Birth and Etymology of Whisky

The word “whisky” is said to have its origin in the Gaelic word “Uisge Beatha,” and the first historical reference to it is said to be a soldier’s report on the Irish spirit “Usquebaugh” when King Henry II of England invaded Ireland in 1172. However, since there are no historical documents to substantiate this report, the official date is 1494.
The English troops who occupied Ireland in the 12th century

were recorded to have heard the word as Uishgi, which later became Usquebaugh, then Usque, then Whisky, and so on.

The earliest surviving record of a whisky production is found on a calfskin scroll in the 1494 Scottish Royal Treasurer’s Record Book: “By order of the king, John Coe, a monk, was given 8 bolls (about 500 kg) of malt to make aquavite (Latin for “water of life”)”. The first written mention of the noun “whisky” was in 1755 in an English dictionary compiled by Dr. Samuel Johnson.
In that English dictionary, it is described as “a distillate that comes out with flavoring,” and it seems to have been so-called imitation whisky, which is thought to have been flavored with flavoring, etc. in the new pot without being aged at that time.

The maturing process is said to have started during the moonshining period from 1644 to 1823, and the technique of drying malted barley with peat was also developed during this nearly 200-year moonshining period.
The aging process began when whisky was hidden in sherry casks due to government crackdowns.
The “whisky tax” introduced by the Scottish Parliament in 1644 resulted in moonshining, an event that, oddly enough, laid the foundation for Scotch whisky.
This led to the creation of the unique flavors and production methods of Highland and Lowland whiskies.
The Highlands are surrounded by a harsh natural environment, with steep mountains and fast-flowing mountain streams, making it a perfect place to hide the whisky, and it was fortuitous that the environment suitable for whisky making was coincidentally available.
Furthermore, half of all existing distilleries in Scotland (about 100) are located in Speyside, as a result of the fact that moonshiners gathered in this area.
On the other hand, in the Lowland region, moonshining did not go as well as it should have, and the distilleries fell into disuse.
The reason for this was the gentle hilly terrain, and there must have been a limit to moonshining in an environment with a good view.
The pot stills were modified to produce large quantities at a time, but the quality deteriorated and the lowland malt gradually went into decline.
However, the appearance of the café still, described later, was not enough.
However, with the advent of the café still (see below), Roland began to focus on grain whiskey production, and the company came back to life.
Later, when Scotland was annexed by England in 1707, the whisky tax was raised further, but to no avail.
In 1713, a “malt tax” was introduced, which imposed a tax on the amount of malt in whisky, but producers tried to lower the tax by using unmalted barley, wheat, and rye as ingredients.
This is said to be the beginning of grain whisky.
In 1823, the government finally realized that it was just a game of chance and introduced a “whisky production license fee,” which allowed whisky makers to make whisky with impunity.
Glenlivet was the first to obtain this license.

2. Birth of the distiller

I would also like to mention the history of the “distiller,” which is indispensable in the production of whisky.

2-1. Ranbiki, a distiller born from medicinal use

There are few written references to distillers, the oldest being the discovery of a distiller for perfumery at the site of Tepegawra in Mesopotamia, 3500 B.C. The first distillers were introduced to Japan in the 16th century.
Distillers were introduced to Japan around the middle of the 16th century ( Azuchi-Momoyama~early Edo period), when shochu production began in the Ryukyu Kingdom, and around the 17th century, during the Ryukyuan invasion by the Satsuma clan, Awamori for medicinal purposes was introduced to Edo and Kyoto.
Later, an alambic distiller made in Southeast Asia landed on the island, and the distiller “Ranbiki” was completed while referring to this alambic.
It is written “Ranbiki” in Chinese characters.
The name was derived from the fact that alambic was a transcription of alambic and that it was used by orchidologists for medicinal purposes.
Most of them are made of ceramics, but copper ones have also been found.

2-2. The prototype of the present pot still

The original pot stills we see today were tabletop distillers, but various types were developed and improved, including bell, pelican, twin, triple-closed, turtle, and horn stills.
Until the early 16th century, glass and metal distillers were popular, but they were expensive and easily damaged.
Distillers made of ceramics were inexpensive and easy to manufacture, and they were used with a glaze on the inside to increase thermal efficiency.
Metal distillers used brass, white-eye, bronze, copper, and even toxic lead for durability and convenience.
As the price of copper dropped and became more readily available in the early 17th century, it became the preferred material for spirits due to its superior distilling qualities.

There is also a Coffey still still in operation today, albeit in smaller numbers worldwide, introduced in 1963 by Nikka Whisky’s Masataka Taketsuru with the dream of creating a blended whisky that would rival the home of Scotland. The “Café Malt” and “Café Grain” produced at the Miyagikyo distillery have created a buzz and are highly acclaimed around the world.

2-5. The first whisky blending in history

After this, until 1853, whisky was sold straight from the cask when it was finished, so there were sometimes complaints of inconsistencies in taste, even among whiskies from the same manufacturer.
Andrew Usher, a merchant in Edinburgh who wanted to sell whisky of the same quality at any time, came up with the idea of mixing single casks of Glenlivet whisky that he was dealing with, and succeeded in equalizing the taste.
This was the moment when the first ever blended malt whisky was born, and it can be said that he was the originator of blending.

The “Ushers Old Vatted Glenlivet”, commonly known as Smith’s Glenlivet, is completed, and Matthew Calbraith Perry leaves the Norfolk Military Port in the United States for Japan with it and American rye whisky.

3. Timeline of the birth of whisky

～History of Whisky in Japan～

Chapter 7: Before and after the battle

Share
Previous YOIYO – The 6th release! Lotte × Mars Tsunuki Distillery
Next Chapter 2. The Arrival of Perry｜History of Whisky in Japan 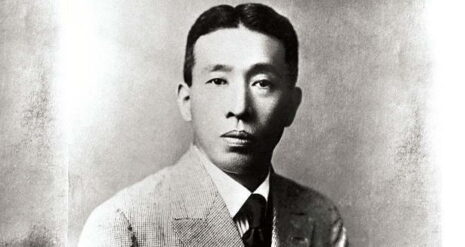 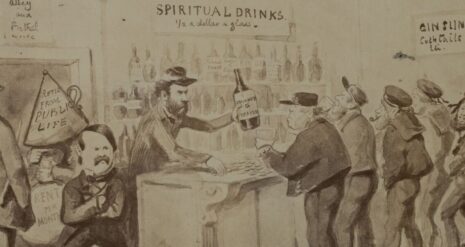 Chapter 3. Start of Whisky Imports to Japan｜History of Whisky in Japan 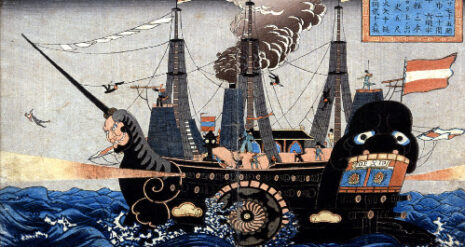 Chapter 2. The Arrival of Perry｜History of Whisky in Japan