This limited edition has been released every year since 2018.
The word “limited” (limited, special, slight) has been removed from the 2021 release and it is now called “Komagatake 2022 Edition.

Announcement of winners: On September 16, only winners will be notified by e-mail of the purchase procedure.

(Multiple applications for the same product will all be disqualified.

Single Malt Komagatake is produced at the Mars Shinshu Distillery, located at the foot of Mt. Komagatake in the Central Alps mountain range, surrounded by abundant nature and high-quality water. 2022 Edition” is a single malt whiskey bottled in a limited edition of 2022, consisting mainly of bourbon barrel-matured whiskey, accented with sherry cask-matured whiskey and port cask-matured whiskey.
Please enjoy the elegant and deep aroma and the smooth and pleasant flavor reminiscent of ripe persimmons.
*This product conforms to the Japan Western Whiskey Brewers Association’s “Standards for the Labeling of Japanese Whiskey.
Reference: Japanese Whiskey｜Single Malt Komagatake 2022 Edition｜Honbo Shuzo Co. 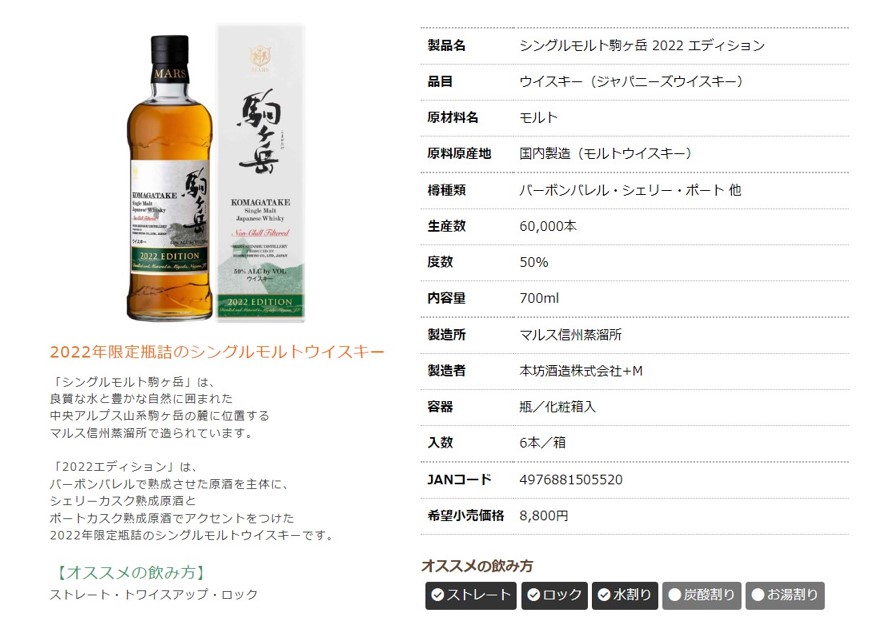 The Hombo Shuzo Brewery, which had been striving to make shochu, a Japanese distilled spirit, in Kagoshima, obtained a license to produce whisky in 1949. Since then, the company has held on to the dream of “someday making real whiskey that takes full advantage of the Japanese climate.
After several years of whiskey production in Kagoshima, in 1960, he established the Mars Yamanashi Winery, a factory for wine and whiskey production in Yamanashi. Then, in order to engage in whisky production in earnest, he searched for an even more ideal location.

The natural conditions for whiskey making are very demanding: cold climate with clean air, moderate humidity, and good quality water.
In 1985, after searching for land that met these conditions, Mars Shinshu Distillery was established at an altitude of 798 meters at the foot of Komagatake Mountain in the Central Alps, Nagano Prefecture, in search of the best environment for whisky production.
In 1992, distillation was halted due to sluggish demand for whiskey. In 2009, when Japanese whiskey was beginning to gain worldwide recognition and demand for whiskey was on a recovery trend, the distillery decided to resume distilling and started again in February 2011.
In September 2020, the distillery underwent a complete renewal for the first time in 35 years. The investment will be approximately 1.2 billion yen.
From May 2019, a new whiskey distillation building (including a barrel cellar) will be built to renovate aging facilities and improve the barrel cellar facilities with a view to increasing whiskey production, and a new visitor building will be built to sell original whiskey and goods, and existing facilities and equipment will be renovated.
The new whiskey distillation building has a total floor area of 1,996m2 (including the barrel cellar, which will hold approximately 2,500 barrels), and the visitor’s building has a floor area of 746m2.
Reference: Hombo Brewery official website Single Malt Komagatake is produced at the Mars Shinshu Distillery, located at the foot of Komagatake in the Central Alps mountain range, which is surrounded by high-quality water and rich nature. 2021 Edition” is a single malt whiskey bottled in a limited edition of 2021, vatted mainly with malt base aged in bourbon barrels and sherry casks.
Please enjoy its fruity aroma and gently sweet taste like ripe persimmon.

*This product conforms to the Japan Western Whiskey Brewers Association’s “Standards for the Labeling of Japanese Whiskey. Single Malt Komagatake Limited Edition 2020 is a single malt whisky bottled only in 2020, vatted mainly from malt base aged in sherry and American white oak barrels in the beautiful natural environment of Shinshu, Japan. The aroma of ripe plums wafts through the air, leading to a gentle sweet aroma of elegant honey and vanilla. In the mouth, orange-like fruitiness and a bitter taste reminiscent of cocoa are well balanced, followed by a subtly sweet and gentle aftertaste.

This product conforms to the “Japanese Whiskey Labeling Standards” of the Japan Western Whiskey Brewers Association. Single Malt Komagatake Limited Edition 2019 is a 2019 limited bottled single malt whisky, vatted primarily from malt base spirit aged in bourbon barrels in the beautiful natural environment of Shinshu. The aroma of ripe persimmon, apricot, and orange marmalade spreads, and you can enjoy the elegant and mellow flavor reminiscent of quince and melon with a clean and pleasant aftertaste.

*This product conforms to the Japan Western Whiskey Brewers Association’s “Standards for the Labeling of Japanese Whiskey”. Single Malt Komagatake Limited Edition 2018 is a 2018 limited edition bottled single malt whisky made from malt base spirit matured in bourbon barrels and American white oak casks in the beautiful natural environment of Shinshu, Japan. The aroma of ripe plums and flowers is harmonized with a hint of peat, and on the palate, you can enjoy a long and pleasant aftertaste with a citrus aroma. It has been about 7 years since the Mars Shinshu Distillery resumed distilling. The distillate has been matured over time. For this edition, we selected sake from bourbon and American white oak barrels that have been aged well for more than three years. This 2018 Limited Edition single malt is the forerunner of the future Mars Shinshu Distillery’s standard product, Single Malt Komagatake.
*This product conforms to the Japan Western Whiskey Brewers Association’s “Standards for the Labeling of Japanese Whiskey.”