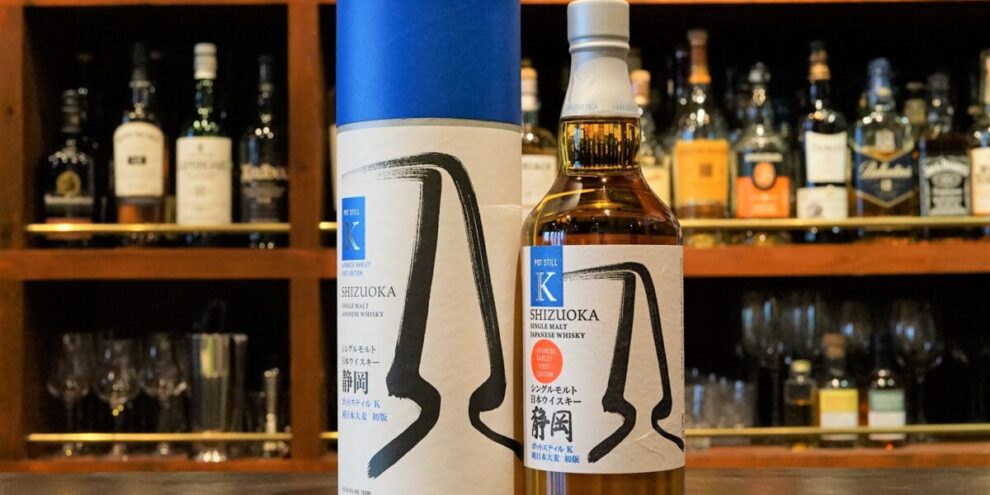 Prologue is over, and this chapter has finally begun! Following in the footsteps of Shizuoka Distillery’s first release, “Prologue K”, the “K” series consists of the original sake from distiller K.

In mid-June 2022, “Shizuoka Pot Still K Pure Japanese Barley First Release” was released. This is a special whisky made from 100% Japanese barley malt and aged for 3 to 5 years in the rich nature of the Shizuoka region.
This release is limited to 2,500 bottles sold in Japan. The suggested retail price is 18,150 yen (including tax), which is half the volume and more than double the price of Prologue K and Prologue W.

Established Gaiaflow Distilling Co. on October 8, 2014.
Construction of Gaiaflow Shizuoka Distillery completed on August 9, 2016.
In the same year, whiskey production started on October 28.
The distillery is located in the Tamagawa district of the Okushizu area of Shizuoka City, Shizuoka Prefecture, on the banks of the Abenakagochi River, a tributary of the Abe River, a first-class river.
Surrounded by beautiful 400-meter-high mountains at an elevation of around 200 meters, the temperature is always 2 to 3 degrees cooler than in the city center, making it a truly desirable location.
The building was designed with the theme of fusion of Japanese beauty and Western culture, and in collaboration with Derek Baston, an American architect living in Shizuoka, the interior and exterior of the whisky distillery are made of many Shizuoka woods, which are beautiful to the eye.

Shizuoka Distillery operates two first distillation machines called “K” and “W.” K is the historic Karuizawa distiller, which was manufactured in Japan in the 1950s. In November 2011, the legendary distillation machine was moved from the Karuizawa distillery, which had regrettably closed, to the Shizuoka distillery, where it was repaired and refurbished. The distiller’s graceful silhouette and the indirect heating of steam produce a light and floral tasting sake.

In the left foreground of the photo below is the W, probably the only “wood-fired direct distiller” in the world, made by Forsyth in Scotland.
This time, Prologue W is made from the original spirit distilled by this distiller. The very characteristic of direct-fired distillation is temperature. While the temperature for general indirect-heat distillation is around 150°C, the wood-fired direct distillation at Shizuoka Distillery is 800°C, which allows the distiller to produce a strong and aromatic type of malt base spirit.

The fermentation tanks are wooden vats made of local Shizuoka cedar. Shizuoka City is known for its forestry industry, and they chose to use locally grown cedar in the hope of creating a whisky that is uniquely Shizuoka.
The malt mill used to grind malt (barley malt), which is the raw material for whisky, has been moved from the Karuizawa distillery and is used in the same way as the “K” distillation machine.

Incidentally, a fantastic whisky that was made at the Mercian Karuizawa distillery, but never commercialized, was purchased by a British company and bottled in 2013 as “Karuizawa 1960.” It was sold for 2 million yen.It then sold for about 14 million yen at a Scottish auction in 2017. It is now clear that Japanese whisky is at the top of the target list for whisky collectors around the world.

Shizuoka has a warmer climate than Scotland, and the design dares to create a difference in temperature by installing windows in the ceiling of the cellar for lighting. Because of this, the original sake being aged in the cellar is expected to evaporate at least 5% per year in the Angel’s Share.

At the distillery, there is a tasting corner where visitors can sample (for a fee) the Shizuoka Distillery’s own sake and the first “Single Malt Prologue K.” The Shizuoka distillery also imports and sells whisky, and you can sample the Indian whisky “Amrut ” and the Scottish bottlers “Black Adder” and “Astamorris”. 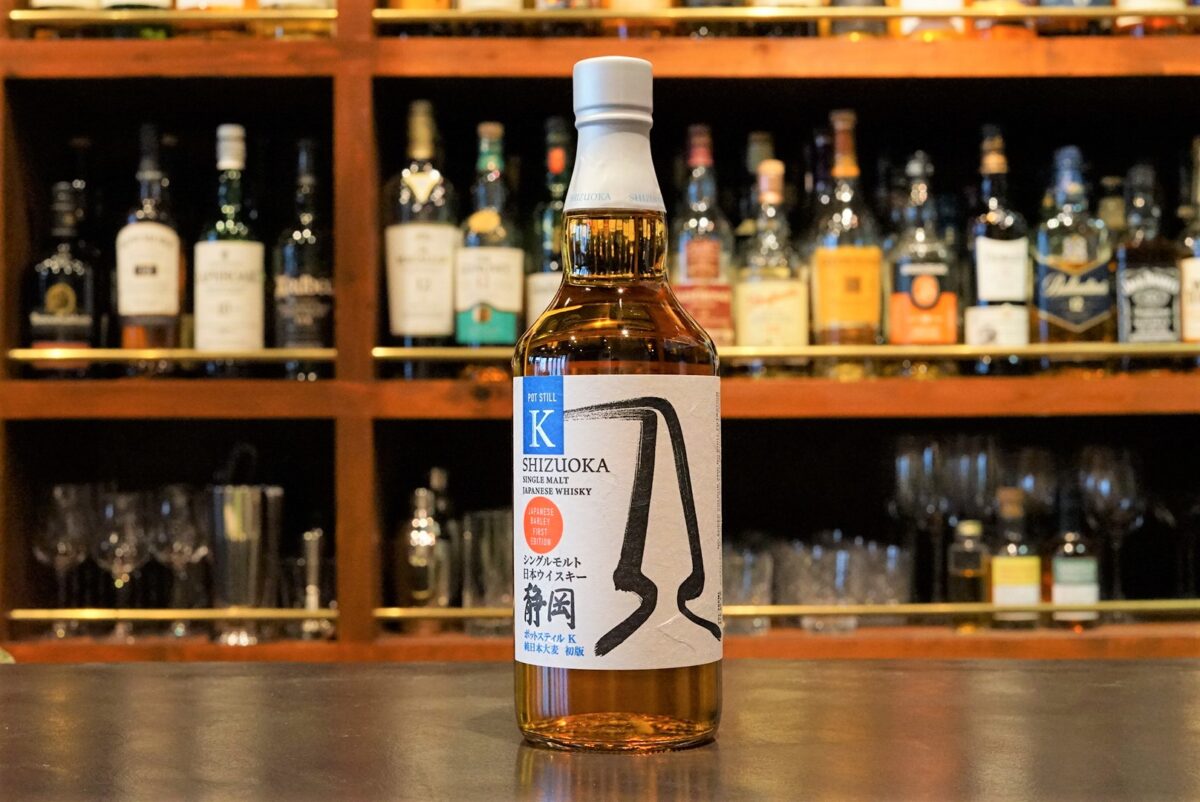 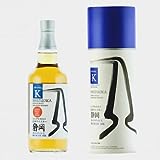 Only distiller K is used. 100% Japanese barley malt is used.

Shizuoka Distillery always separates the original whisky for each first distiller used and matures it for a minimum of 3 to a maximum of 5 years in the rich nature of Oku-Shizuoka to produce a beautiful pale amber whisky. This product is the result of blending various casks that meet the same requirements (Japanese barley malt, distiller “K” used).
Ingredients: 100% Japanese barley malt is used for the malt. Bourbon and wine barrels were used for the casks. This Japanese whisky is made using only Japanese domestic products from raw materials. 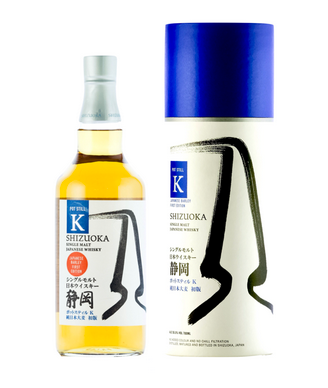 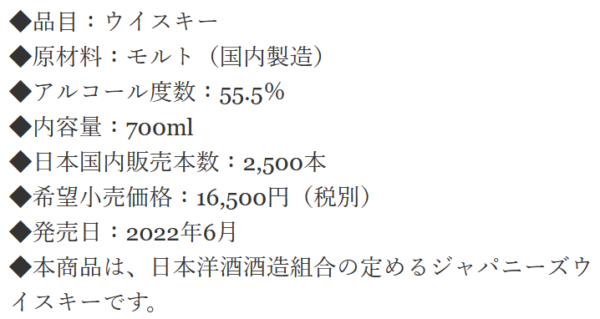 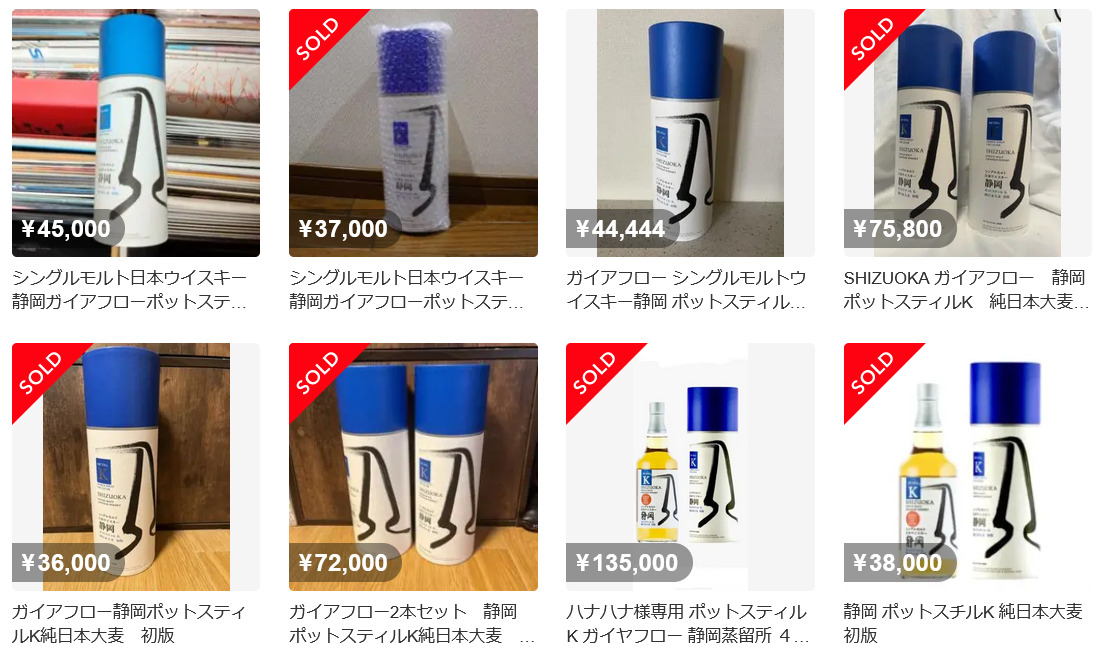 Even under these circumstances, Shizuoka Distillery is committed to making whisky with high-cost Japanese barley malt because of the flavor potential of Japanese barley and the importance of terroir (local character) as a Japanese alcoholic beverage. The whisky produced from Japanese barley has a delicate, soft, smooth, and sweet taste that is uniquely Japanese, and it is a whisky with a rich terroir that is different from barley produced overseas.