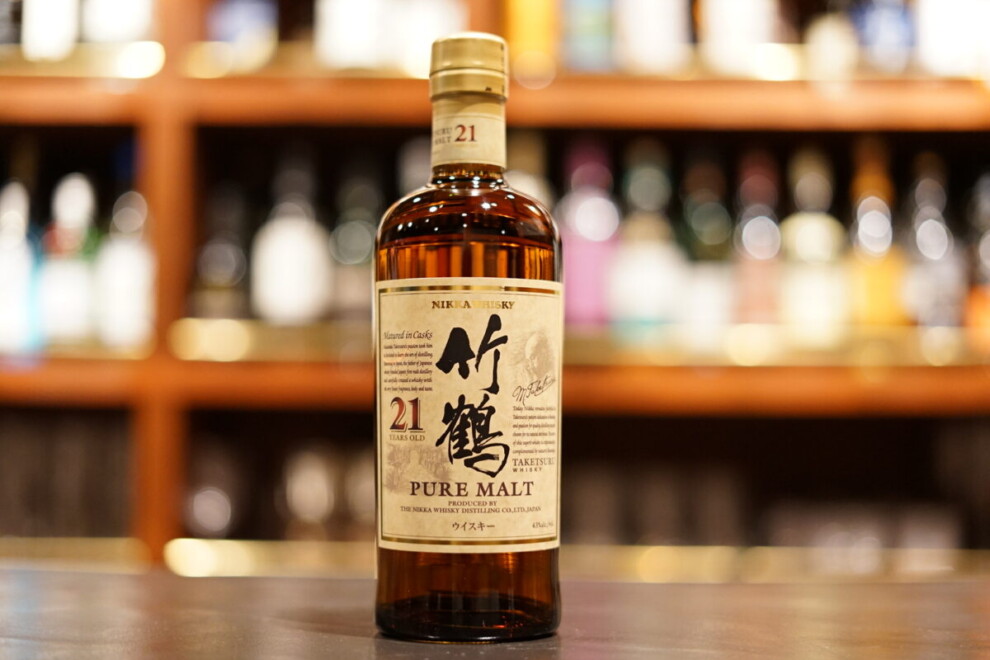 The Yoichi Distillery in Hokkaido is known as the Scotland of Japan. The distillery was established in 1934 by Masataka Taketsuru, also known as Massan, whose predecessor was Dainippon Fruit Juice Co. Masataka Taketsuru believed that a place similar to Scotland Cool and humid climate, rich water source and clean air Masataka Taketsuru chose Yoichi, located at the base of the Shakotan Peninsula, west of Otaru, from among various candidate sites. Masataka Taketsuru’s goal for his first distillery was to create a heavy and powerful malt whiskey. He was determined to replicate the whiskey-making methods he had learned at the distilleries of Scotland, without compromise. The symbol of this commitment is “direct coal distillation” . This distillation method is based on the method of the Longmorn distillery, where he learned it himself. If it is necessary to make genuine whiskey, we will protect it even if it is inefficient. Such passion, which can be said to be the origin of Nikka Whisky, and Masataka Taketsuru’s dream have been handed down to this day.

It has been about 30 years since the first distillery was started in Yoichi, Hokkaido. Masataka Taketsuru, who believed that “whisky becomes richer and more flavorful when it is blended with raw materials from different distilleries” desperately needed a second distillery. Taketsuru chose Miyagikyo in Sendai, Miyagi Prefecture. It is a lush green gorge blessed with two clear streams, the Hirose River and the Shin River. When Taketsuru visited this place for the first time, he drank some of his Black Nikka in the clear water of the Shin River and confirmed the taste. It is said that he decided to build the distillery on the spot. The pride of the Miyagi Gorge Distillery is its “café-style continuous distiller” . At the time of its introduction, this distiller was already considered obsolete. Because it was an old-fashioned distillation machine, it was prone to leaving behind miscellaneous flavors, but Taketsuru chose to use this old-fashioned distillation machine because the technology could transform them into the original aroma and sweetness of the ingredients. At the Miyagikyo Distillery, people who have inherited Taketsuru’s passion are still continuing to make various attempts to make whisky taste better. 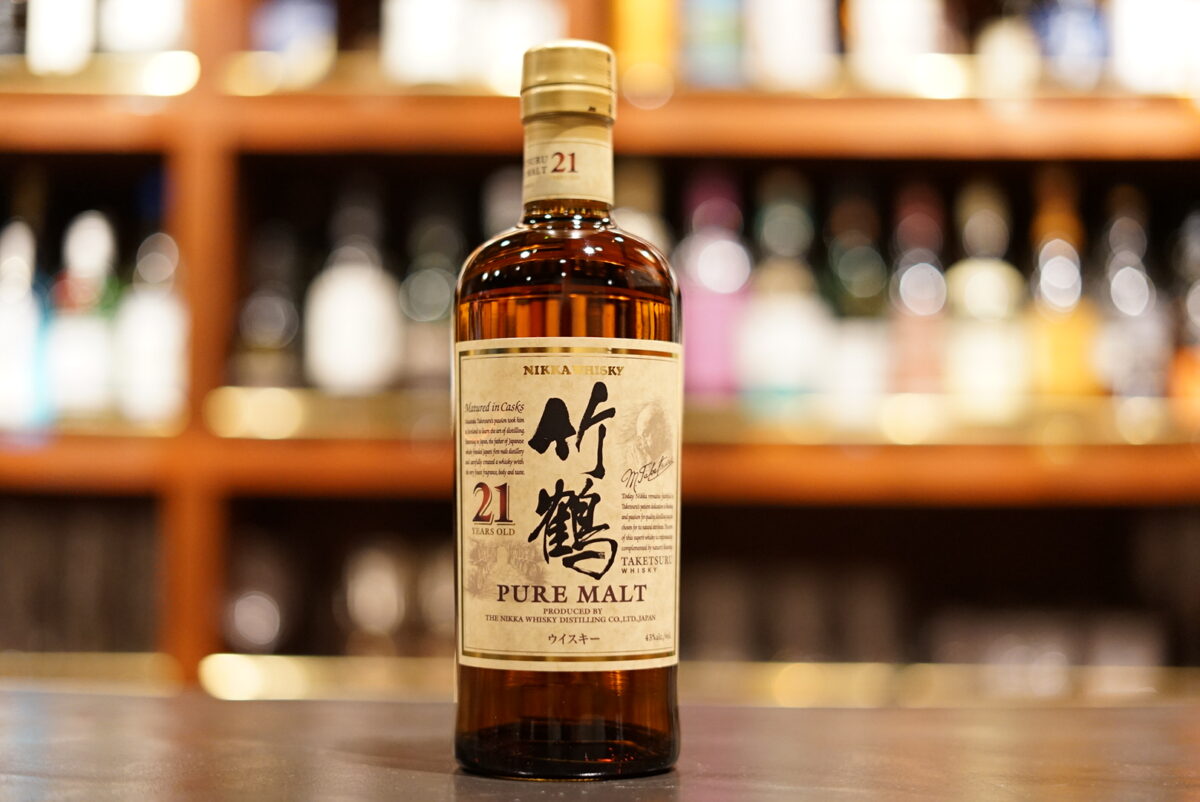 A marriage between the thickness of Yoichi’s malt and the fruity taste of Miyagikyo, achieved by long-term aging.
This whisky is made by blending only malt that has been matured for more than 21 years, and features the dense aroma and rich, lingering aftertaste that only pure malt can provide. It has a round mouthfeel and then gradually develops a deep, rich aroma. It has the calmness of a long-term aged whisky, the thickness of malt typical of Yoichi, and the soft fruity taste of Miyagikyo apples.
It has a soft fruity aroma like Miyagikyo apples, and a fruity aroma like well-aged peaches and tropical fruits. The aroma is rich and dense, with a rich and gorgeous barrel aroma.
The palate is soft with a hint of complexity and richness. The full-bodied aftertaste spreads widely and then changes to a dense and complex flavor. 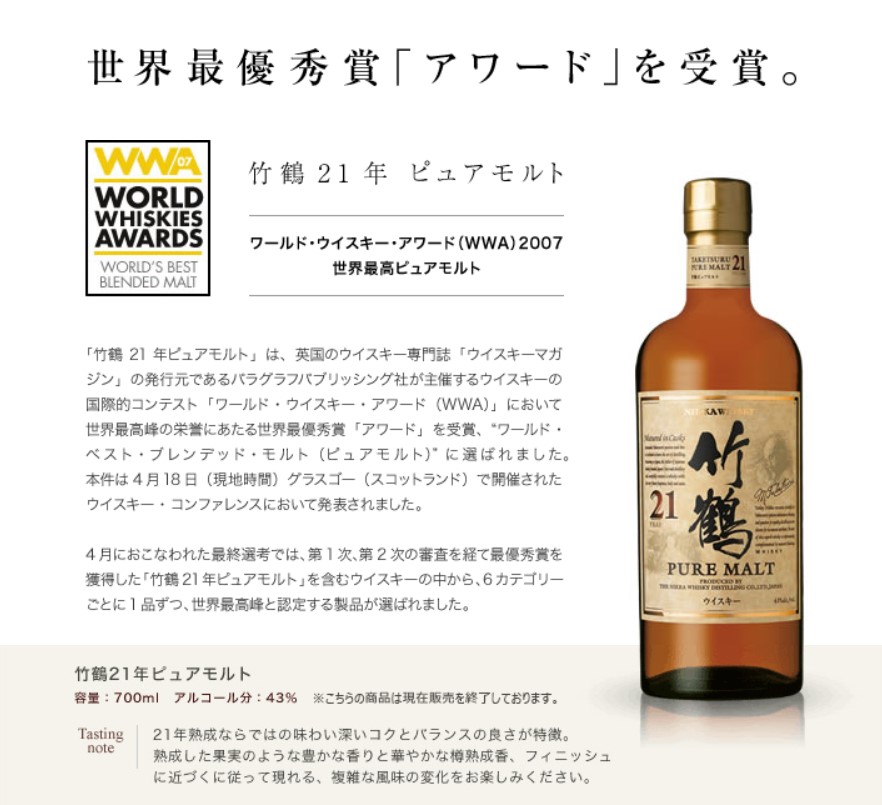 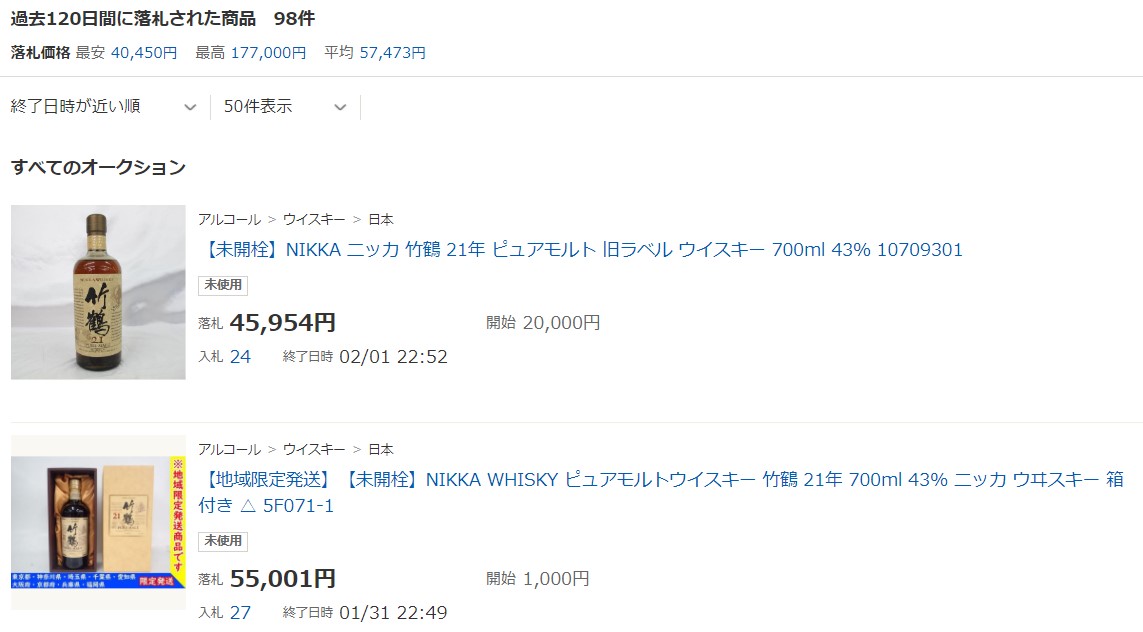 竹鶴21年ピュアモルト 箱無し 700ml
created by Rinker
¥70,000 (2023/02/06 21:16:55時点 楽天市場調べ-詳細)
Bar Shinkai, which is operated by this site, offers it at.
"Bar Shinkai" for Japanese whiskey in Toky...
Japanese Whisky Dictionary operates three BAR Shingai stores in Minato Ward, Tokyo. In addition to the Japanese whiskeys introduced on this site, they also handle domestic gin a...

First of all, drink this whiskey straight to feel the richness of the malt and the fruity flavor of the apples. Whether you drink it with water or on the rocks, the vanilla aroma fills your mouth and you can taste the barrel aroma, and you will enjoy the richness and depth of flavor and the complex aftertaste that only 21-year aging can provide. This whiskey has been discontinued, but many bars still have it in stock, so if you see it, be sure to try it.

As of March 2020, Taketsuru 17 year old, Taketsuru 21 year old, and Taketsuru 25 year old will become Sold Out Taketsuru Pure Malt (no age statement) will be renewed. The only whiskey that bears the so-called “Taketsuru” name is this Taketsuru Pure Malt New Label. As a result, the whisky sold by Nikka in its current form has been replaced by Vintage whiskeys (with age notation) have disappeared. The Taketsuru Pure Malt New Label will be sold in 22,000 cases per year, but it has been difficult to see it. It was announced in January 2021 DRINKS INTERNATIONAL ANNUAL BRANDS REPORT 2021 in the “WORLD WHISKY category” of the Nikka No.1 for 6 consecutive years In the “WORLD WHISKY category” of the

ニッカが圧倒的１位。サントリーが２位。DRINKS INTERNA...
2021年1月に発表されたDRINKS INTERNATIONAL ANNUAL BRANDS REPORT 2021の「WORLD WHISKY部門」で、ニッカが１位、サントリーが２位、その他、山桜、イチローズモルト、マルス、軽井沢がラン...
The new brand “Session SESSION” was launched last September. Is there any movement following that? Nikka has yet to show any significant movement this year, but is it time for us to get some information about the annual Yoichi and Miyagikyo limited edition products? I’m expecting a move that is as good as Suntory’s.

Please check out the other articles about Taketsuru.

[Review] Taketsuru 17 Years Old Pure Malt
Taketsuru is a whiskey produced by Nikka and marketed by Asahi. It was first released in 2000 by Nikka Whisky as "Taketsuru 12 Year Pure Malt" . At the time when &quot...
[Review] Taketsuru Pure Malt New Label
An incomparable whisky made by refining, combining, and bringing together malts forged in the northern sea and malts nurtured in the green canyons. It is a unique pure malt, whe...